"The median increase in net returns from grazing was 25pc." 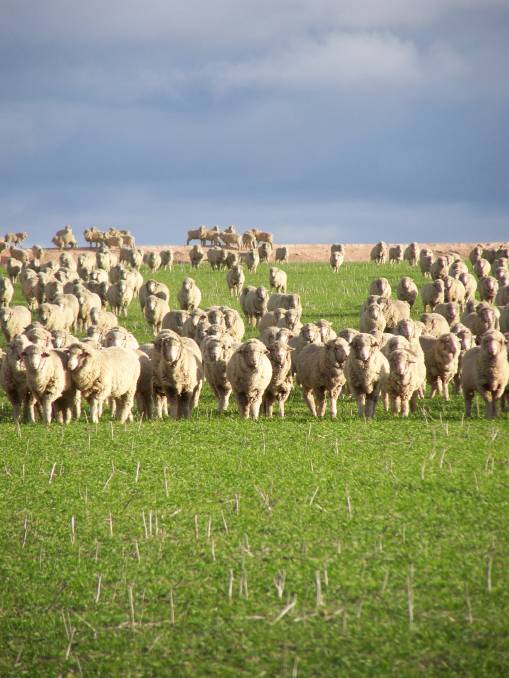 Sheep grazing a wheat crop. Research indicates that grazing crops can add up to $1000 per hectare to a farm's bottom line. Photo: GRDC.

GRAZING crops can add up to $1000 per hectare to a farm's bottom line, according to new research from CSIRO.

With high livestock prices, dual-purpose cropping has many advantages, both direct and indirect, including filling the winter feed gap and allowing extra spring pasture growth.

More than 10 years of experiments and simulation studies across the country has shown a wide range of cereal and canola varieties can be successfully grazed and recover to produce combined livestock and crop gross margins that exceed grain-only crops and increase whole-farm profitability.

"The median increase in net returns from grazing was 25pc and in one third of cases, net returns increased by 75pc or more," Dr Bell said.

"In the 87 canola grazing experiments returns were somewhat less, median 17pc, due to less grazing and higher grain-value and so increased economic risks from yield reductions."

According to the research, the biggest advantage of dual-purpose crops is when they are sown early, before the end of April, to utilise early season sowing opportunities.

Long-season winter cultivars sown at this time provide high yield potential, without the frost risk for sowing spring cultivars at that time.

The earlier sowing of the varieties will yield much more grazing opportunities, while after early May the dual-purpose varieties offer little advantage over the spring cultivars typically used for grain only production.

"In many cases, especially where the feed is being used to fatten or finish lambs or cattle, it is possible that accepting a grain yield penalty makes the most economic sense," he said.

"However, managing these potential trade-offs to optimise profit will be influenced by the relative value of grain or livestock feed in that season as well as your location."

The effect of grazing too late or leaving too little residual biomass, less than 0.5 tonnes per hectare, can be seen to affect the economic outcome.

Dr Bell said with spring wheat, yield was only maintained with later grazing if a large amount of residual remained and this did not match the economics of grazing hard earlier to provide time for recovery.

"In general, a much greater level of attention is needed to manage the timing of lock-up in spring crops as development is rapid and the plants less robust," he said.

"But grazed spring wheat and canola crops can widen the crop-grazing window at the farm scale."

Another benefit of dual-purpose crops is that they can provide valuable winter forage in livestock production systems and greatly reduce the frequency of feed gaps in winter, thereby allowing higher winter stocking rates.

According to the research, by removing grazing pressure on pastures at this time they can also increase subsequent pasture availability.

"The increased winter feed supply and the higher grazing intensity on dual-purpose crops allowed two to three times the area of pasture to be spelled which together enables increases in potential year-round pasture stocking rate."

The study found that up to 20pc of farm area could be allocated to dual-purpose crops while still obtaining the same number of grazing days per farm hectare.

There was also an added benefit of additional grain production adding significantly to farm profitability and production.

Allocating between 10pc to 20pc of the farm to a combination of dual-purpose wheat and canola grazed in sequence also has its benefits.

It was shown it could increase whole-farm sheep grazing days by 10 to 15pc, increase farm output by more than 25pc and increase estimated farm profit margin by more than $150 per farm hectare compared to pasture-only livestock systems.

"Introducing wheat or canola alone on up to 30pc of the farm is likely to reduce sheep grazing days per farm hectare, but still significantly increase whole-farm productivity by 10pc to 20pc and estimated profit margin by $50 to $100 per farm hectare," he said.

"Over the two very different experimental growing seasons, the estimated relative changes in wholefarm productivity and estimated profit margin were similar, indicating that these benefits are likely to be consistent over a range of years.

"Similarly, price sensitivity analysis also shows that these results are robust under a range of prices for livestock and grain."

When combined, these findings suggest that once whole-farm livestock feed-base effects are considered, large economic and productivity benefits can be attributed to dual-purpose crops when integrated into livestock production systems.

Much of the research that was undertaken was made possible by the significant contributions of growers through both trial cooperation and the support of the Grains Research and Development Corporation.