COVID-19 might have thrown a spanner in the works but it didn't affect the competition.

A TOTAL of 12 Western Australian beef producers have shared in $16,250 worth of prize money in this year's Harvey Beef Gate 2 Plate Challenge.

The awards dinner at Le Grande Motel, Albany recently saw the $5000 top gong going the way of Kevin and Sue Nettleton, Boyanup and ultimately the Limousin breed, through their Unison Limousin stud.

COVID-19 restrictions had played havoc with the regular scheduling of HBG2P events causing the cancellation of its annual field day and school's challenge at Willyung Farms, Albany, feedlot just four days before the gates were set to open in March and forced the rescheduling of its annual awards night usually held in May.

Consequently the function was restricted to about 60 gold sponsors, committee members and major prize winners, prompting for the first time a live stream of the event which was accessed by 38 logins.

But it did not affect the actual running of the competition, for owner-bred teams of two steers and one heifer, meaning unlike this year's AFL season, 2020 Harvey Beef Gate 2 Plate Challenge prize winners have tasted success on equal footing under the same rules and guidelines as all previous year's winners. And it did not detract from the success achieved with purebred Limousins by the Nettletons who finished first and fifth in the overall points tally, an amalgam of feedlot and processor profitability criteria and MSA Grading eating quality predictors, from a field of 68 teams and 204 animals, the most ever in the six-year history of the event.

As announced by evening MC Erika Henderson it was "proof apricot is better than black" with their Unison Limousin apricot team, pipping their black counterparts finishing on 269.022 out of a possible 375 points compared to 256.827 for the blacks, with all animals sired by Unison MV Lucrative and Unison TMF Arizona.

Individually, in the steer category totalling 136 head, the apricots ranked at six and nine, while the heifer ranked tenth out of 68 head, with the blacks comparatively ranking at 10, 35 and 12.

The Unison teams completed the one-two, apricot-black winning double in the feedlot performance category topping at 103 and 89.67 points respectively out of a possible 150 points. A delighted Mr Nettleton said they had been competing since year one because they saw value in what the competition offered the beef industry.

"There are no guestimations and no opinions, it is all just facts," Mr Nettleton said.

"It has provided one of the biggest boosts to the Limousin breed since we started with them in 1996.

"Last year the Morris's won with Limousin (Angus cross) and now we have seen Limousin feature in four out of the six winners since the competition started in 2015.

"We have worked hard as a breed to address our shortcomings, particularly with regard to temperament and we have made big improvements, the success of which is being seen here tonight." Mr Nettleton paid tribute to what was a genuine family effort thanking his son Ewen who started their 86-breeder Unison Limousin stud, wife Sue who manages the finances and son Campbell who selected the winning teams.

He also acknowledged the impact of the Vogt family, Maryvale Limousin stud, South Australia, from whom they source genetics and said their awards were proof persistence pays having once been disqualified for having a late cut steer and once finishing third last because their animals went overweight.

Second place overall went to another annual exhibitor, the John Galati Family Trust, Brunswick, with a team of Limousin-Angus cross which scored 264.651 points, just 4.731 points behind the winner.

Rodney Galati said his family first entered the event in 2015 to see how their calves stacked up against the competition and to prove a point to the processing industry and he was blown away when they won best overall team and best feedlot performance with the same breed mix.

Their team this year won best processor performance, sixth for feedlot performance and 11th for MSA grading, helping them to second overall, while individually their calves ranked at 4 (heifer), 20 and 88 overall.

Originally dairy farmers, the Galatis run 500 mostly Angus breeders with some Murray Grey infusion and have been using Limousin bulls (most recently from Lysgorran, Aldgate and Willendaise studs) for about 16 years, along with feedlotting about 3000 homebred and bought-in calves annually.

"We know these types of calves will perform every time and I certainly chase anything with Limo' for the feedlot," Mr Galati said.

"Limousin are perfect for the supermarket trade and as you can see this year four out of the top five placegetters had some Limousin in them.

"As far as selecting calves for this competition we basically look at entry weight to make sure they'll hit the sweet spot in the grid and that's about it.

"Given the great feedback you get and the amount of effort this committee puts in we will keep coming back each year to support them," he said.

Limousin breeders for 34 years, Murray and Jenny Fouracres, Hazlemere stud, Manjimup, have been entering the Harvey Beef Gate 2 Plate Challenge for four years and have had a podium finish on all but one occasion.

This year they finished third overall, the same as in 2018 and one better than 2019, with a tally of 259.699 points for their team of two Limousin steers and a Limousin-Murray Grey heifer.

The heifer was sired by Unison Leetern and the steers by Hazlemere Hercules. "We know how good Limo's are for their dressing percentage and that's important for the meat industry," Ms Fouracres said.

"One of my friend's heifers dressed 62pc.

"In France, where the breed originated, they were used as draft animals to pull carts so they were selected for muscle and muscle is meat."

Finishing in fourth place with Angus was competition first-timer Barney McCallum, Austin Downs, Napier, who made his presence felt by also taking out the top performing newcomer award.

The retired gynaecologist and obstetrician started his working life in agriculture in South Australia and has come full circle to return to his rural roots.

Dr McCallum credited much of his team's success to the efforts of his farm manager Andrew Collins and HBG2P committee members who encouraged him to enter the cattle from his 150-head breeder herd which came with the purchase of the property four years ago. "All the calves are fed in the same controlled environment so you know that it is the genetics that are showing through and which dictates the results," Mr Morris said.

"And the results certainly get noticed.

"Last year we had a feedlotter ring us up and take all our commercial calves after our win."

The team finished 10th overall, seventh for MSA Grading, 11th for feedlot and 37th for processing. Speaking on behalf of major sponsor Harvey Beef, Harvest Road general manager - agriculture Kim McDougall acknowledged all participants and praised the efforts of the committee in working through the COVID-19 disruptions of 2020.

"There are lots of winners here tonight," Mr McDougall said.

"This competition provides important feedback to enhance the overall quality of the beef supply chain and we remain proud participants and sponsors, as do Andrew and Nicola Forrest who have invested personally and professionally in their love of Australian agriculture.

"Part of that investment is on the menu tonight with our beef and our seafood.

"We thank Coles for their financial and spiritual support for WA producers as part of our beef family.

"This year has refocused attention that we are all in the food business and for consumers, food security and food safety is paramount, which is good for WA and Australian beef producers.

"Toilet paper might be important (in pandemic buying) but if you don't have food you don't need toilet paper." Collecting the awards for Mount Barker Community College which was the most improved entrant and the highest performing school were farm manager Jay Rowles (centre) and his wife Nova and MLA producer committee representative Richard Metcalfe, Manypeaks.

Since its inception in 2015, the group has run under the auspices of the Albany Agricultural Society Inc, but it has now flown the coup with the society's blessing to grow and evolve on its own.

As they set about building a new website, Harvey Beef Gate 2 Plate Challenge secretary Narelle Lyon said it was a natural progression in the group's evolution and it was time to get the big boy boots on.

"We are not a feeding competition, we have always been about education of our youth and of cow-calf producers to improve the profitability of their enterprises," Ms Lyon said.

"This will make it easier for us to apply for grants and to form other partnerships and collaborations with groups with similar goals and interests."

One of those recently formed partnerships is with the Oyster Harbour Group looking at nutrient run-off and soil health, with other partners being Regional Men's Health, Bovitech Veterinary Services and Clear South.

"We had 93 responses to a survey we did relative to that so there is definite interest in such a group," Mr Carroll said.

"We are extremely grateful for the support the Albany Ag Society has given us and we wouldn't exist today without them.

"Sincere thanks must also go to local producer and Clear South director Johanna Tomlinson, a specialist in natural resource management, business management and administration, who donated copious amounts of her time and expertise in setting up the incorporated body, to establishing good governance guidelines and our strategic planning framework for the future," Mr Carroll said. 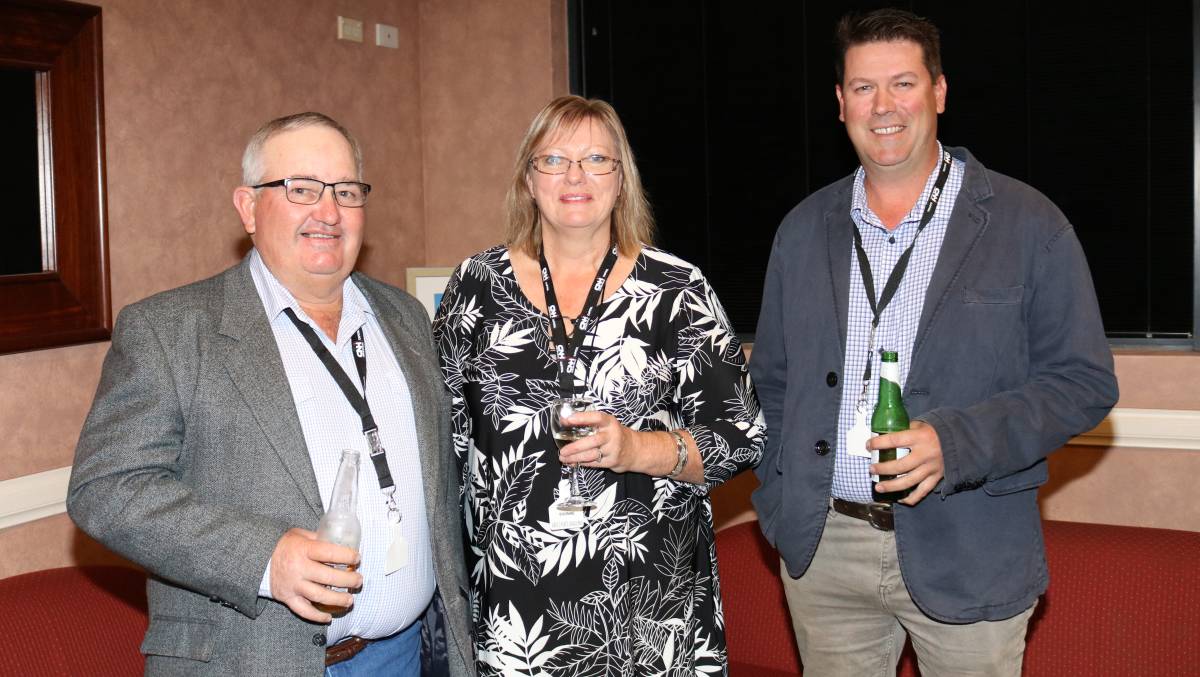