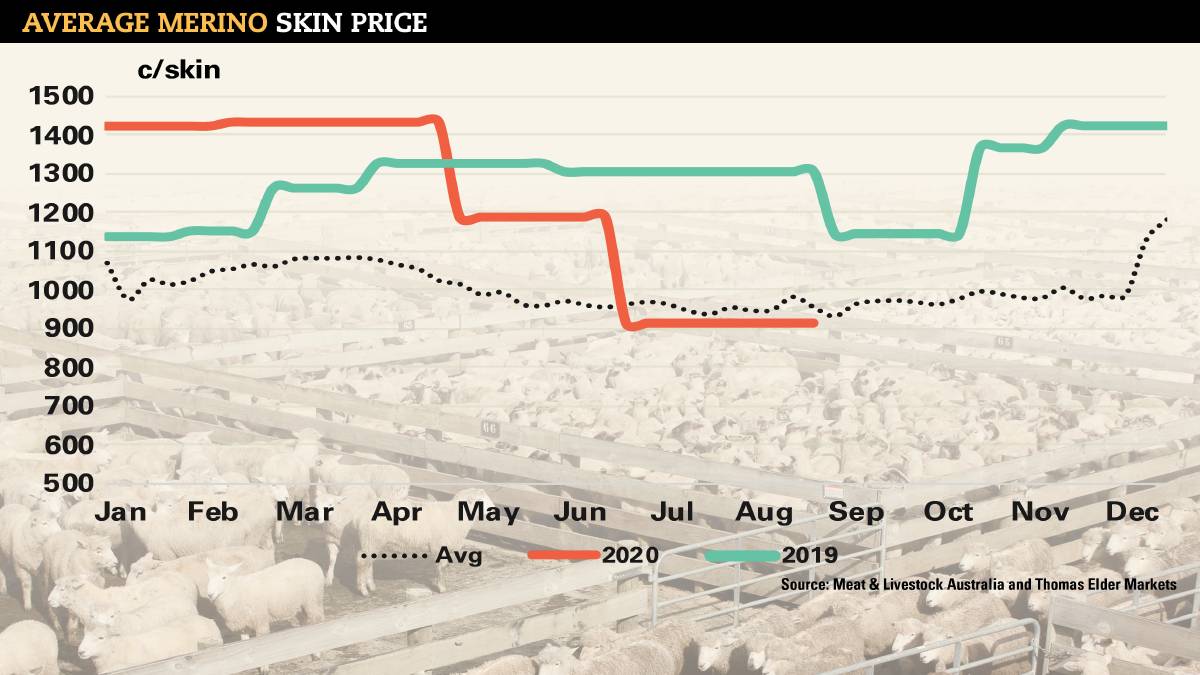 A myriad of factors, including COVID-19, have resulted in prices for sheep and lamb skins declining throughout 2020.

Prices for sheep and lamb skin have fallen dramatically throughout 2020 and some in the industry don't have a lot of hope that they will increase any time soon.

Prices for sheep and lamb skin have fallen dramatically throughout 2020 and some in the industry don't have a lot of hope that they will increase any time soon.

Thomas Elder Markets commodity market insights manager Matt Dalgleish said the average price for Merino skin had decreased by around 35 per cent since the start of the year when prices sat at around $14 a skin to now being at the $9 mark.

But Mr Dalgleish didn't believe this was a "complete price crash".

"If you look at the longer-term trend, in the last two decades prices have ranged from $5-$20 and the $10 mark is around the long-term average," he said.

"So where we're sitting now is just below that long-term trend."

"This is the first time in nearly five years they've been back below $10," he said.

He said the significant downward trend had been occurring for the last six months and that a range of factors were to blame.

"Sheep skin is mostly used in fashion apparel, like slippers, gloves and hats, and with the global situation the way it is, there's less wealth out there to buy these items," he said.

He said vegetable matter (VM) played a large part in the price of sheep skin.

"Once you've taken into account micron, VM is the biggest price driver," he said.

And on the back of better seasons in parts of the country that had been in drought, he said there would be more VM around.

"That might lead to a bit of a seasonal discounting of prices," he said.

"It's not uncommon to see prices ease in late winter, early spring.

"But for the last few years, for most of the season the price has remained above average."

With heightened lamb supply predicted over the coming weeks, prices could fall even further.

A supermarket lamb buyer who wished to remain anonymous said he first noticed the price of sheep and lamb skin decreasing just before Christmas last year.

He quoted current prices for sucker lamb skin at $1 each, a significant decrease from the same time last year when they were closer to $10.

He said the market was heavily reliant on China so their subdued buying activity had hit prices hard.

He predicted prices would be "ordinary" for "a long time" but the situation was fully dependent on the world economy and how long that took to recover.