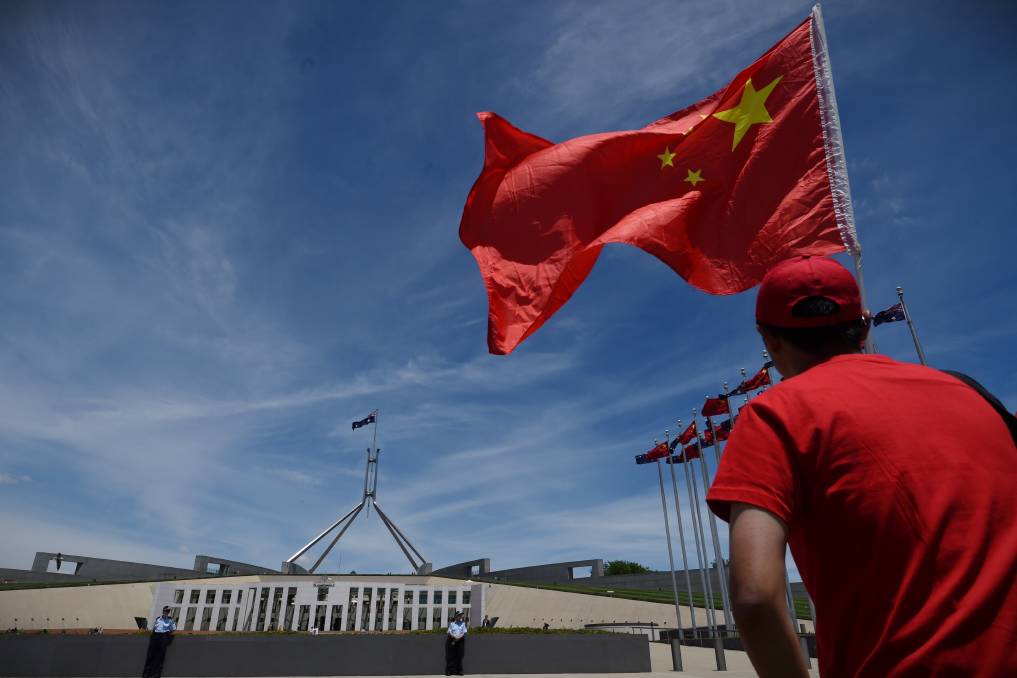 STRAINED RELATIONSHIP: China-Australia relationships are at their lowest ebb in recent history, and thiat's unlikely to change soon, according to a former senior diplomat..

A prominent former Australian diplomat says it's difficult to see how relations with China can improve, in the current environment.

In the latest development, two Australian journalists, working in China, have arrived back in Sydney, after being banned from leaving the country until they answered questions about detained television presenter Cheng Lei.

Australian journalists rushed out of China

Authorities allowed Michael Smith and Bill Birtles to leave China on Monday night, after they agreed to submit to an interview by China's Ministry of State Security.

The Chinese government has recently slapped punitive tariffs on barley, accused Australian winemakers of dumping products and closed its borders to beef, from several Queensland processors.

The federal government has announced it intends setting up a public register where all existing government to government arrangements would have to be disclosed, then reviewed by the Foreign Minister.

Under the Foreign Relations bill agreements, such as Victoria's Belt and Road Initiative, could be terminated if deemed adverse to Australia's foreign relations or inconsistent with foreign policy.

But former Australian Ambassador to Korea and deputy head of mission in Beijing's Australian embassy, Colin Heseltine, said it was difficult to see how relations could improve, in the current environment.

"The Australian government has said it wants to see a constructive and cooperative relationship with China, but this is unlikely to happen any time soon,' Mr Heseltine said.

"China will not stop doing the things that Australia opposes, and Australia will not become less opposed to these.

"Relations are now at the lowest point in recent history, and this is unlikely to change soon.

"The best approach for the federal government would, in my view, be to convey its concerns about Chinese actions and activities more calmly and quietly - less megaphone diplomacy, which is never likely to have any positive influence on a country of China's size and stature.

Mr Heseltine said other regional countries such as Japan, Singapore and Indonesia, all of which had problematic issues with China, had managed to convey their concerns while generally avoiding a severe and damaging downturn in relations.

"China's more assertive approach to its external relations over recent years, along with its tougher approach to domestic dissent, has given rise to concerns in many western countries," he said

"The Trump Administration's strong opposition to China on trade, technology and security issues, and the circumstances of China's handling of the COVID-19 outbreak, have also played a significant part in building an atmosphere of hostility towards China.

"In Australia, perceptions of interference in domestic politics and in universities have been highlighted by certain academics, politicians and media commentators, and have added to growing mistrust towards China".

He said it was unfortunate that had led to a situation in which normal and legitimate forms of exchange with China were being questioned, overlooking the enormous significance of Australia's economic relationship with China.

"The simplistic calls by some to find new markets, without any accompanying market analysis, to reduce our trade dependence on China don't help.

"Business leaders who speak up in support of a strong economic relationship with China are accused by critics of undermining Australia's national security interests."

Instead, it was a domestically driven economic strategy, to utilise excess industrial and infrastructure capacity and to integrate China more into global supply chains.

"Without going into the validity of these competing claims, it is not surprising that those who are disposed to view China as a threat would see Victoria's MoU on the BRI in a negative light, despite its non-binding and economic-focussed content.

"It is also significant that the Federal Government, while deciding against formally signing up to the BRI, has welcomed in principle the involvement of Australian companies in BRI projects."

Mr Heseltine said more detail needed to be known about the content of the proposed Foreign Relations Bill and how it would be implemented before assessing its impact.

"If it is simply a register to enable the Federal Government to understand and monitor the extent of linkages between Australian and overseas organisations (especially Chinese ones, towards which the proposed bill is targeted) it should not be a cause for concern,' he said.

"But if it becomes a device to close off, or discourage, valuable international exchanges, it will be detrimental to Australian interests.

"It is difficult to assess with precision the extent to which Chinese actions against Australian commercial interests are due to the deteriorating bilateral relationship.

The recent barley and wine anti-dumping actions, and the ban on specific beef processors could be explained on routine technical grounds.

"However, their timing and frequency certainly suggest that other factors are at work,' he said.

Put another way, if the bilateral relationship with China was in good shape, would all of these negative issues have arisen at this time?

"In June we asked what action you would take to ensure there were no boycotts or tariffs imposed by the communist government in China on the importation of Victorian dairy or wine?" Mr Davis said.

"Or is this just a one-way street for Chinese construction firms?"

Agriculture Minister Jaclyn Symes has told state parliament the Belt and Road Initiative is not a mandatory agreement.

"It is a facilitation of working arrangements,' Ms Symes said.

.She said she would soon be holding a meeting with Wine Victoria to discuss future trade options, whether they be with China, or anywhere else in the world.

"Am I concerned about restrictions on agricultural products from Victoria into China?" Ms Symes said.

"Of course I am - everybody in the agricultural space is.

"We will continue to work with nations and states that will take our premium wine and continue that strong advocacy."

China is not a particularly big market for Victorian barley, with the bulk of exports coming from Western Australia, according to Thomas Elder Markets analyst Andrew Whitelaw.

"However, the removal of the market will have flow-on effects in that there are few places for barley to transported to, which will maintain a ceiling on pricing levels,' Mr Whitelaw said.

"Luckily Victoria has a domestic market."

The average Victoria production is 1.9million metric tonnes, with the record in 2016 at 3mmt.

This year it is expected that Victoria will produce between 2.2 and 2.6mmt.

Ms Symes couldn't detail any action she had taken for Victorian producers as 'trade is certainly a Federal Government matter'.

"We have learned the Agriculture Minister has sat on her hands for nearly four months and failed to stand up for Victorian producers," Mr Walsh said.

"These punitive tariffs have shut down Victorian barley exports to a major trading partner, despite Daniel Andrews' promises on the 'benefits' of Belt and Road.

"Many producers had completed their planting program when the tariffs were enforced, but now have a severely contracted market to export to.

The BRI is a crucial pillar of China's economic and foreign policy which sees Chinese companies paid to build Victorian infrastructure.

It claims to promote "trade development and market access...especially for agricultural products".

Mr Walsh said the Victorian economy was reeling from the impacts of coronavirus and a strong agriculture sector would be at the heart of recovery.

"Chinese markets are an important trading partner for Victorian producers, but it's clear this dodgy Belt and Road deal isn't in our best interests," Mr Walsh said.

"The tariffs on barley and threats to target more of our hard-working producers shows Dan's deal is all one-way traffic that's running over the top of Victorian farmers.

"Victoria is prepared to throw the federal government under the bus when it suits them, but the Ag Minister's failure to act is only hurting our Victorian producers."

Have you signed up to Stock & Land's daily newsletter? Register below to make sure you are up to date with everything that's important to Victorian agriculture.