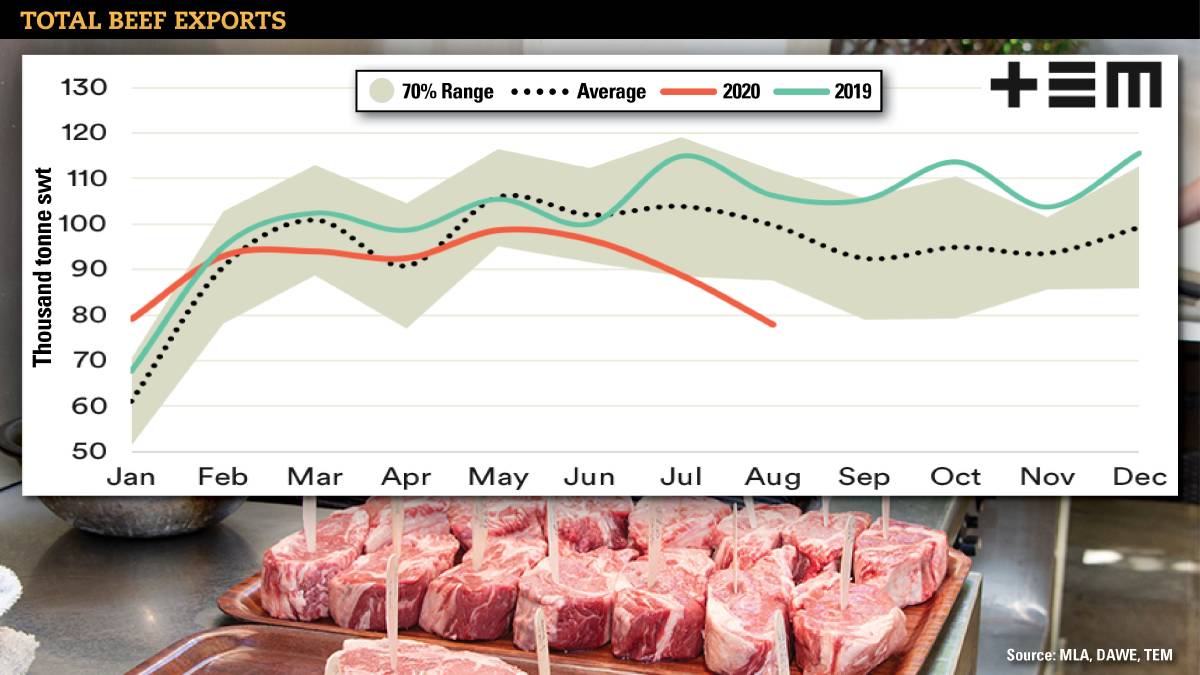 SHRINKING beef export volumes are the result of a super tight supply of cattle from a producer base hell bent on rebuilding rather than any slip in how much key customers are asking for, or are willing to pay.

That's the word from beef market and trade experts in the wake of August beef shipping figures that dropped to the lowest monthly volume this year.

Prices remain solid, indicating demand has not been substantially knocked around by the pandemic or recession.

With plenty more months of tight cattle supply ahead, the key question the current trade picture raises is which markets will Australia hold dear and which will it concede market share in.

And so attention is turning to how other beef-producing nations are travelling and where will they likely grab market share from Australia.

That's the result of a combination of five Australian plants now suspended, the triggering of our trade agreement with China's safeguard in June and ongoing political tensions.

There have also been reports of China not wanting to take product from plants that have had COVID-19 because of a perceived food safety risks, which has cut big Victorian operations out of the mix.

Yet China is still reeling from the meat supply gap delivered by African swine fever, so that begs the question of who is filling the gap.

Manager of commodity market insights at Thomas Elder Markets Matt Dalgleish, in an article titled 'What's Wrong Me Old China', reported total meat import flows into China for the first half of 2020 from Brazil are up 140pc, from the United States it is up 544pc and from Spain its up 204pc.

By comparison, Australia is up 24pc.

Mr Dalgleish describes it as a 'worrying trend'.

Other analysts agreed there was concern about losing market share in major markets.

"When Australian cattle production ramps up again in a couple of years, it might take some work, and lower relative prices, to get product back into major destinations," Mr Brown said.

ALSO SEE: Calls for beef to 'ditch China' are simplistic

Brazil and the US are where most are keeping a close eye.

"If their domestic consumption falls away, that will leave a lot of surplus to push onto export markets."

China now represents 41pc of Brazil's total exports and Rabobank expects those volumes to remain strong for the coming months.

One positive is Brazil has the ability to hold onto cattle longer if the price drops away, due to additional carrying capacity at the moment, Mr Gidley-Baird said.

"That may go some way to preventing a massive build-up in numbers that might lead to any sort of market flooding down the track, assuming we see some correction in Brazilian domestic consumption early next year," he said.

In the US, weekly fed slaughter capacity has recovered to 98pc of pre-pandemic levels and the 10pc decline in the US dollar since the highs of late March are providing support to beef exports, the Rabobank report said.

Asia continues to be the focal point, with increased exports to Japan, which is one of Australia's highly-prized markets. The US now has the same tariff rate into Japan as Australia.

Australia's August tonnage to Japan fell to 19,661, which Mr Wilcock said was only the second time it had dipped below 20,000t, January excluded, in the nine years he'd been keeping count.

Meanwhile, the drop-off in Australian shipments to the US was down more than 20pc on the previous month.

Rural Bank's September Insights Update for cattle says demand from the US for Australian beef could also weaken as the summer grilling season comes to an end and local production increases.

"In addition the appreciation of the Australian dollar is expected to reduce the competitiveness of Australian beef," it said.