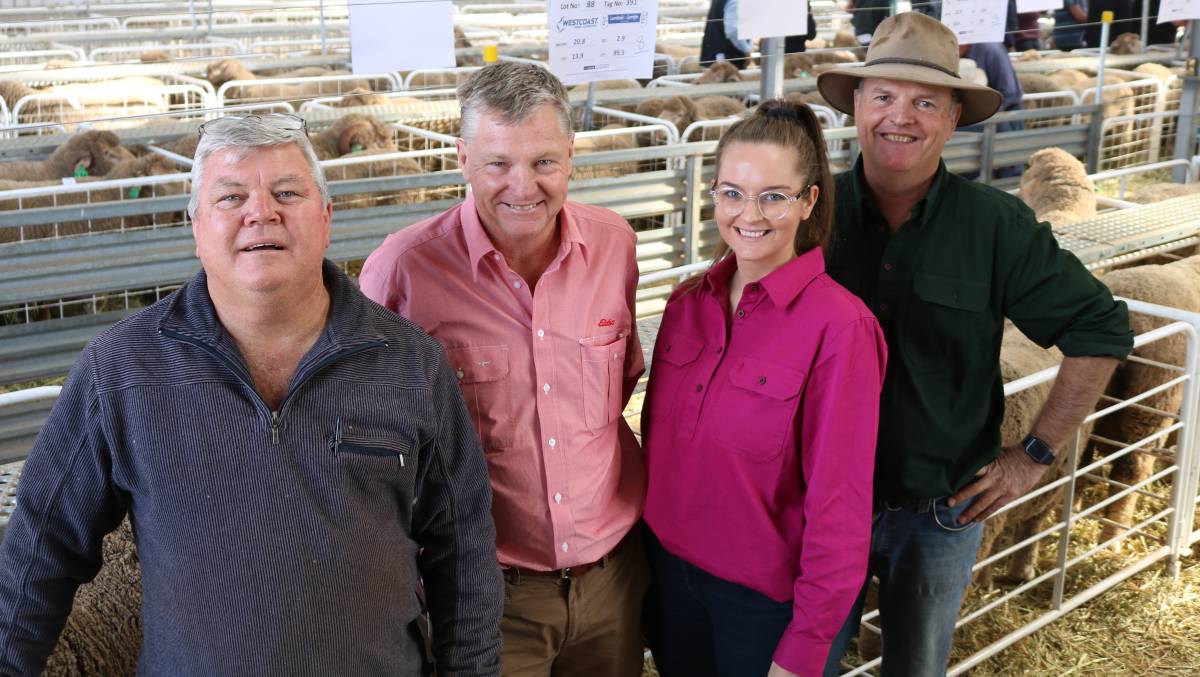 IT was a day of firsts when the Lewisdale-Corrigin and Eastville studs joined forces to sell under one roof on-property at Dudinin last Friday where Poll Merinos claimed top price honours in both catalogues at $4200 and $4700 respectively.

Having purchased the Eastville stud last year from Wickepin based Brett Doncon and family, it was the inaugural offering for Matthew, Shirley, Luke and Daniela Ledwith under their family banner.

And while they have owned the Lewisdale-Corrigin stud for a number of years, it was the first time they had put the team up on home soil, having previously sold in the annual Corrigin Breeders' ram sale.

Apart from the obvious logistical and biosecurity benefits, coupled with less stress for rams being in familiar surrounds, it afforded buyers a wide selection of quality Merino and Poll Merino rams from multiple bloodlines but with a common breeding philosophy. 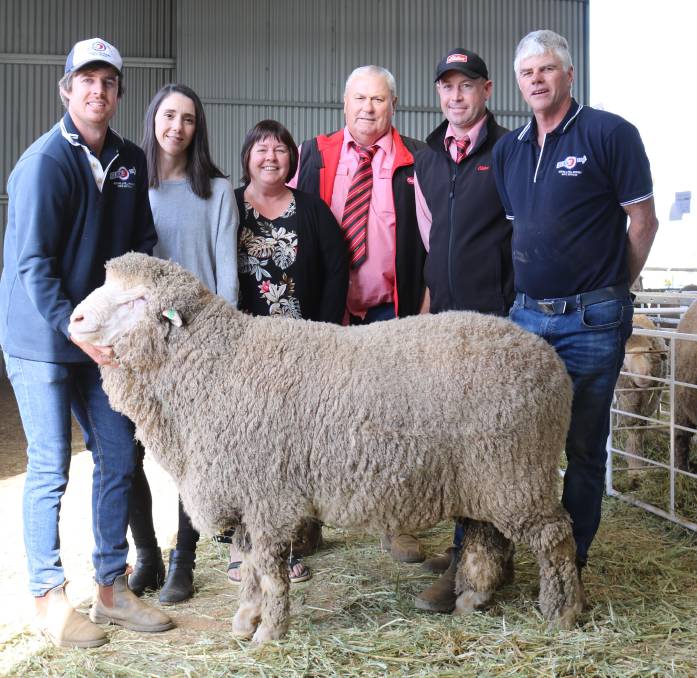 And while there was some effect on price and clearance due to a lack of feed and water, forcing reduced ewe numbers for some clients and others making a wool price-driven decision to mate their entire flocks to meat breed sires for one season, it proved a good move. 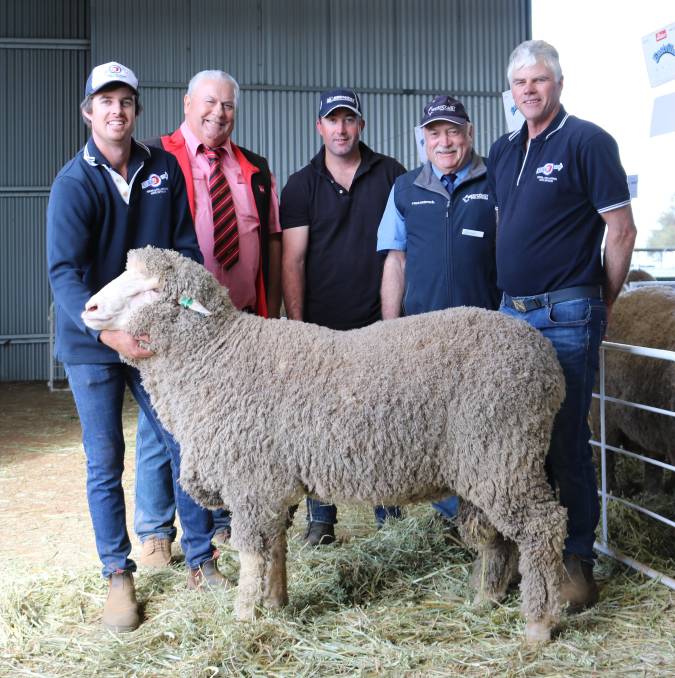 As was the case in past years the Lewisdale-Corrigin team was entrusted to the care of Westcoast Wool & Livestock, while the Eastville team was in the marketing hands of Elders, a trend continued from the Doncon era.

In an up-down selling format Preston Clarke, Elders and Chris Hartley, Westcoast Wool & Livestock, were the day's auctioneers, each taking centre stage on the rail for their respective runs which were interspersed right throughout the 214 head catalogue.

The only deviation was for the offering of the 28 shed prepared two-tooths of both persuasions which headlined the sale and were all put up under the call of Mr Clarke. 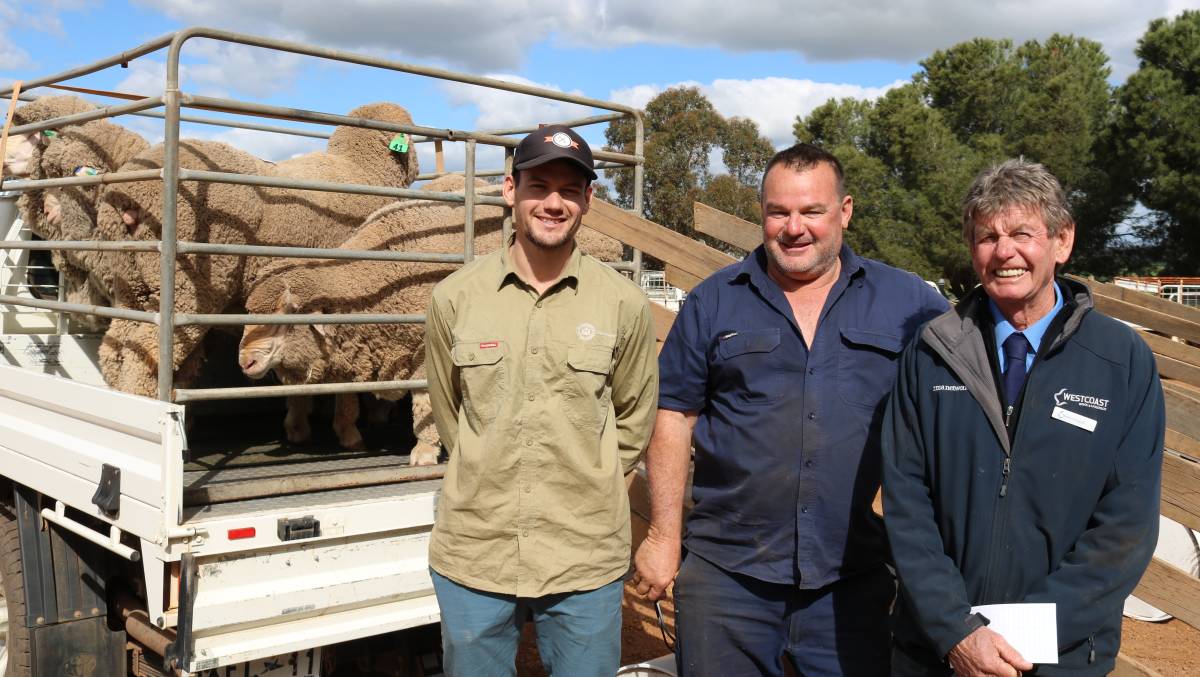 With their clean, soft, bold crimping wools (there was nothing under 99 per cent comfort factor) and good structure for well grown, carcase orientated bodies, they met strong demand.

Not surprisingly it was where the day's top prices were forged and where mostly long-time loyal supporters of both studs started their buying sprees.

Bucking the trend was the ram in lot one, a tall, sirey Lewisdale-Corrigin Poll Merino which was knocked down for the day's second top price $4200 to first-time buyer from the stud but Ledwith (Kolindale) regular, Rockdale Farming Co, Muntadgin.

Buying through Elders Merino consultant and classer Kevin Broad, Rockdale manager Dave Davis said they had seen the son of Kolindale 355 at the recent Katanning Sheep Show and tried to buy it privately.

Unsuccessful there they followed it to the on-property sale and came up trumps on the growthy 22.4 micron youngster which also tested 3.3 SD, 14.7 CV and 99 per cent CF.

"This is really a very good ram for structure, scale and wool quality and will complement the Rockdale sheep very well," Mr Broad said.

Enjoying a good season, Mr Davis said the Rockdale enterprise comprised about 4500 ewes, 80 per cent of which were mated to Merinos and the remainder to White Suffolks. 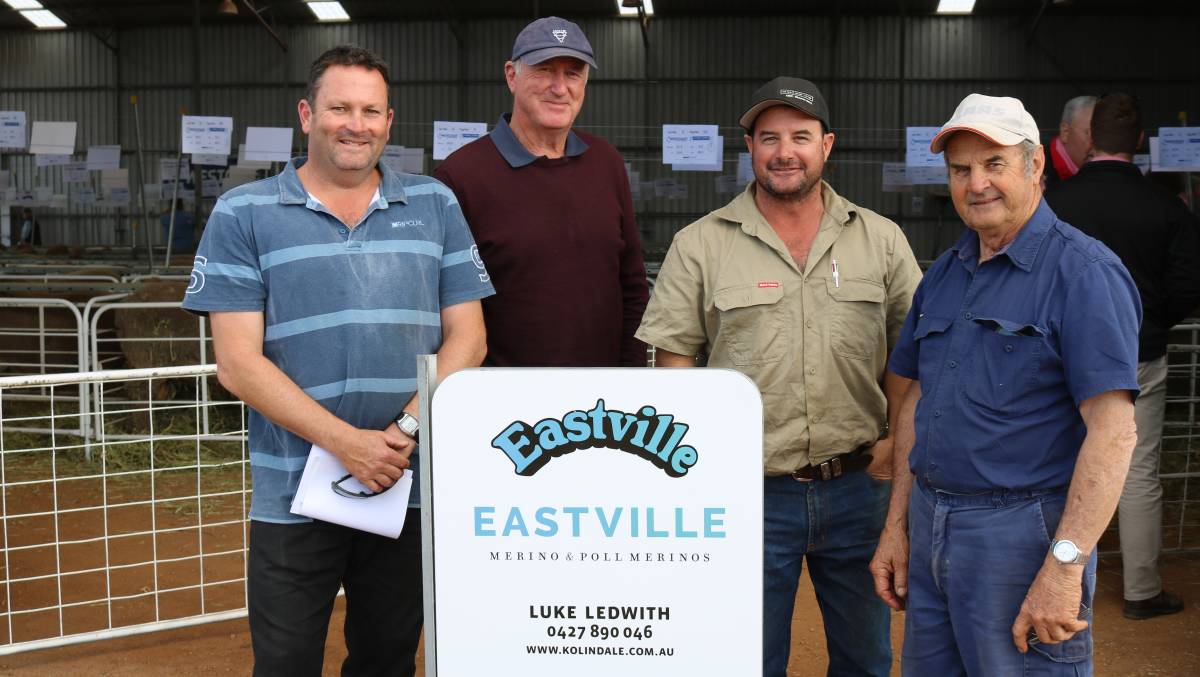 Mr Broad again figured in this sale, providing advice and bidding on behalf of the Kellys who had only seen the ram in photos and videos.

"He's got a great outlook, a very sirey muzzle, soft skin and a deep body with a well-balanced carcase," Mr Broad said.

"He goes back to Ashrose Blue Print bloodlines and will suit the Kellys beautifully."

Having had a long time connection with Eastville, Mr Broad commended the Ledwiths on the job they had done in preparing the team in their first year at the helm.

"They bought the ram lambs as part of the stud purchase last year so it's the Doncon's breeding but they have got some weight in them and kept the wools looking bright.

"When you see buyers from around the higher rainfall Wandering and Pingelly regions returning and bidding up as actively as they did today you know the wools have to be sweet and right," Mr Broad said.

Those buyers included D & D Warburton, Wandering, who paid the top price for an Eastville Merino, $2300, on the way to securing a team of 10 rams, Adam and Alf Watts, LR Watts & Co, Eastville clients of 10 years who finished with 16 Polls and Kevin and Craig Cousins, Dryandra Farms, west Popanyinning, who were successful on eight Polls.

The Dryandra father and son team said they have been regular buyers of Kolindale Poll Merinos for about 10 years, but liked the look of the Eastville type and decided to give them a try, ahead of topping up at the upcoming Kolindale sale at the same venue in 10 day's time.

"They are a similar type of sheep and were a good price" Mr Warburton said.

"The wools had plenty of style and crimp with a bit of a greasy tip to handle our wetter country."

Those favouring the Lewisdale-Corrigin Poll Merinos included KA & CM Stephen, Moorine Rock, bidding to a top of $3100 for a team of five rams in the Westcoast Wool & Livestock catalogue.

Kim Stephen said they had been clients of the stud since 1981 and stuck with them because they did the job well for them.

Client of 35 years Peter Scott, Scott Grazing, made the trek from east Chapman to secure five rams to a $2300 top, while closer to home Hyden producers AT Lane & Sons and AW & AP Latham finished with 16 and nine rams respectively.

Lewisdale-Corrigin and Eastville co-principal Luke Ledwith said given seasonal and market forces he was happy with the first up result and thanked buyers for their continued loyalty, especially Eastville clients who had made the journey to partner with his family for the first time.