The stud has a philosophy of a top preparation & commitment to genetic improvement. 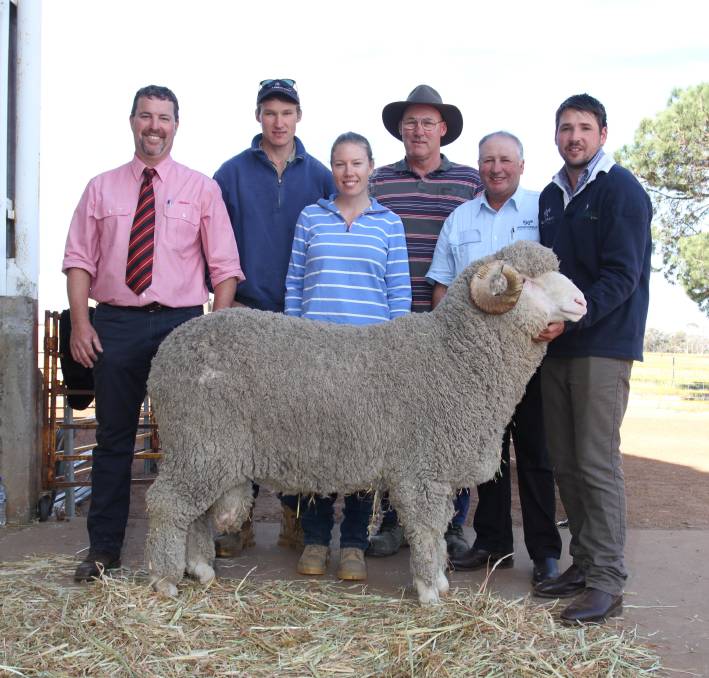 WOODYARRUP celebrated its 100th birthday as a stud in emphatic style recently with an outstanding result at the 13th annual Woodyarrup on-property ram sale at Broomehill.

Woodyarrup's philosophy of a top preparation and commitment to genetic improvement was on display with an impressive catalogue of 252 extensively measured, high ranking, large framed Merino and Poll Merino rams with productive stylish wools.

And they are obviously paying dividends for the stud's loyal long-term clients who joined new buyers at this year's sale to bid strongly on their selections through to the final lot, recording a solid clearance at extremely strong values.

This handed the Dewar family the best milestone birthday gift for the stud they could have hoped for, particularly given feed and water shortages faced by the State's woolgrowers this year, along with a downturn in the wool market.

Led by auctioneers Nathan King and Preston Clarke, the Elders selling team cleared a total of 241 rams (96pc) at auction to average $2140.

This saw an increase in the number of rams sold at auction at only a marginal reduced average from last year where 239 of 248 rams (96pc) sold under the hammer to average $2203. The sale opened with a run of 35 regulation March shorn, shed-prepared rams and by lot three the Doyle family, Wylivere Farms, Corrigin, had made it back-to-back top-priced ram purchases when they placed the $12,500 winning bid on the upstanding late June 2019-drop ram.

The Doyle family has been buying sires from Woodyarrup for the past six years to go into the operation's nucleus breeding program to breed their own flock rams.

They will join a total of 4600 to 4800 August shorn Merino ewes at the end of November for a six-week joining. Three generations of the Dewar and Morgan families - Isabella (left), Gavin, Lachlan and Craig Dewar, Woodyarrup stud, Broomehill and Ed, Sean and Corey Morgan, Morgan Bros, Cranbrook. The Morgans were the volume buyers at the Woodyarrup sale where they purchased 23 Merino rams costing from $2100 to $3200.

Greg Doyle said they didn't single mate their nucleus flock of 400 ewes and the two new sires would help form a sire battery of 11 to 12 at a joining rate of around 3pc.

He said they kept their selection process for their sires "pretty basic".

"We aim for a bigger sheep with stretch, height and size with a good quality wool and try to match the two out," Mr Doyle said.

Mr Doyle said they sold an annual draft of 614 1.5-year-old ewes in two lines which averaged $190 at about 400c/kg at the Elders Corrigin sheep sale earlier the same day as the Woodyarrup sale.

Canowie Fields stud classer Philip Russell said the whiteness in the ram's fleece was important given it's going to the coastal regions while it was also a very correct sheep.

The next highest price of $7000 was paid on two occasions.

It wasn't until lot 91 that the Marsh family, Warrens Creek stud, Kojonup, paid their $7000 price in later shorn paddock run rams for one of two rams purchased at the sale.

Greg Marsh, who attended the sale with his son Anthony and grandson Mitchell, said while the family had been regularly buying stud sires at Woodyarrup for the past 20 years, he recently came across some old ram sale catalogues which showed his grandfather had purchased rams from Woodyarrup during the 1920s at the Katanning ram sale.

"During the late 1990s, we learned of what Dr Paul Swan offered and when he got involved at Woodyarrup we became interested," Mr Marsh said.

"We had a good sound breeding base but the Woodyarrup sire put a knife through them with its impact, the micron came down, staple length and fleece weight went up.

"An amazing result of what one ram can do and then you have a generation in place to build from."

But it was the swag of volume buyers that put together large teams of rams which swung the most influence on the sale.

Leading the charge was 10-year client Morgan Brothers, Cranbrook, who built a team of 23 Merino rams at solid values from $2100 to $3200.

Ed, Sean and Corey Morgan represented three generations of the family at the sale and will join 4500 ewes to Merino rams in February.

The Morgans said they were originally Brickhouse clients and moved with the stud to its new home at Woodyarrup and have carried on from there.

"Woodyarrup are a similar sheep and wool type to Brickhouse so it was a smooth transition," they said.

"We look for the more dual purpose types and we can see this coming through our young stock with their size.

"Our February shorn wool clip averages 18.4 micron and we are still cutting a reasonable amount of wool."

Carslake Holdings, Beverley, was another of the sale's bigger players after finishing the sale with a team of 20 mainly Merino rams, costing from $1100 to $2700.

Russell McKay, Elders stud stock, was kept busy throughout the sale, filling several client orders including 15 Merino rams for Myoting Plains, Quairading, operating at all values from $800 through to a $3500 top price paid for a powerful final ram to conclude the sale, 13 predominantly Poll rams costing from $800 to $2750 for an undisclosed Great Southern account and nine rams for Dale Park Enterprises, Beverley, paying from $1200 to $1700.

Mr Russell said he had more than 20 clients buying rams at the sale who were all very keen on the figures, wool quality and yearling growth rates of the Woodyarrup rams.

An undisclosed buyer from the Williams area operated from $1800 to $3900 for a team of 14 Merino rams, while regular buyers the Patmore family, Springhill Farm, Narrogin, paid from $2000 to $3100 for nine Merino rams and three Poll rams for a healthy average of $2613 and Frost and Cave Farms, Kendenup, focussed exclusively on Polls in their team of 11 rams costing from $800 to $2000.