Young Gun Lachlan Hansen on the board at a Rylington Park shearing school last month.

"I'm loving it - going to different towns, different sheds, it's what I want to do."

GOOD shearers make shearing seem a smooth, unhurried, relatively easy exercise for themselves and - though obviously less comfortable sitting up on it haunches - for the sheep.

Trainee shearer Lachlan Hansen, 21, of Bunbury, does not yet make it look as easy as some of his more experienced peers, but his boss Aaron Piper, Dinninup Shearing Services, has no doubt that will come.

So too will the speed to shear 200 or more a day come with experience.

"He has a good hand and he's very keen - he'll get on," Mr Piper said last week when Farm Weekly called in at a shearing shed near Boyup Brook where Lachlan, his father Nicholas Riley and his brother, also Nicholas, 19, were working.

Another brother Liam, 18, also works for Dinninup Shearing Services as a rouseabout and presser like Nick junior.

Mr Hansen comes from a line of shearers stretching back to his great grandfather, then his grandfather.

His father started shearing at age 15 and has been in the industry for 27 years, the past 12 on and off with Dinninup Shearing Services, so Mr Piper has known Mr Hansen for that period, watching him grow from a boy into a solid young man who has eventually settled on what he wants to do with his life.

Growing up in Katanning with his father a shearer, it was always odds-on that Mr Hansen would at some time be involved in the shearing industry.

As a boy he followed his dad around the shearing sheds.

"I used to go with him everywhere, into the sheds, all over, everywhere he went, I went," he recalled.

So he was introduced to the smell of lanolin, the buzz of handpieces, the universal blaring radio during runs, the hard work, the camaraderie and the routine of shearing sheds and a shearer's life at a young age.

When he was old enough to handle a paddle to scrape up whisps of wool without getting in the shearers' way and then to pick up and toss a five kilogram fleece on the wool table, he began working as a rouseabout in sheds during school holidays to earn some serious pocket money. 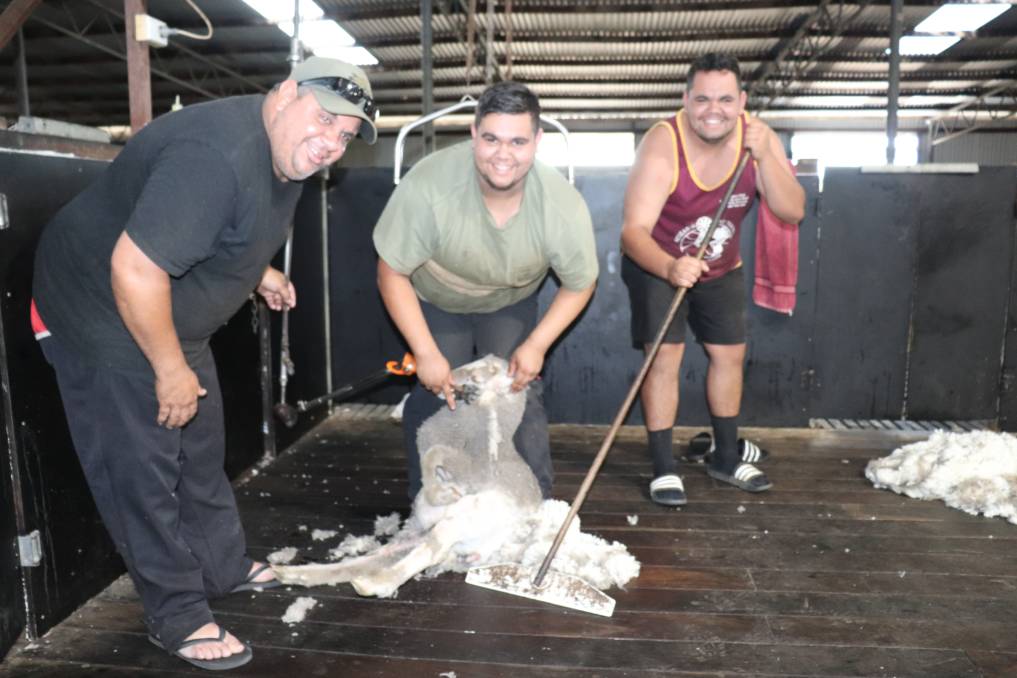 He moved to Bunbury and completed year 12 at Bunbury Secondary College.

Jobs at Bunbury port with Qube Ports & Bulk and with the City of Bunbury followed, but neither felt like a career in the making.

Then Mr Piper stepped in and offered him a job in a sideline business, a skins shed which processes sheep and lamb pelts from the V&V Walsh abattoir at Davenport on the outskirts of Bunbury.

According to Mr Piper, taking wool off pelts in the skin store is a good way for young people who might eventually become shearers to learn how to use a handpiece and get a feel for it in a work environment where there is less likelihood of them accidentally injuring themselves or a valuable animal than on the board in a shearing shed.

Mr Hansen said he worked in the skin shed for about a year, but the shearing shed was calling louder.

He joined Dinninup Shearing Services as a rouseabout and presser, then joined his father on a crutching team which brother Nick also joined.

"The crutching team with Lachlan, his father and brother have probably handled 100,000 sheep," Mr Piper said.

Crutching is a dirty but necessary job which Lachlan accepts as a part of a wider vocation.

"I don't mind it just to get my coin up (and) I like the cradle, it makes the job easier," he said.

At the start of this year Mr Piper suggested Mr Hansen attend one of the Australian Wool Innovation-funded shearing schools run at Rylington Park, Mayanup, to learn the finer points if he wanted to move up to shearing.

Many of the Great Southern shearing contractors support the schools and either send their learner shearers there or select them from Rylington Park graduates.

"I'd been thinking about becoming a shearer for about a year so I did the first school they held this year and I really enjoyed it and learned a lot," Mr Hansen said.

Then the COVID-19 pandemic struck and, through the emergency measures introduced to stop its spread, opened up more opportunity for young shearers to join teams where stands would normally be occupied by shearers from New Zealand or the Eastern States, who this year were unable to enter WA.

Gaining a stand with Dinninup Shearing Services about two months ago was an obvious source of pride for this young gun.

He attended a second shearing school at Rylington Park last month to further improve his technique and having his own stand on a shearing team placed him one out among the other learner shearers who were working as rouseabouts or wool pressers.

"I came back again to learn a bit more, to improve my footwork (good balance and weight distribution are important aspects of shearing that make the job easier and reduce the risk of back injury) - just composure really and to make it a bit easier to find my blows," Mr Hansen said.

"I'm loving it - going to different towns, different sheds, it's what I want to do.

"I wouldn't come this far unless I loved it," he said.

For Mr Hansen COVID-19 opened up an opportunity.

He has recognised that, grasped it and plans to make the most of it as his chosen career, while proudly continuing a family tradition.