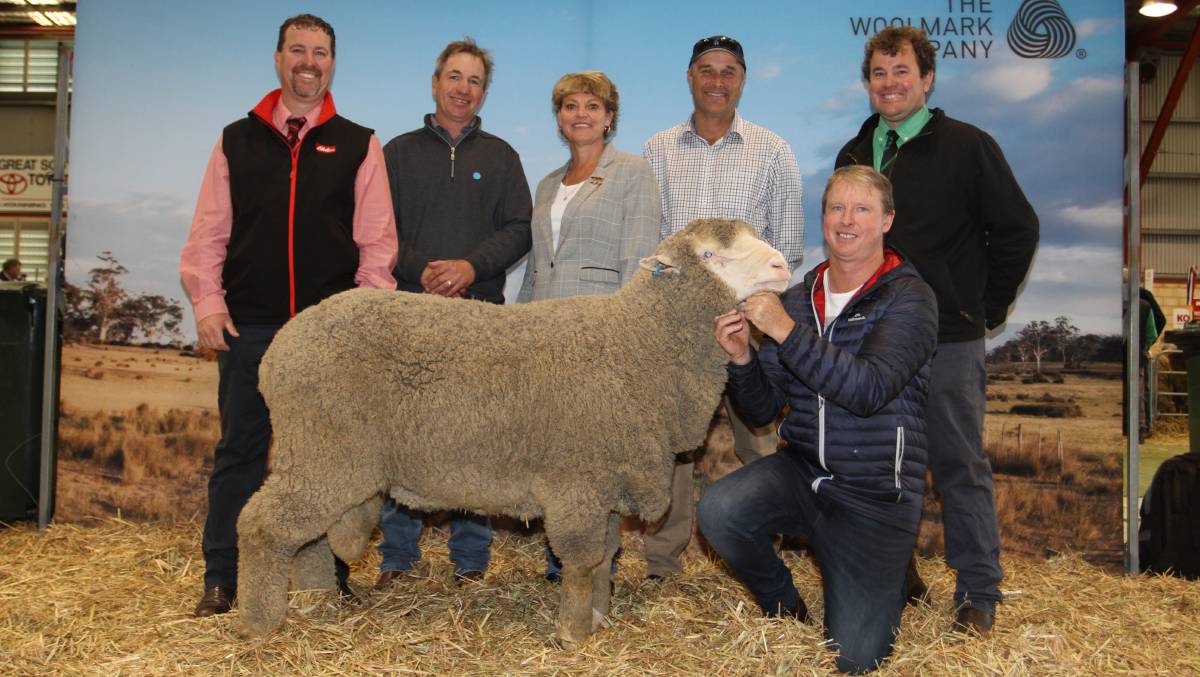 The season average across all breeds this year finished at $1474.

A DRY season affecting water and feed supplies across a large percentage of the State, huge numbers of breeding ewes leaving Western Australia and a global pandemic which played havoc with markets, in particular the wool market in the past eight months, no doubt had an impact on this year's ram selling season.

Despite these struggles wool and livestock producers have faced over the past 12 months they still showed they had faith in both industries when attending ram sales in 2020.

Even though there is still plenty of optimism among producers due to future outlooks, buyers at sales weren't as strong in their bidding as the past two seasons in terms of what they were prepared to pay and the numbers they wanted to buy, which resulted in the number of rams sold and the average being back.

The season average across all breeds this year finished at $1474, ranking it as the third best on record.

A lack of rain across most of the State over winter, on the back of average winter rains the previous two years, meant producers were worried about water and feed supplies when attending ram sales this year.

This year's dry start, combined with the previous two dry years, also forced many producers to reduce breeding numbers this year and this offload of ewes hasn't stayed local.

According to DPIRD figures from January until October this year, 1.5 million sheep and lambs have been transferred east from WA, of which 54 per cent were lambs and 46 per cent adult sheep.

Assuming that the adult sheep were mostly breeding ewes, that means close to 690,000 head are no longer grazing paddocks in WA and will not be joined to WA rams this year. 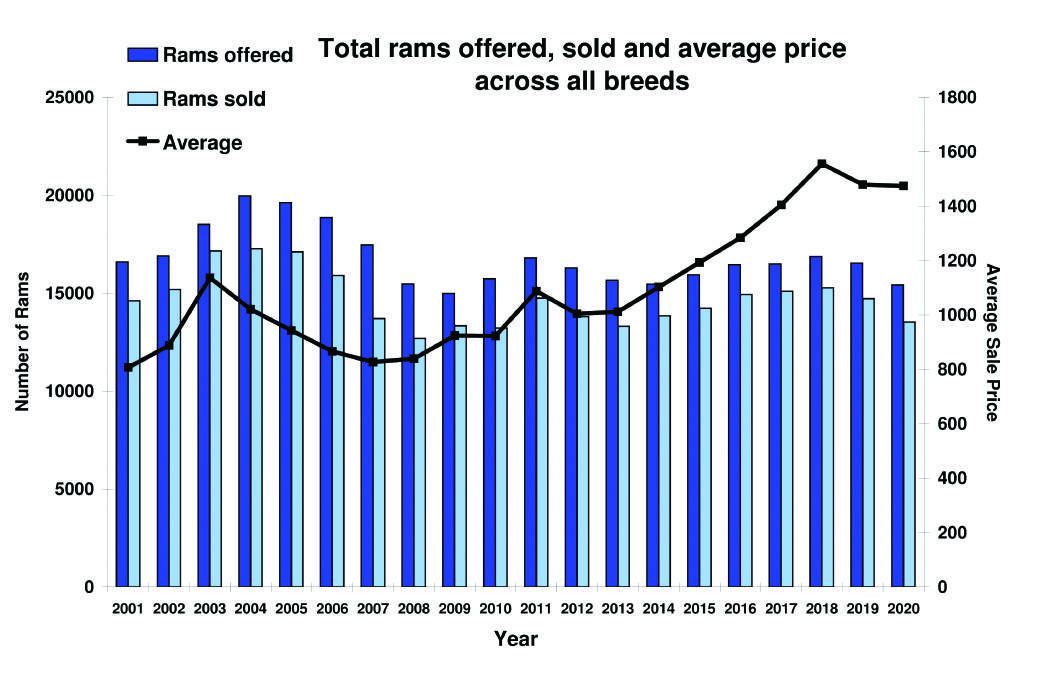 As a consequence, there was always going to be less rams sold in WA this year as a result of producers not requiring the same numbers as years gone by.

Even though the season has again been disappointing for most and ewe numbers across the State were down when ram sales commenced, growers still had plenty of reasons to be positive in their bidding, given sheep and lamb prices have been extremely strong over the past 12 months and this was the case when it came to meat sheep sales, in particular.

As the wool price has fallen away over the past 18 months from record highs, sheep and meat prices have driven producer confidence to keep breeding.

Sheep and lamb prices were again strong during the past 12 months with producers regularly seeing prices surpass $200.

Lamb prices peaked in late February and early March and as a result producers regularly saw prices of more than $200 a head for heavyweight lambs.

At the start of the selling season prices were strong and sitting at similar levels to 2019 in WA saleyards.

Mutton has also been strong over the past 12 months and as result the national mutton indicator outperformed all lamb categories in 2019, increasing 17pc over the course of the year to average 518c/kg CWT.

In WA, mutton peaked in the saleyards at 700c/kg CWT in mid to late-March and producers regularly saw returns of more than $180 a head with some lines earning upwards of $200.

Since then the mutton market has come off slightly and in MLA's sheep and lamb indicator report (for the week ending August 25), mutton (18-24kg CWT) was reported at 484c/kg CWT, up on last year's figure at the same time of 427c/kg CWT, while in the same report last week (week ending November 3) it reported mutton at 485c/kg CWT which is up 54c/kg on the same time last year.

Like trade sheep prices, prices at this year's spring ewe sales have also remained strong as a result of strong demand from Eastern States' buyers looking to restock following the break of the drought.

Following on from the strong values of the past two years, ewe prices this year continued to strengthen with prices peaking at $258 in the Nutrien Livestock Merredin, Corrigin and Wickepin ewe sale.

But this wasn't the only sale where ewes sold for more than $220 - all the sales saw top prices of more than $230 and the ewe offerings so far this season have averaged more than $180, with most pushing beyond the $200 barrier.

Throughout the autumn period many producers took the opportunity to capitalise on the strong Eastern States' demand and offloaded young sheep when feed and water supplies were tight through sales on AuctionsPlus.

This included one line of Wheatbelt ewe lambs selling to $321 to set a State record price for commercial ewe lambs.

While sheep and lambs prices have been strong, the same can't be said about the wool market.

It dropped away to its lowest levels since 2012 in the first wool sale in September (week beginning Monday, August 31) when ram sales kicked off in earnest.

COVID-19 has certainly played a significant role in the market falling away over the year but there have been some positive signs for the market in recent weeks with it recovering some of the losses.

So with a number of factors playing on producers minds from tight water and feed supplies and reduced ewe numbers, to low wool prices but good sheep and lamb prices, producers had plenty to think about leading into this year's ram selling season.

And when you look at the final ram sale figures there is no doubt these factors had an impact on their buying decisions from what they were willing to pay, to how many rams they wanted and what type of rams they purchased.

Compared to 2000 when Farm Weekly started recording sale results for all breeds, the average was again more than double, up $777 on that year's average of $697, while in terms of gross revenue, this year ranks as the fourth largest since 2000 and the first time in four years the figure hasn't surpassed the $20 million mark.

The $33,000 season top price was paid for a March shorn, two-tooth Poll Merino ram from the Gooding and Robinson families' East Mundalla stud, Tarin Rock, at the WA Sheep Expo & Ram Sale at Katanning in August.

As well as an increase in the number of rams offered and sold, these breeds also recorded a significant rise in average of $632.

When it came to the biggest lift in average this year, that title went to the White Dorper and Dorper breeds with a rise of $769.

In the average stakes the shedding breeds (UltraWhite, SheepMaster, Kojak, Australian White and Western Whites) performed the strongest achieving an average of $2977, with SheepMasters the best performing with an average of $4752.

In terms of market share the Merinos again held more than 60pc of the market and this year its share for rams sold was 60pc, back 1pc.

The British and Australasian breeds market share for rams sold was the same as 2019, finishing at 28pc.

When the British and Australasian breeds market share is broken down for rams sold White Suffolks and Poll Dorsets sit at 15pc and 9pc, making them the next biggest breeds sold behind Merinos.

The Dohne and Prime SAMM breeds recorded a market share of 5pc and 2pc respectively on the number of rams sold, the same as last year, while the market share for the shedding breeds on rams sold finished at 3pc.

The Merino, White Suffolk, Poll Dorset breeds were the only individual breeds to surpass the $1m gross figure this season, while the shedding breeds combined surpassed it for the first time.

Merinos again clearly topped the gross figures for the season with their sales grossing more than $12.55 million.