"We really appreciate Elders' ongoing support of our association & our functions. Colin Cosh (left), travelled from Manjimup and caught up with Margaret and Neville Kinnane, Winthrop and Ken Pears, Albany. 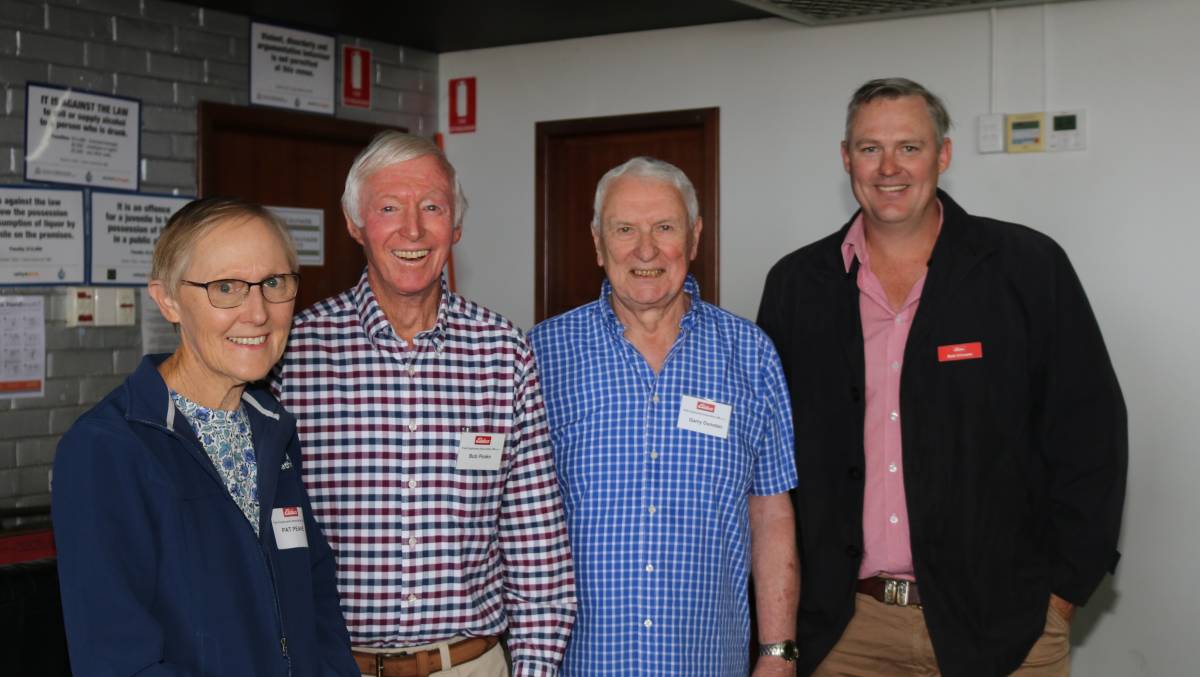 THE Elders Past Employees' Association (EPEA) held its second annual get-together at the Stirling Club, Albany, recently and with partners invited for the first time, there were almost 30 people in attendance.

Incoming chairman Garry Dunstan welcomed all and said it was nice to acknowledge partners, who had put up with quite a lot during their Elders days.

"Some of the houses we lived in probably should have been demolished and, as staff members, we were expected to take phone calls at all times of the day and night," Mr Dunstan said.

"It's great to have people here who have travelled from Esperance, Denmark, Perth and Manjimup, as well as locally and there is always plenty of story swapping and plenty of noise when we get together.

"Thanks to Simon Massina and Bob Peake for organising today's event and a special welcome to Elders area manager south Matt Ericsson.

"We really appreciate Elders' ongoing support of our association and our functions.

Mr Ericsson gave a company update, saying Elders had finished its financial year (September 30) on a strong note and had started the new financial year well, being 70 per cent up on October trading compared to last year.

"We have seen considerable growth in livestock and real estate sales and the acquisition of Sydney-based ag chemicals company Titan Ag and group buying power through AIRR has made us more competitive in this space," Mr Ericsson said.

"Rod Scrutton told me today he remembers sheep selling for 10 cents a head in the 1970s at Wyalkatchem, well today that is more likely upwards of $200 a head.

"Our focus on culture and people remains as strong today as ever and we still look to employ only people that are the right fit.

"As an example in this region we are seeing the success of good people with our Cranbrook branch in contention for Elders national branch of the year in 2020.

"Elders is now a top 200 company on the ASX with a market capitalisation of $2 billion, whereas 10-years-ago it was $50 million and our managing director Mark Allison has a clear focus through our strategic eight point plan for us to work towards becoming a top 100 company in the near future," Mr Ericsson said.

The EPEA's next event will be its Christmas luncheon at Rossmoyne Bowling Club on Monday, December 7.

Membership of the group is $20 which includes regular newsletters.

If you are a past employee of Elders and are keen to join then contact Bob Peake on 0428 103 650 or email rwpeake@westnet.com.au