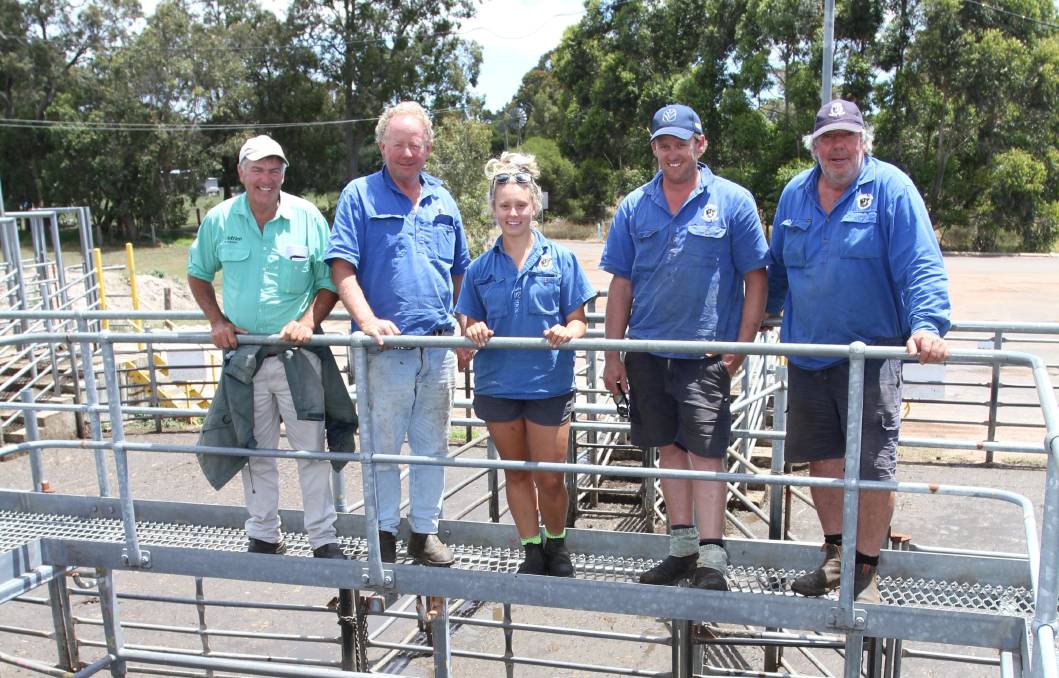 Strong local grazier and lotfeeding support battled it out to buy

The sale was the second standalone weaner sale for the season with the Nutrien Livestock and Elders South West selling teams yarding a combined total of 1060 steer and heifer weaners, along with a few yearling lines, weaned for a minimum of 10 days.

While the absence of a major South Australian order naturally saw some suited weaner descriptions slightly softer than the record breaking first sale the week prior, the market still remained extremely buoyant for feeder and backgrounding cattle to see values generally very firm.

Strong local grazier and lotfeeding support battled it out with a major Eastern States' lotfeeder and export order and at the completion of selling, auctioneers Chris Waddingham, Nutrien Livestock, Capel and Alec Williams, Elders, Margaret River, had recorded a combined gross of $1,467,122 at an overall average of $1384. 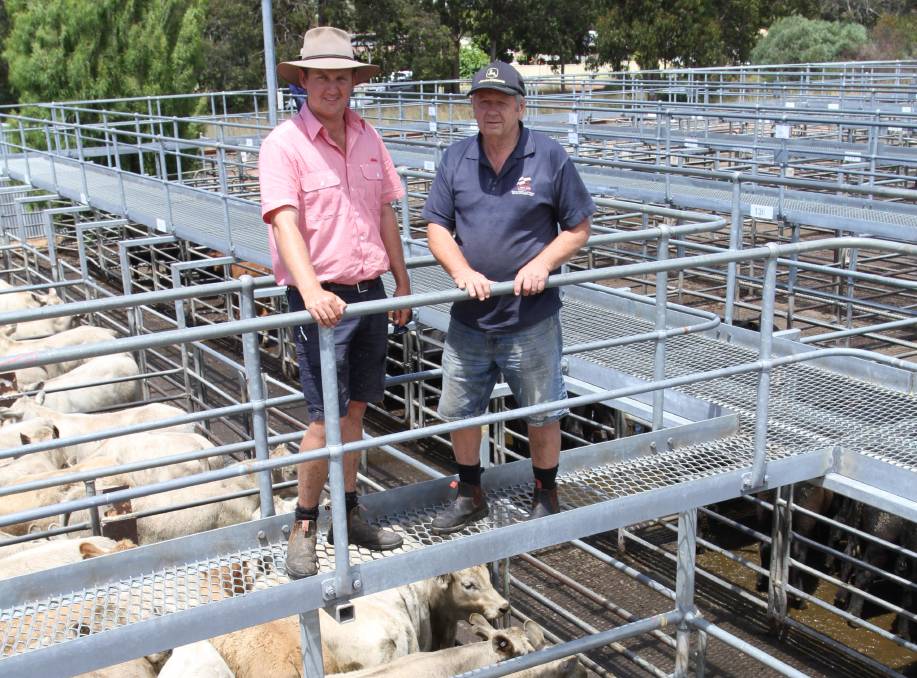 The smaller yarding from the previous sale was up $5 on overall average compared to $1379 from the 1325 steers and heifers sold at the first sale.

The sale was again interfaced on AuctionsPlus and with 558 catalogue views yielding 23 registered bidders logged in from New South Wales, Victoria, Queensland and WA, no cattle were sold to the online platform.

It was Nutrien Livestock's turn to kick the sale off with a yarding of 643 head with a couple of pens of yearling steers weighing more than 400kg in the front row recording the company's top prices.

Per head values topped at $1739 for a duo of Angus yearling steers weighing 470kg offered by AN Caldwell with Melrose Enterprises paying 370c/kg.

Graeme Browne, armed with a couple of significant orders for a lotfeeder at Burra, South Australia and an exporter, was the sale's most influential buyer of steers and heifers.

Mr Browne secured a further four pens of weaner steers at the top end of the market for this account including the next highest price of $1641 for eight Angus steers weighing 391kg offered by Dehuggus Services Pty Ltd at 420c/kg.

His export account secured five pens of steers from this section of the sale, paying a top price of $1527 for a couple of Angus steers weighing 373kg from LR Payne knocked down for 410c/kg.

John Gallop secured five pens of steers for a southern lotfeeding order, paying a $1528 top price at 432c/kg for 12 Angus steers weighing 354kg from the paddocks of Kau & Son.

The sale's 486c/kg top liveweight price honours went to Arley Farm for a line of 14 Angus steers weighing 260kg which were purchased by Rob Gibbings, Elders, Capel, to cost $1262.

Nutrien Livestock, Waroona agent Richard Pollock collected 11 pens of steers for a grazier account including a run of nine consecutive pens where he paid the 484c/kg top price for three of these pens.

Another line of steers to return more than 480c/kg were 11 Murray Grey steers averaging 261kg from the Arley Farm draft which were purchased by Cameron Harris, Elders, Manjimup, for 482c/kg and $1260.

The Armstrong's yearlings featured again in the heifer top prices with 13 Murray Grey calves averaging 392kg, knocked down to Mr Gallop for a northern lotfeeder account for the sale's $1506 top price at 384c/kg.

Mr Browne was the dominant buyer in the heifer line-up, collecting 10 of the 17 pens of heifers in Nutrien Livestock's run for his two main orders.

Included in the haul was the next highest price of $1376 for eight Simmental cross heifers averaging 372kg from MI Vuletic at 370c/kg and the section's 414c/kg top liveweight price for 14 Angus heifers averaging 297kg offered by RL & WG Wych to cost $1230.

The sale swung to the 417 steers and heifers yarded by the Elders team which opened with a quality run of Angus yearling steers offered by Ecobrook Trust.

The opening pen of 11 heaviest steers averaging 457kg topped the overall sale at $1911 when they sold to Mr Browne, bound for South Australia and costing 418c/kg.

Mr Gallop, for his northern lotfeeding order, secured the next two pens of Ecobrook Trust steers, paying to 426c/kg and $1910 for 12 steers averaging 448kg.

The first pen of 2020-drop Angus weaner steers weighing 381kg offered by regular vendor Callanish Grazing, Thompsons Brook, topped these values when they sold to Mr Browne for South Australia at $1624 and 426c/kg.

Callanish Grazing's draft of Charolais cross steers also featured at the top-end of the market, with 21 steers averaging 367kg purchased by Mr Gallop at $1584 and 432c/kg and also paid $1543 at 430c/kg for four SimAngus steers weighing 359kg from Toevlucht Farming, both for the southern lotfeeder account.

Another couple of Toevlucht SimAngus steers weighing 285kg were snapped up by Ralph Mosca, Nutrien Livestock, Harvey, for 482c/kg and $1374.

Some outstanding drafts of heifers rounded out the sale.

Mr Browne continued his buying dominance, securing 11 of the 17 pens of heifers for both accounts.

Another quality draft of Charolais heifers were offered by PJ & BJ Tognolini, Dardanup, with a pen of 13 weighing 316kg heading to the paddocks of Harris Beef for the sale's equal top liveweight price of 428c/kg to cost $1353.

Harris Beef also paid the next highest price of $1390 at 424c/kg for a top line of 11 Angus cross heifers averaging 328kg, offered by HH Clifton.