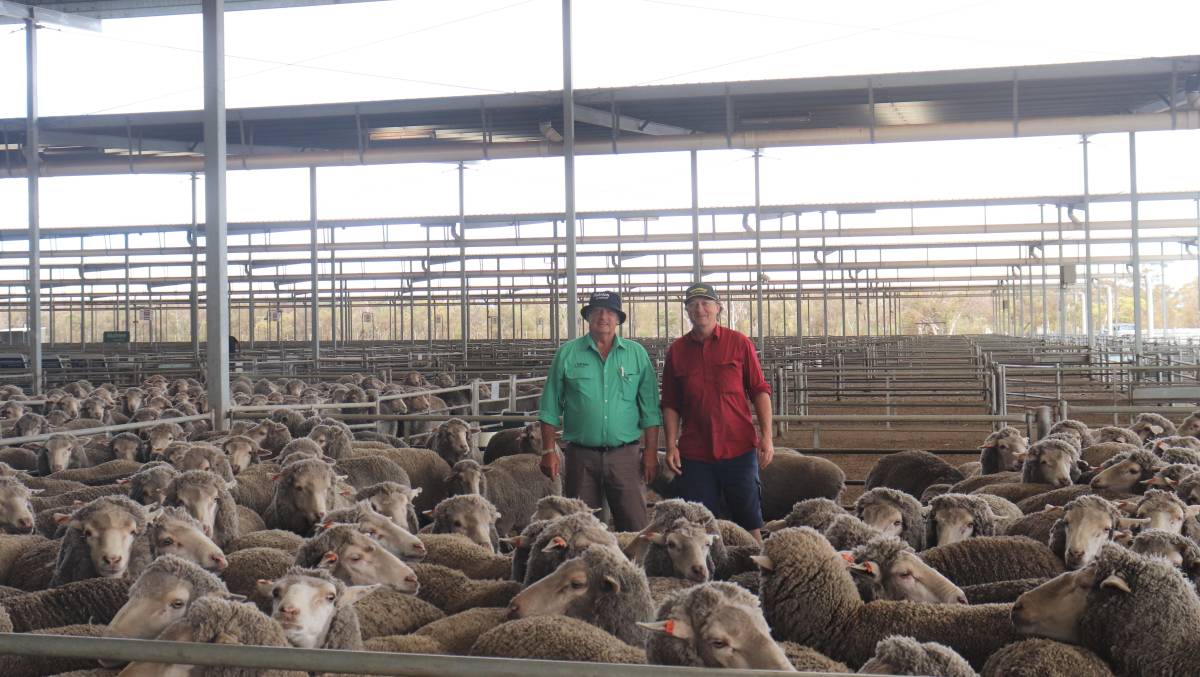 ENTHUSIASTIC buyers flooded into the saleyards for the Nutrien Livestock Special Sheep sale at Katanning on Friday of last week where prices hit a high of $230 twice.

The majority of the yarding was made up of 5.5-year-old ewes with 2870 penned and the remainder of the offering included 1.5-4.5yo ewes, wether lambs and ewe lambs. The sale was aided by the genuine flock dispersals of WG Mills & Co and GR Fewson.

Mr Battersby said he was extremely happy with the result and said the price was better than he had expected.

"I am very happy with how it went," Mr Battersby said.

"The reason I am selling in this sale is because of the drier seasonal conditions, we are lacking water for the sheep."

Ms Bushby equalled the top-price of the sale bidding $230 for a line of 206 February shorn, Keetlen Valley blood, 4.5yo ewes. The first lot of the sale made $200 and was paid for a line of 651 August shorn, Cranmore Park blood, 1.5yo ewes from AJ Staniforth-Smith and was paid by NR & LP Wilson, Mt Barker.

Gilbert Wines, Kendenup, also paid $200 for a line from RP & IF Norrish, consisting of 83 September shorn, Angenup blood, 1.5yo ewes.

Nutrien Livestock Breeding representative Roy Addis was in charge of watching the AuctionsPlus bids and the interface on the online platform certainly helped drive up the prices.

Combined the lines that sold through AuctionsPlus grossed $883,089 and averaged $204 a head.

There were three buyers from New South Wales, two from Victoria, two from South Australian and one Western Australia buyer bidding via AuctionsPlus, and between they purchased 14 out of 39 lots offered through the platform. The second top price line of the sale which made $227 was paid by a NSW buyer operating via AuctionsPlus, securing a line of 348 September shorn, Mallibee blood, 4.5yo ewes offered by SN & EN Lawrence.

The third best price of $225 was reached twice and was paid by a Victorian buyer and a NSW buyer on AuctionsPlus.

The first line to hit the $225 mark were 499 September shorn, Wiringa Park blood, 3.5yo ewes from WG Mills & Co and they are heading to NSW.

It was immediately paid again for a line of 454 November shorn, Wallinar blood, 3.5yo ewes from GR Fewson, with these ewes now destined for paddocks in Victoria.

Also headed to South Australia at $199 were 313 October shorn, Wiringa Park blood, 3.5yo ewes from Southshear Trading and a line of 312 November shorn, Wallinar blood, 4.5yo ewes from GR Fewson at $197.

A WA buyer purchased one line on AuctionsPlus, paying $220 for a line of 160 February shorn, Golden Hill blood, 3.5yo ewes, while a line consisting of 442 September shorn, Wiringa Park blood, 4.5yo ewes offered by WG Mills & Co sold at $210 to a NSW buyer.

Headed to Victoria via AuctionsPlus at $203 were 85 October shorn, Bullock Hills/ MPM blood, 1.5yo ewes from Bullock Hills Pastoral.

The top price paid by Kolonga Downs Trading Co was $190 for a line of 376 October shorn, Willemenup/Westray blood, 1.5yo ewes from Eticup Grazing Co.

Also paying $190 was a Victorian purchaser on AuctionsPlus for a line including 178 November shorn, Wiringa Park blood, 3.5-4.5yo ewes offered by WP Dolan & Co.

The only line of Dohnes sold to Fletchers International at $180 paid for 438 March shorn, Chirniminup blood, 5.5yo ewes from MJ & DJ Smith.