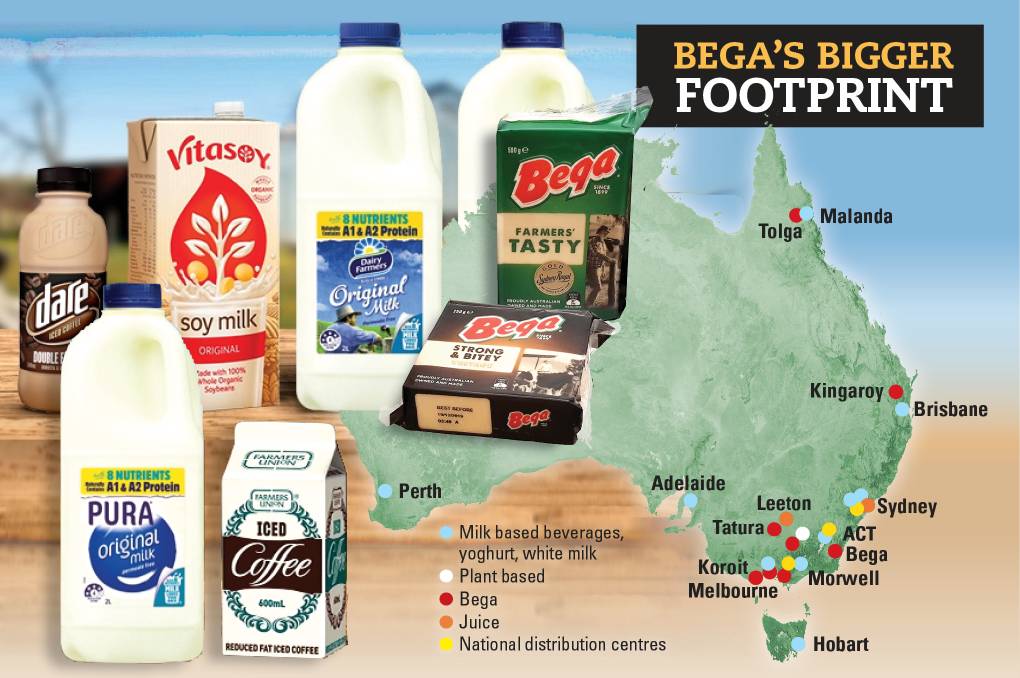 When Bega Cheese' takeover of Lion Dairy and Drinks is completed early next year its milk processing business will grow from four to 15 dairy factories, plus two juice plants, and joint venture ownership of one of Australia's big name plant "milk" facilities.

Lion has dairy plants in North Queensland and Brisbane, Perth, Adelaide, Hobart, Melbourne and Morwell in Victoria, and Penrith and Wetherill Park in outer Sydney.

It is also the majority partner in a joint venture with Bega - Canberra's Capitol Chilled Foods - and has a half share with Hong Kong partner Vitasoy International in the Vitasoy plant-based beverage facility in Wodonga on the NSW-Victorian border.

On the fruit juice front, Lion owns the Berri, Daily Juice and Juice Brothers brands, processed at Leeton in southern NSW and Smithfield in Sydney where Zooper Dooper freezable flavoured ice blocks are also made.

It has five dairy factories based on its original home turf on the NSW South Coast and in Victoria at Tatura, Strathmerton and Koroit, plus its Port Melbourne spreads and sauces plant.

The Peanut Company of Australia division, bought in 2017-18 to supply its peanut butter needs, has processing operations in southern Queensland at Kingaroy and Tolga on the Atherton Tableland.

Branded product sales represented only about 20 per cent of Bega's total business until it bought Kraft Foods' brands from Mondelez Australia for $460m in 2017.

Much of its southern NSW and Victorian dairy business had been based on bulk dairy product sales or toll processing.

Now, on the back of its Mondelez and Lion acquisitions, Bega expects branded products to represent 70pc of sales within three years.

Lion also has an alliance with big French dairy co-operative group Sodima which entitles the local dairy group to produce and sell its famous Yoplait yoghurt brand in Australia and South East Asia.

However, exports of milk, cream, yoghurt and dessert products overseas sales have not blossomed as Lion had expected under the ownership of Japanese food and brewing giant Kirin Holdings.

"Lion's international business is much smaller than Bega's $500 million export sales, so that opens up the potential to piggyback some of those products into our established channels," said Bega Cheese executive chairman, Barry Irvin.

"But it's not necessarily as simple as it sounds.

"Fresh dairy products like yoghurt are harder to build into large volume footprints than bulk products like cheddar or nutritional powders.

"There may be some good export growth opportunities we can open up over time, but we will have to see what works best.

"We certainly have not predicated this deal on the prospect of increasing our export results overnight."

DFMC, which supplies about 200m litres of milk annually from 250 farms, applauded the iconic Dairy Farmers name coming back in Australian ownership.

"We're very pleased Bega has bought Lion Dairy and Drinks and the Dairy Farmers brand, which was established by our predecessor co-op," said chairman and Queensland dairy farmer, Andrew Burnett at Gympie.

The story What has Bega actually bought with its $534m Lion dairy deal? first appeared on Farm Online.