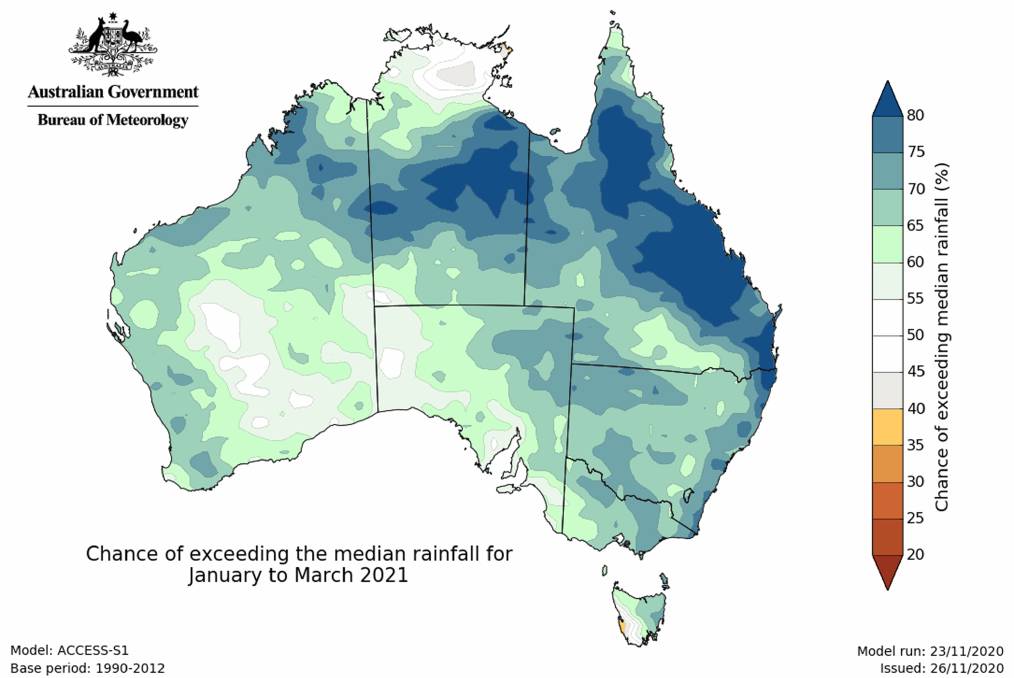 "All being said, this outlook is more promising than an outlook that says below average, so let's take the glass half-full approach on this one."

WHILE harvest in Western Australia isn't even close to being finished, the Bureau of Meteorology (BoM) is already looking to 2021 and is predicting the State has at least a 55 per cent chance of getting above average summer rainfall, from January to March.

During that period, the odds of WA getting above average rainfall exceed the odds of below average, with the extra rain being driven by the affects of La Nina.

While WA often doesn't get the impacts that the Eastern States tend to get, this time around it looks like La Nina will affect WA as well.

BoM spokesman Neil Bennett said when looking at the January to March period, it was important to remember that the actual averages were not that high anyway. 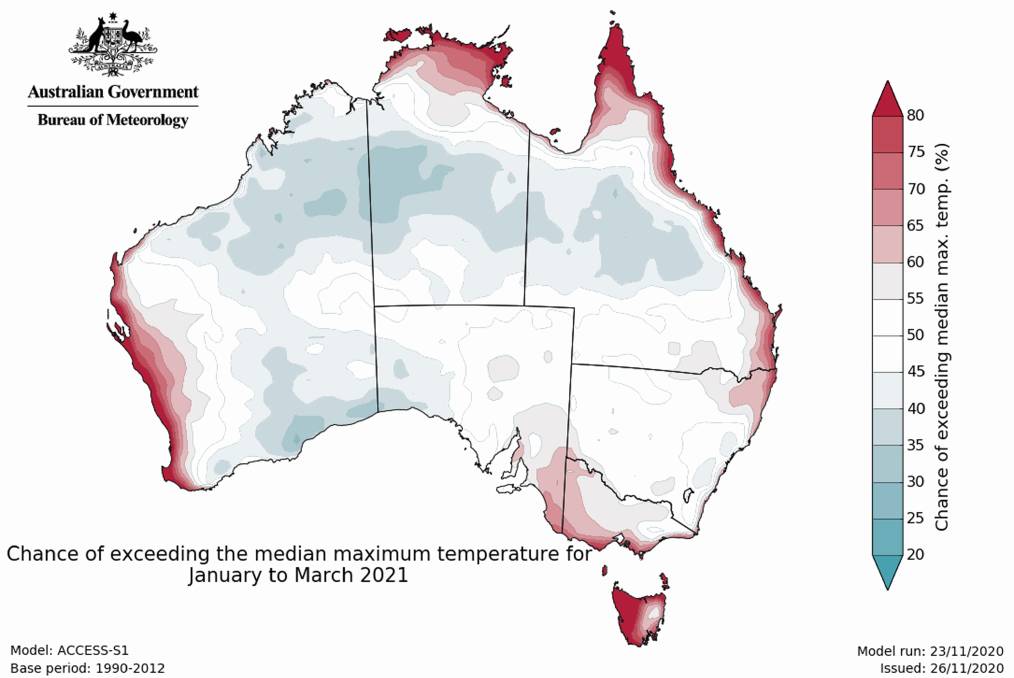 "When you look at how much growers might be able to get, the chances of that being 100 millimetres or more is quite small, but if you're looking at the odds of 50mm, you start to move above the 50pc mark," Mr Bennett said.

"There is a reasonable chance that some places could see at least 50mm in that three-month period, which obviously helps them with subsoil moisture.

"In some parts there is up around the 65 to 70pc chance, the far South West doesn't look as encouraging, but even there we're looking at 55 to 60pc chance."

How much that rainfall helps the subsoil is really going to depend on what a farmer's moisture looks like right now - from farm system to farm system, just how deficient they are in their subsoil currently.

"Obviously if they have one large system moving over them, that will have a huge impact," Mr Bennett said.

"The November rainfall that we've seen, while not welcome for cropping and harvest, has helped a little bit because it's put something in the system."

All bets are off if the remnants of a tropical system move down from the North West.

One of the things with La Nina is that there will be greater rainfall in the north which will come through from tropical systems, including tropical cyclones - if one of those sweeps south there will be a lot of rain in a very short period of time.

However it is far too early and difficult for BoM to predict if that will happen.

Australians should also be preparing for a vastly different bushfire season as the effects of La Nina are felt across the country, according to the Australian Seasonal Bushfire Outlook: December 2020-February 2021.

The Bushfire and Natural Hazards Co-operative Research Centre published its seasonal bushfire outlook last week, finding that grass and crop fires are an area of concern over the summer months.

Federal Minister for Emergency Management David Littleproud said that Australians should remain cautious this summer as these types of fires were fast moving and could spread rapidly when fanned by strong winds.

"These conditions mean that our communities should be continuing to come together to prepare for the risks facing us over the coming summer," Mr Littleproud said.

"While the south east and north west of the country have experienced much needed rain, this has led to grass growth, which will dry out as it gets warmer.

"On the other hand, Western Australia has missed out on this rainfall and conditions are set to be very dry."

Mr Bennett said BoM's climate outlooks showed the chance of above average rain, but there's also the percentage chance of getting at least a certain amount and that's what farmers should be looking at.

"They should focus on the percentage chance of at least 10mm, 15mm, 25mm or 50mm as that is probably more valuable than just saying there's a 60pc chance of above average, because the averages themselves are not that high," Mr Bennett said.

"Looking at Wyalkatchem, for an example, the median rainfall is 36mm but the chance of them getting at least 50mm for December to February is 64pc, but if you go 100mm there's only a 22pc chance."

The other difficulty with summer rainfall is that it can be very hit and miss - the trough systems that form often mean some will get good falls and others will miss out altogether.

"Summer rain is less consistent than winter rainfall and if you get one tropical system you will get the benefit if you're on the right track," Mr Bennett said.

"All being said, this outlook is more promising than an outlook that says below average, so let's take the glass half-full approach on this one."