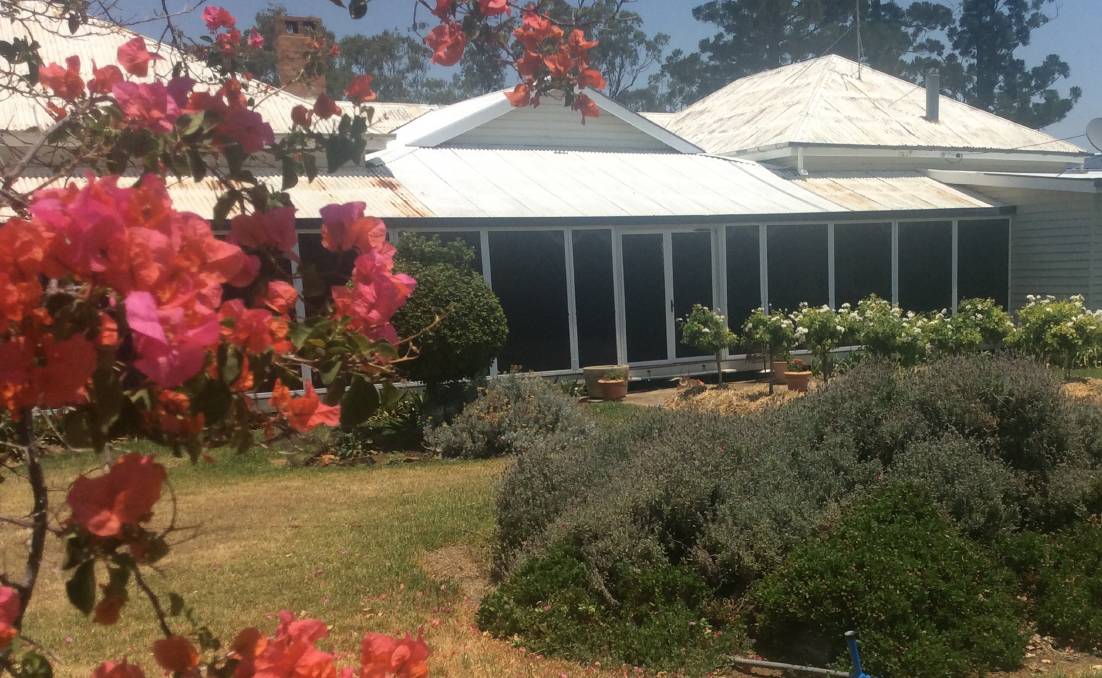 QUEENSLAND HOMESTEAD: The spacious four bedroom homestead features two formal dining rooms and a 9x9m square in the centre of the structure.

The Bice family is giving the expansive homestead on Jolimont, north east of Jandowae, a new lease on life.

WHEN the decision was made more than a century ago to build a homestead on Jolimont Station, the motivation was to create a grand family home, reflecting the status of the grazing industry at the start of the 20th century.

The Hamilton family had been living in a small cottage on the Jinghi Jinghi Valley district property for the previous seven years and aimed to give themselves and future generations plenty of space and all the luxuries of the day.

Constructed of locally-sourced hardwoods and cypress pine with corrugated iron roof and surrounded by gardens, the impressive Jolimont homestead was completed in 1912.

The 'Top House' as it came to be known, features four bedrooms with pressed tin ceilings, two formal dining rooms with back to back fireplaces, an entertainment room, office, an impressive kitchen, and a somewhat curious 'square' in the centre of the building. 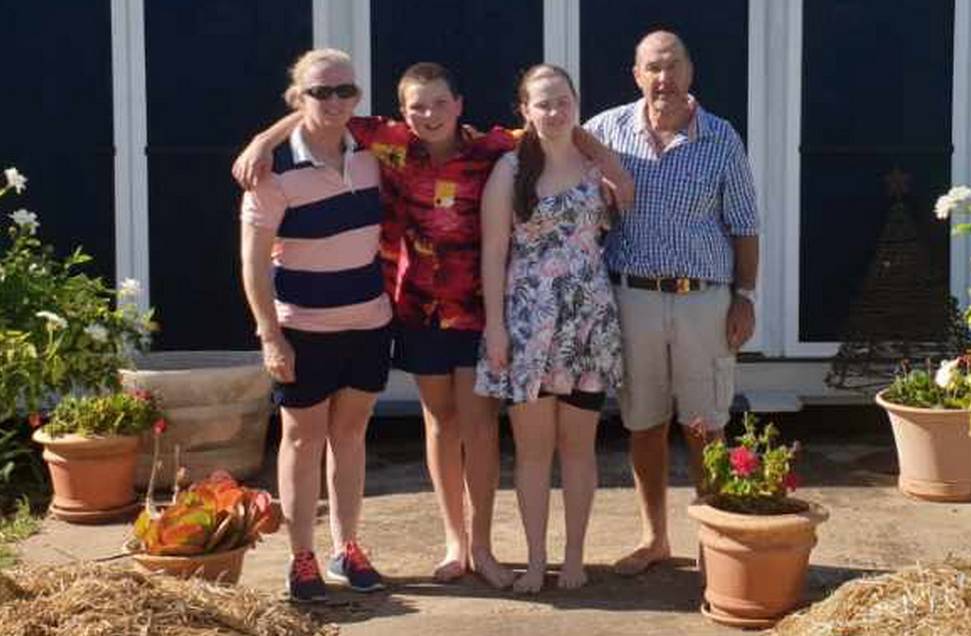 Each of the bedrooms have double doors opening onto the broad timber floored verandahs, which run the length of building, on the front and back of the structure.

Jolimont is now home to Mark and Rachael Bice and their children Isabell and Preston.

The Bices came to the property in 2011 after Mark's business partner and popular local identity John Maunder, was tragically killed in a quad bike accident while mustering cattle.

John is buried in the Jolimont cemetery just down from the cattle yards, along with other members of the extended Hamilton clan.

Located north east of Jandowae - or more specifically in the Jinghi Valley in the Diamondy district - Jolimont sits on a picturesque western spur of the Great Dividing Range.

Under the Bice's stewardship, the grand homestead is in the process of a substantial upgrade.

Already new plumbing has been installed, the electrics upgraded, much of the house has been painted, new screens have been fitted along the sprawling verandahs, and some of the 150 stumps have been replaced.

Jandowae builder Anthony Bowman has taken charge of the carpentry work, including replacing damaged sections of the verandahs. 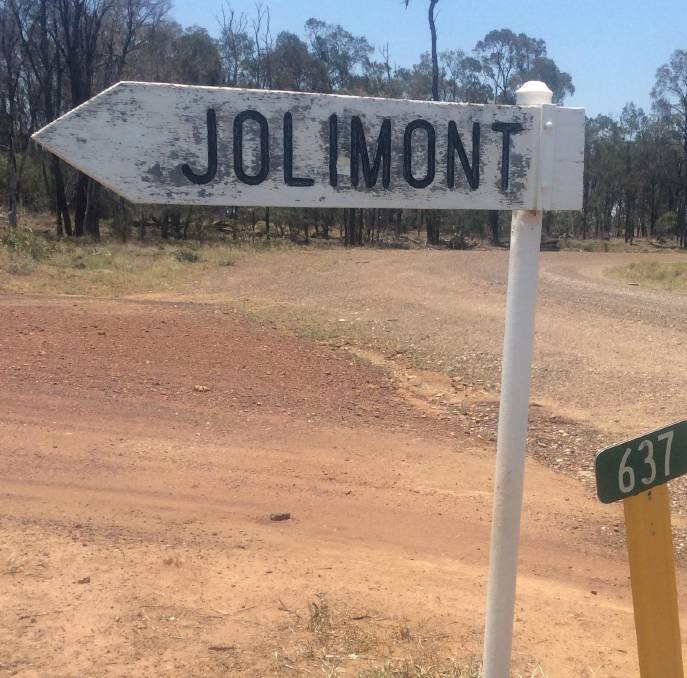 Jolimont sits on a picturesque western spur of the Great Dividing Range.

However, while plenty of progress has been made, there is still plenty to be done, including dealing with big areas of old, decaying wallpaper.

"It's not like modern wallpaper. It's thick, with like a hessian backing, so we're not really sure how to handle it, but we'll certainly get to it.

"One suggestion is we place an appropriate wood paneling straight over the top and leave the wallpaper exactly where it is.

"We're also keen to sort out the ancient, old green lino in the hallway that runs down the middle of the house." 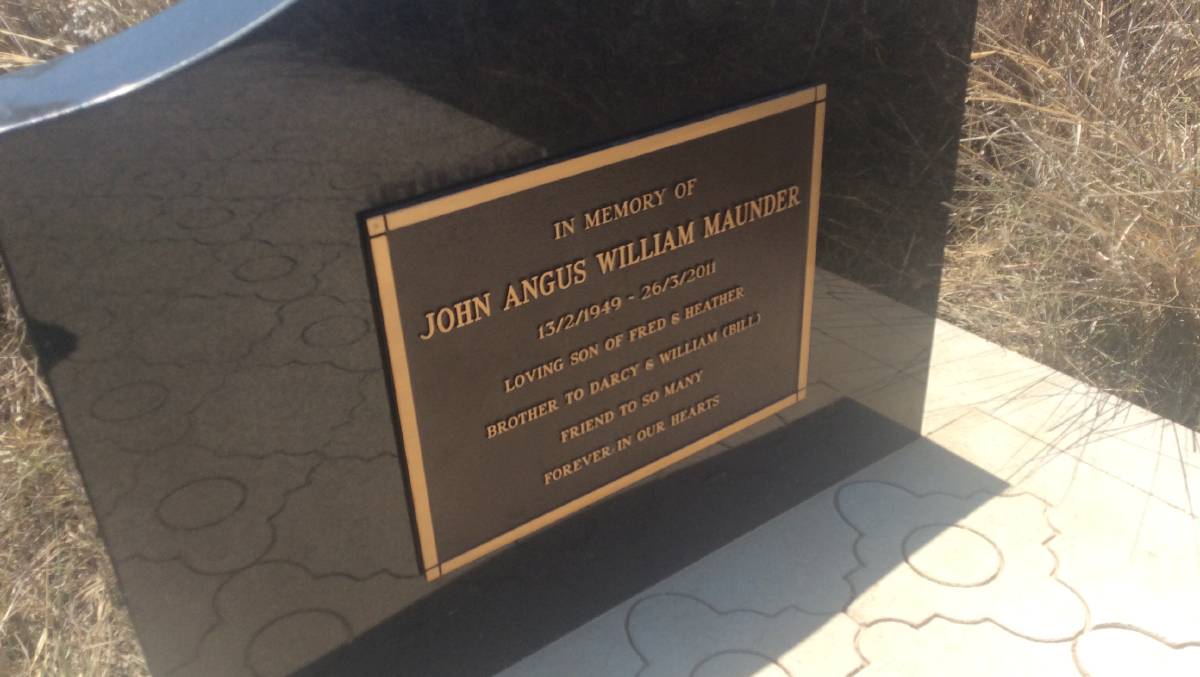 John Maunder is buried in the Jolimont cemetery, along with other members of the extended Hamilton clan.

At some stage the heavy-duty corrugated iron roof will also be repainted. All of the old lead capped roofing nails have already been replaced with cyclone rated roofing screws.

"When it was built there were only 12 foot sheets of iron, so everything was set up in layers to make up the distances," Mark said.

"We'll certainly paint it at some stage, but the iron that is up there is so thick it's not really a problem.

"It certainly would have been a mighty job putting it all up there. And with the new screws, there's no chance it's going anywhere."

One of the many impressive features of the home is what the Bices call the 'square', a 9x9m open area located in the centre of the house.

"We're not really sure of its purpose but it is certainly a lovely area with a view straight out across the front verandah and over the gardens," Mark said.

"Perhaps it was an entertaining area before visitors went in one of the formal rooms or somewhere airy people could just sit and relax." 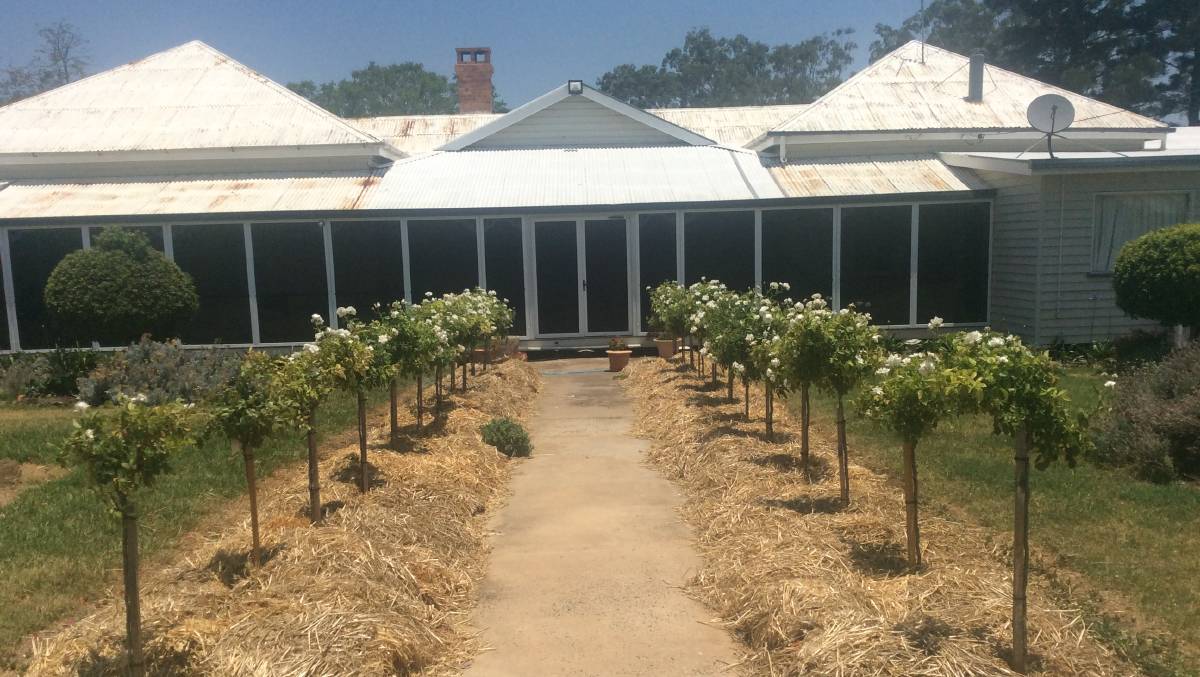 The expansive Jolimont homestead is a very comfortable place to live.

There are also bay windows off the two formal dining rooms and some of the bedrooms. The dining rooms have a back-to-back fireplace to keep guests warm on frosty winter nights.

Each of the spacious bedrooms were also fitted with the luxury of a hand basin.

Jolimont is also a home of many doors. A quick count tallied up 17 along the verandahs.

"You can understand that just painting the doors was a big job in itself," Mark laughed.

One of the surprises is there is no internal manhole.

"When we need to access the ceiling space, we have to take off a sheet of iron somewhere," Mark said.

"That's not really a problem, but it is curious why there is no easy way to get into the ceiling."

That has proved necessary on a number of occasions because the plumbing was sent through the roof cavity.

"We think the piping was put up top to provide some sort of fire protection. There was a big tank on a high stand that would have provided the water pressure, but also would have been very good in an emergency."

Rachael Bice said the expansive homestead was a very comfortable place to live.

"It's really a nice old home to live in and all of the antique furniture that John had a special interest in is just lovely," Rachael said.

"There's certainly plenty of space and because of its position, there is usually a breeze.

"Probably the biggest improvement for me has been replacing the insect screens. 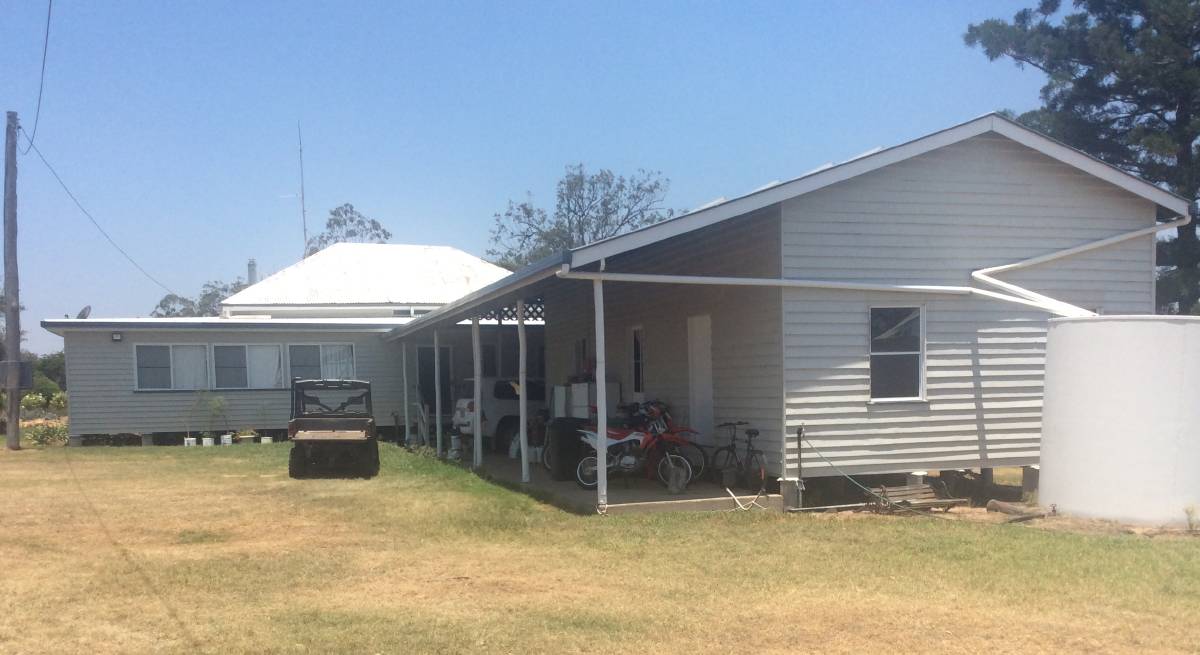 The original two bedroom cottage has been incorporated into the homestead as an accommodation wing.

"That has really made a big difference to living here."

One big improvement John Maunder made was to bring the original two bedroom cottage up to the homestead.

The homestead's roof was extended and the cottage added as an accommodation wing. The space between the two building creating a carport.

"John had originally tried to give the unused cottage away because he didn't want see it go to waste," Mark said.

"But he couldn't find anyone to take it. He moved it up to the main house and it just fitted in perfectly."

Located north east of Jandowae - or more specifically in the Jinghi Valley in the Diamondy district - Jolimont sits on a picturesque western spur of the Great Dividing Range.

Jolimont is thought to have taken its name from the French words 'joli mon' which roughly translated is 'beautiful little hill' - a reference to the views of the Bunya Mountains from the front of the house.

The Hamiltons started out at Oberon in NSW before taking up country at Bollon, and then heading east to what was described as the "lush, green" Jandowae district.

Jolimont was bought in 1905 by William Hamilton for 4500 pounds (that's $686,459 in today's money, according to the RBA pre-decimal inflation calculator).

Like many properties across the Darling Downs, the Hamiltons originally ran both Merino sheep and Hereford cattle, before moving exclusively into cattle.

Broadacre farming came later, when the machinery became available to handle the conditions.

Jolimont is well described as a good mix of country, running from alluvial flats alongside Jinghi Jinghi Creek (a tributary of the Condamine River) to highly productive brigalow, bottle tree country onto harder ironbark and pine ridges. 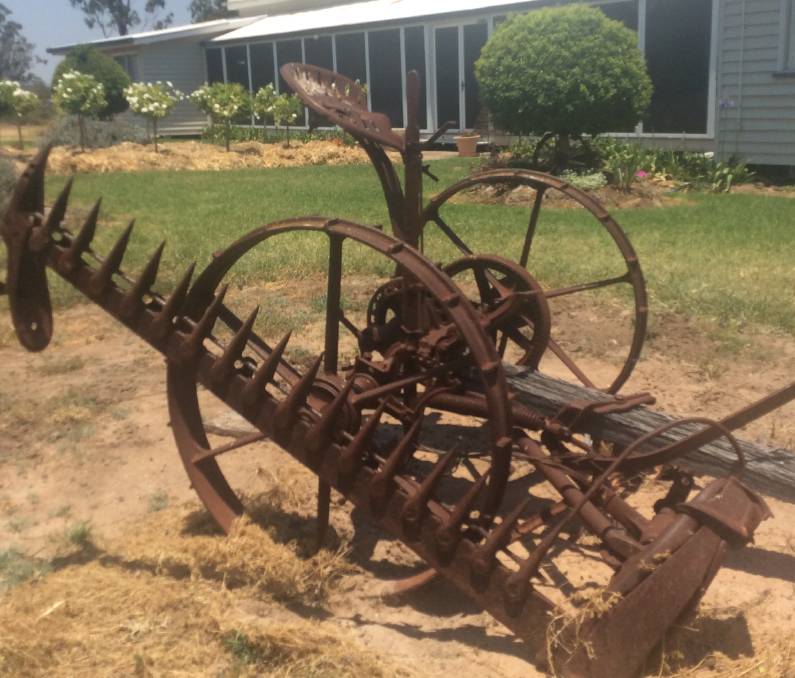 Jolimont was taken up by the Hamilton family in 1905.

The Bices moved across from Tara and also have the nearby 770ha property Moyhu, and are continuing to develop both blocks.

They run a breeding herd of 300 Santa and Angus cows with the aim of producing 400kg feeders for the feedlots.

The cattle enterprise is backed by about 400ha of cropping country, which is used to produce fodder.

"The Santa and Angus genetics and resulting Sangus cattle are certainly popular with the buyers and we've geared our operation to meeting that market."

Regardless of the plans for the homestead, the business of running a cattle property comes first and the ongoing drought continues to bite hard. This week cows are in the process of being sent on agistment to Walcha in NSW.

"Renovating a big, old homestead like this all takes time and there's are certainly plenty of interruptions, but we're getting there," Mark said.

"It will certainly be great when we can say we are done."