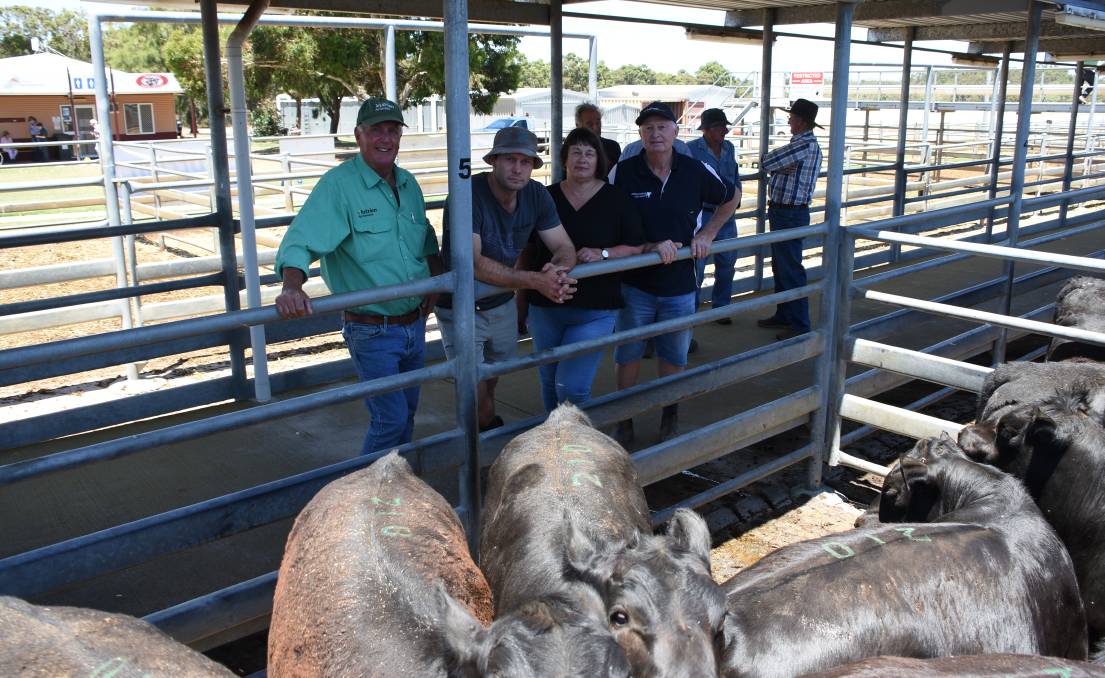 The Bairstow family, Arizona Farms, Lake Grace, were the biggest vendors in the sale selling 458 steers to a top of $1799. Looking over one of the family's pens before the sale got under way were Nutrien Livestock, southern manager Bob Pumphrey (left) and Luke, Karen and Noel Bairstow.

VENDORS, buyers and agents were in a daze when they walked out of the yards at last week's Nutrien Livestock ninth Special Angus Weaner Sale at Mt Barker after it set a new benchmark for weaner sales in Western Australia.

It wasn't because they had been in the sun too long, but because they couldn't believe what they had just witnessed with the sale grossing more than $2.567 million.

There were plenty of comments from agents and buyers it was the dearest sale they had ever seen.

With plenty of demand from both local and Eastern States buyers, the sea of black Angus calves that had been weaned and treated with Bovi Shield, meaning all the work was done for buyers, wasn't short of attention at any part of the sale. All Nutrien Livestock, auctioneer Harry Carroll had to do was count up the bids.

But it wasn't only the demand from buyers in the yards that helped achieve the impressive result, there was also plenty of action on the AuctionsPlus platform.

There were 79 registered bidders logged in to the sale on AuctionsPlus from New South Wales, Victoria, South Australia, Tasmania, Queensland, the Northern Territory and WA and these bidders placed 318 online bids.

This resulted in 55 pens/749 head (44 per cent of the yarding) being sold to four online buyers one based in Victoria and three from New South Wales.

There were also an additional 45 viewers logged in to watch the auction.

The standard for the sale was set from the opening pen when Mr Carroll knocked down the 14 steers averaging 428kg at 450c/kg to an AuctionsPlus buyer putting $1925 a head in the pocket of vendor Darren White, from Casual Flats, Peaceful Bay.

And from there on buyers knew what they had to pay.

Mr White also received $1730 a head for a pen of 14 head averaging 393kg which received a bid of 440c/kg also placed on AuctionsPlus while a third pen of 15 steers averaging 350kg offered by Mr White sold at 442c/kg to Nutrien Livestock, Brunswick/Harvey agent Errol Gardiner, to return $1547 a head. 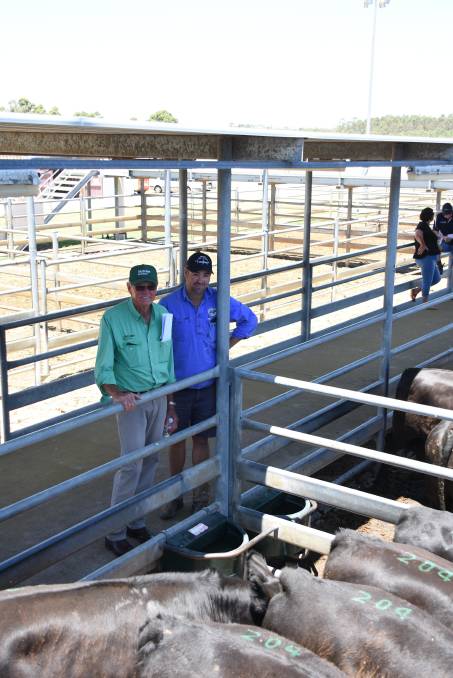 The Carroll family, Rayview Park, Albany sold 208 steers in the sale to a top of $1830 a head. Looking over one of their pens before the sale were Harry Carroll (left), Nutrien Livestock, Mt Barker and son Jarrad.

The Carroll family, Rayview Park, Albany, who have been selling in the sale since its inception, were one of the bigger vendors in the sale offering 208 steers.

The Bairstow family, Arizona Farms, Lake Grace, were the biggest vendors in the sale trucking in 458 steers which weighed from 294-426kg.

The Lake Grace operation saw a top price of $1799 after 12 steers averaging 426kg from the operation were knocked down to AuctionsPlus at 422c/kg.

Another line of 12 averaging 413kg were also written down to AuctionsPlus this time at 434c/kg to return $1790 a head to the Bairstows. Rebecca (left) and Bianca Blyth, MJ Blyth & Co, Manypeaks, were at the sale to see their family's weaners sold. In the sale the Blyths sold 49 steers to a top of $1594.

Another bigger buyer of the Arizona Farms' steers was Mr Gardiner for his grazier client.

Eight pens of lighter steers weighing 294-338kg from the operation sold to AuctionsPlus from 444-462c/kg.

Original sale vendor Mike Twentyman, MI & DM Twentyman, Nanarup, again supported the sale with numbers offering 87 steers which topped out at $1748 when a pen of 13 averaging 403kg was knocked down to Mr Brown for PRT at 434c/kg. Another sizable draft of 89 steers was offered by the Miell family, JR & WR Miell, Redmond and Narrikup.

The heifer run may have been much smaller in size but it attracted just as much competition.

The top price in the heifer offering was $1568 achieved by DJ & BE Bell, when it sold a pen of 10 averaging 394kg at 398c/kg to Nutrien Livestock, Margaret River agent Jock Embry, who purchased them for Cosy Creek Farms, Manjimup.

AuctionsPlus buyers dominated the lighter weight heifers bidding to a high of 454c/kg for 12 weighing 228kg from an undisclosed vendor while GD & SC Jones, Kojonup and LT Toovey & Sons saw bids of 450c/kg on their lightweight pens.

The Kojonup operation sold a pen of 13 weighing 283kg and the Tooveys sold 12 weighing 293kg at 450c/kg to AuctionsPlus. NUTRIEN Livestock, Mt Barker agent and sale auctioneer Harry Carroll said it was an exceptional sale in terms of both the prices received and the quality of calves offered.

"The quality of the yarding was unequalled and a credit to the vendors," Mr Carroll said.

"In the nine years of sales the quality of weaners offered has just got better and better through vendors using better genetics and benchmarking themselves against others in the sale.

"All the calves in the sale were weaned and had been treated with Bovi Shield and that has been well and truly recognised and the vendors are being paid the extra for doing what they do.

"In terms of the sale and the prices received the market was way above our wildest expectations, it was probably up 20-30 cents a kilogram on expectations.

"The heavy calves which were more than 390 kilograms made extraordinary money.

"It was the first time we have used AuctionsPlus for the sale and that was a success with strong buying support on the platform.

"We saw strong buying support not only from the Eastern States on AuctionsPlus but also a buyer in attendance who was purchasing for both feedlots and the paddock, which took a large percentage of the yarding.

"There was also good support at the yards from local WA lotfeeders and graziers but because of the strength of the market found it hard to buy.

"I have been involved in some big sales over my nearly 50 year journey in the livestock industry and none have come close to this one.

"It has certainly set a new mark for weaner sales in WA."