Weaner beef cattle were in demand at Boyanup

This selling season's eighth standalone weaner fixture saw the Elders and Nutrien Livestock teams present an outstanding combined yarding of 1438 steer and heifer calves, weaned for a minimum of 10 days and featured numerous lines of weaner cattle coming into the sale from the Wheatbelt region.

Eastern States' activity, both through buying orders and on the AuctionsPlus platform, further fuelled competition between local lotfeeders and graziers which saw the market generally firm to slightly stronger across most descriptions on the previous sale.

Heightened competition on lighter heifers saw 400c/kg as the new norm for both sexes with a majority of the heifer descriptions and all steers (excluding a couple of heavyweights) selling for 400c/kg and beyond.

At the completion of selling, auctioneers Alec Williams, Elders, Margaret River and Chris Waddingham, Nutrien Livestock, Capel, had guided the sale to eclipse the two million dollar mark with a combined gross of $2,103,626 at an overall average of $1463.

It was the Elders South West livestock team's turn to kick off proceedings this sale with their yarding of 516 steers and heifers.

It took until the 15th pen where a marked out 525kg Angus steer offered by Joe Bendotti & Co before Mr Williams had sold the sale's $1869 overall top per head price, knocking it down to the Tawkin Super Fund for 356c/kg.

Nutrien Livestock, Boyup Brook agent Jamie Abbs snapped up two of the three lines of heavier Angus steers which opened the sale offered by P & F Giadresco & Sons, paying to $1783 and 430c/kg for a line of 12 steers averaging 415kg.

Dean Ryan, Central Stockcare, was a prominent buyer throughout the sale and opened his account from the outset, paying $1770 at 418c/kg for 13 of the Giadresco family's steers weighing 424kg.

FR & LF Prosser, Scott River, was the volume vendor in the Elders section of the sale with a large draft of Angus, Charolais and Shorthorn cross steer and heifer weaners.

Mayfield Park Farms collected a few pens of lighter steers bidding to 490c/kg for five Angus steers averaging 276kg from the paddocks of J & V Tillman to cost $1352, as did Wade Krawczyk, Elders, Waroona, but at more mediumweights, paying to a 484c/kg top liveweight price for his lightest selection of 12 Angus steers averaging 340kg offered by Telarah Farms to cost $1472. 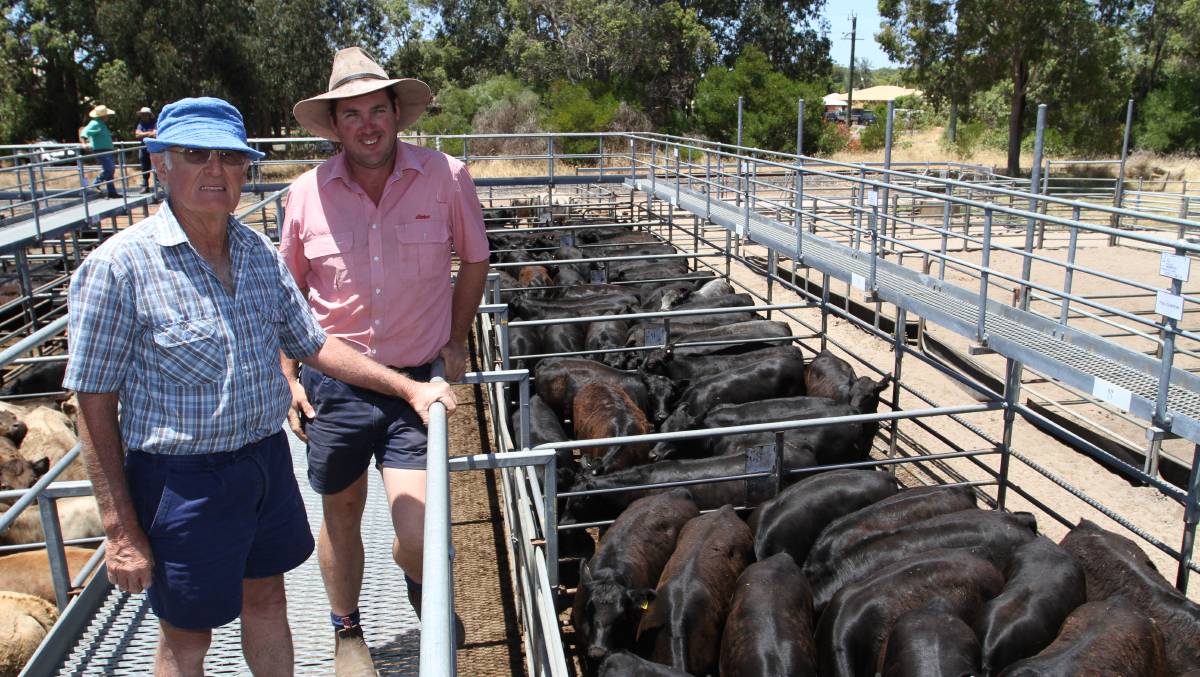 Mr Ryan opened the section by paying $1510 at 396c/kg for 11 Charolais cross heifers averaging 381kg from the Prosser family's draft, while Graham Brown, buying for a South Australian order, paid the next highest price of 388c/kg ($1525) for eight Angus heifers weighing 393kg trucked in by Yourdaming Grazing.

The Bendotti family's heifers also featured in the top prices, with a line of 13 Angus heifers weighing 284kg topping Elders liveweight prices with Mr Krawczyk bidding 454c/kg at $1287 who later bid the next highest price of 436c/kg for a further 10 Angus heifers averaging 311kg from the Tillman's consignment.

The Nutrien Livestock South West team offered the greater numbers at the sale with 922 weaners featuring a dominant number of calves from the Wheatbelt region through Nutrien Livestock Waroona, agent Richard Pollock's clients.

Mr Brown earlier paid $1792 for a heavy marked out calf in a pen of Angus steers offered by Oak Park Pastoral Company with the 495kg steer making $1792 at 362c/kg.

Armed with several orders, Mr Pollock was a prominent buyer in this section paying to $1701 at 438c/kg for 12 Red Angus cross steers weighing 388kg from the large draft of calves offered by the sale's biggest vendor Terrica Valley, Karlgarin.

Mr Pollock purchased three consecutive pens of the Terrica Valley steers at solid rates including the next highest price of $1699 also at 438c/kg for 12 Simmental cross steers weighing 388kg.

Other higher steer prices included $1698 at 426c/kg paid by Mr Ryan for 10 Murray Grey cross steers averaging 399kg from the paddocks of LG Ockwell and the following pen of nine Angus steers weighing 393kg from DP Scherini for $1689 at 430c/kg.

Mr Brown opened this section of the sale with a 416c/kg bid for 11 Angus cross steers weighing 400kg, trucked in by AP & JW Whitford to cost $1664 for a local order.

Mr Tarbotton operated at the top of the liveweight market for a few pens of lighter steers and earlier paid 506c/kg at $1335 for 12 Simmental cross steers weighing 264kg from Terrica Valley.

Maroondah Farms, Yealering, received 514c/kg for 10 Angus steers averaging 262kg secured by Creekview Farm to cost $1344, with their previous pen of Angus steers weighing 275kg knocked down to AuctionsPlus for 496c/kg at $1364.

RA & A Maiolo & Son, Narrogin, offered good numbers of Angus steers at the sale with their liveweight prices also reaching 496c/kg at $1369 for 10 steers averaging 276kg, one of two pens of the Maiolo steers purchased by Jock Embry, Nutrien Livestock, Margaret River.

An outstanding draft of Murray Grey heifers offered by CJM & NJ Tapper, Hyden, commenced the heifer run and took the sale's top-price honours with a line of nine heifers averaging 443kg, secured by Mr Abbs for $1835 at 414c/kg, who also snapped up the first pen of nine weighing 464kg for $1800 at 388c/kg.

DP & GR Cowcher claimed the next two pens of the Tapper's heifers paying to $1665 at 394c/kg for eight heifers weighing 423kg.

Terrica Valley's heifers also featured in the higher prices with 11 Simmental cross averaging 351kg purchased through AuctionsPlus for $1511 at 430c/kg.

The sale's 476c/kg top liveweight heifer price was paid by AJ Neill for 16 Simmental cross heifers from Terrica Valley weighing 260kg to cost $1238, who also paid 458c/kg for the previous pen of heifers of same description averaging 282kg to cost $1290.

"Once again there was renewed Eastern State's competition on the AuctionsPlus platform, which contributed to a very strong sale across the board, along with the usual South West grazier enquiry and continued lotfeeder and shipper enquiry contributing also," Mr Williams said.

"There was a big percentage of heavier weighted calves more than 330kg in very forward condition presented for this time of the year.

"Overall, most categories were equal in value to last week's sale, with slight price fluctuations, north or south, depending on quality."