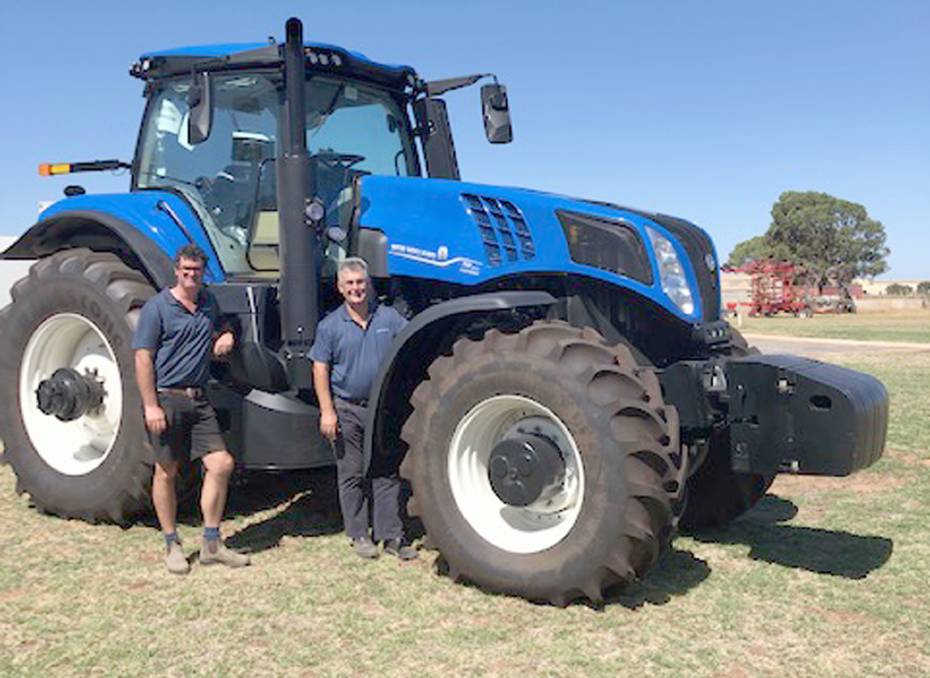 McIntosh & Son, Geraldton, sales manager Josh McBeath (left) and branch manager Craig Ajduk with one of the New Holland T8 models that will be featured at the roadshow.

The latest New Holland tractors will be demonstrated at a McIntosh & Son roadshow.

FRESHLY-landed in WA, the latest tractor range from New Holland is likely to garner plenty of attention from potential buyers at the upcoming roadshows from McIntosh & Son, the first of which is happening just east of Geraldton on Thursday, March 4.

The T8 and T9 models showcase the best of New Holland's power, comfort, efficiency and versatility - something that McIntosh & Son, Geraldton, branch manager Craig Ajduk said would appeal to operators who can put the new machines through their paces in hands-on demonstrations.

The roadshows, including this first one on the Geraldton-Mt Magnet Road at Moonyoonooka (watch for signs), will also feature machinery such as the latest Miller 7000 series sprayer, Gessner HDR deep ripper, Grizzly wheel track renovator and the Agri-Spread AS2000 spreader.

It is the first of a series of similar roadshows that will head south over the next two months to areas surrounding McIntosh & Son locations Statewide.

Mr Ajduk said with the new tractors only recently arriving, this would be the first time most people had laid eyes on them, let alone had a chance to drive one in a paddock.

He said the ability of operators to control their business from the comfort of their cabs was a big selling point for the T8 and T9s as both have PLM Intelligence that is controlled by an in-cab monitor.

The new system features custom layout options for each individual job and operator and three-dimension maps, keeping operators on the cutting edge of technology.

Mr Ajduk said through the advanced telematics in these models, owners had real-time connectivity to their New Holland dealer.

The Genesis T8.320 tractor is rated at 250 engine horsepower, but with Engine Power Management (EPM), can produce up to 320hp, while the top of the range Genesis T8.435 is rated at 380hp that is boosted to 435hp when using EPM technology.

Not only does it deliver the goods in the power department, but Mr Ajduk said the enhanced operator comfort, including more USB ports for charging your devices etc, meant it was like a home office.

He said the bigger T9 series was the next-generation tractor that was the most precise and powerful tractor in the New Holland range, with output ranging from 425hp to 682hp.

Mr Ajduk said the other new design feature was information projected onto the dash screen rather than on a side pillar, meaning operators can look directly ahead to get a lot of the data they needed.

He said the latest New Holland PLM Intelligence technology meant a farmer could dial into the tractor remotely to check on performance and it was also easier to manage the fleet, including servicing.

While the latest New Holland tractors will headline the drive days, Mr Ajduk anticipates strong interest in the other machines, including the new 7000 series Miller sprayers that are highly regarded for their reliability.

He said the new Gessner rippers were also making a big statement with their strength and durability.

The Grizzly wheel track renovator is also expected to draw a crowd, particularly with the Geraldton area suffering from a lot of wind erosion, giving local farmers the ability to renovate the soil, particularly in the wheel ruts.

Mr Ajduk said the roadshows were a great chance to test all the machinery, as well as talk to the various equipment specialists who will be on hand to answer any questions.

Recent rainfall in the area meant the mood heading into the season was upbeat.

"Yes is it very buoyant and there is a bit of spraying and spreading going on," he said.

"This is on the back of a reasonably strong season in the Mid West last year.

"Demand for machinery is extremely strong, which is great, not only for us, but also for customers as trade values are strong too."

Mr Ajduk said the demand across the whole machinery range was consistent, but the biggest calling was for tractors and tillage gear, "but we have been selling sprayers, ground engagement tools and spreaders as well".

"The message is clear - if you are looking for new equipment, you will need to order early," he said.