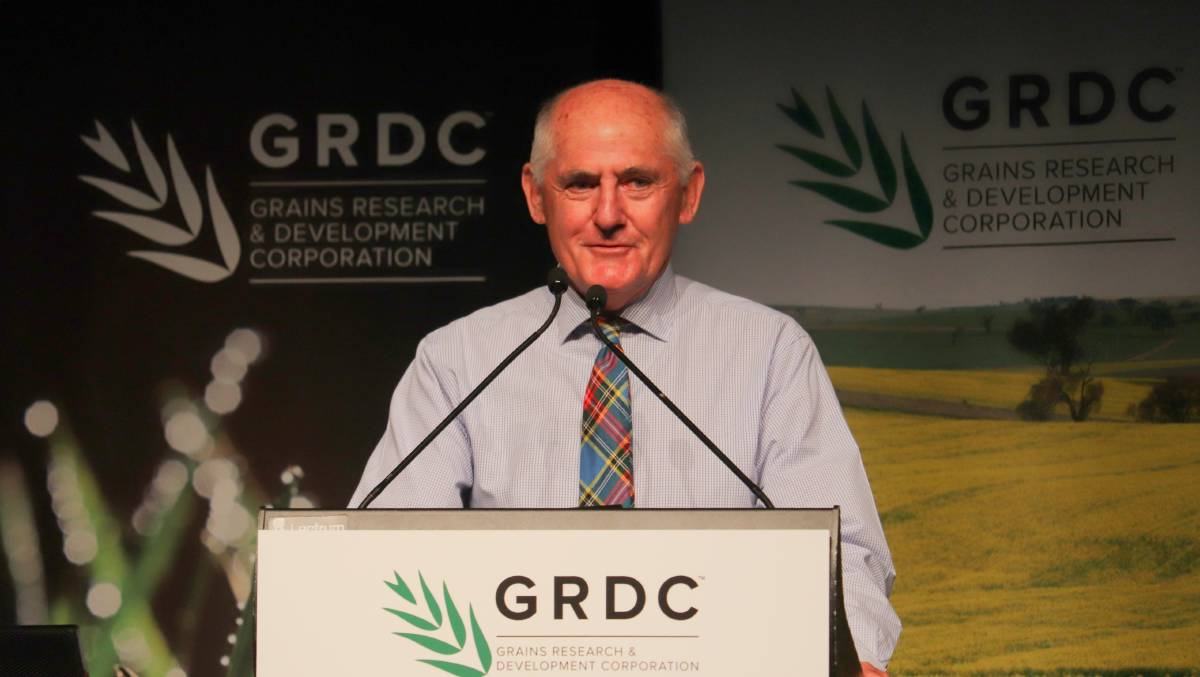 Emeritus professor Stephen Powles received the Seed of Gold award at the Grains Research Update in Perth on Monday morning.

A RARE and prestigious award has been handed to global herbicide resistance expert Stephen Powles in recognition of his lifetime of service to the grains industry.

Emeritus professor Powles is only the fourth person to ever receive the national Grains Research and Development Corporation (GRDC) Seed of Gold, which he was presented with on Monday at the Grains Research Update in Perth.

His name is synonymous with herbicide resistance research and knowledge and he is a renowned expert in this field - from molecular mechanisms through to onfarm management.

"It is crucial to ensure research does not sit on a shelf, but that it is extended and helps to improve growers' practices, technologies and, ultimately, their profitability," Mr Lee said.

"There wouldn't be an Australian grower who has experienced herbicide resistance and hasn't heard of Stephen Powles, or heard his catchphrase 'when you're on a good thing, don't stick with it' - referring to the need to mix up the farming system to increase diversity and attack resistant weeds."

Herbicide resistant weeds appeared in Australian crops in the early 1980s and professor Powles was a pioneer in researching the issue.

In the 1990s he became a founding director of the Co-operative Research Centre for Australian Weeds Management, based in Adelaide.

Professor Powles said it was a great honour to receive the Seed of Gold award.

"Recognition by one's peers is the most precious of all and I have deep affection for the Australian grains industry," professor Powles said.

"I wouldn't be receiving this award if it wasn't for all the good people that have worked with me over the decades and there are hundreds of them."

In 1998, backed by GRDC investment, he was appointed to lead the then newly-established WA Herbicide Resistance Initiative (WAHRI) at The University of Western Australia.

WAHRI later became the Australian Herbicide Resistance Initiative (AHRI), again with GRDC support and professor Powles was director of AHRI until he stepped down from the role in 2018.

AHRI, which has helped to ensure widespread adoption of important developments such as harvest weed seed control technology, attracts more than $2 million in investment from GRDC annually and focuses on resistance evolution, resistance mechanisms and resistance management, as well as communications.

Professor Powles said he particularly wanted to thank the farmers.

"My mother was a single mother and she raised five children in poverty - we had a small dairy farm which we lost but I learnt a deep love of agriculture from those days," he said.

"I respect and admire farmers and it has been a pleasure to interact with so many farmers over the years.

"I have always listened closely to our Australian grain farmers who are among the best in the world."

"I have had the pleasure of working with so many young, bright, smart undergraduate students, honour students and PhD students - some of them who have gone into careers in the grains industry and some of them into research," professor Powles said.

"It's true that I have been the conductor of the orchestra, but a conductor is only as good as the musicians that he has and I wouldn't be here today if it wasn't for all the bright young people that have worked with me over so many years."

On top of all his other achievements, professor Powles was also a non-executive director of the GRDC, stepping down in 2020, and he owns a grain cropping farm at Kojonup.

"I would never have become a professor if it wasn't for two women," he said.

"The first is my mother who raised five children in poverty and ensured we went to school every day.

"The second is my wife of 43 years - without them, I wouldn't be here, so I dedicate this award to them."