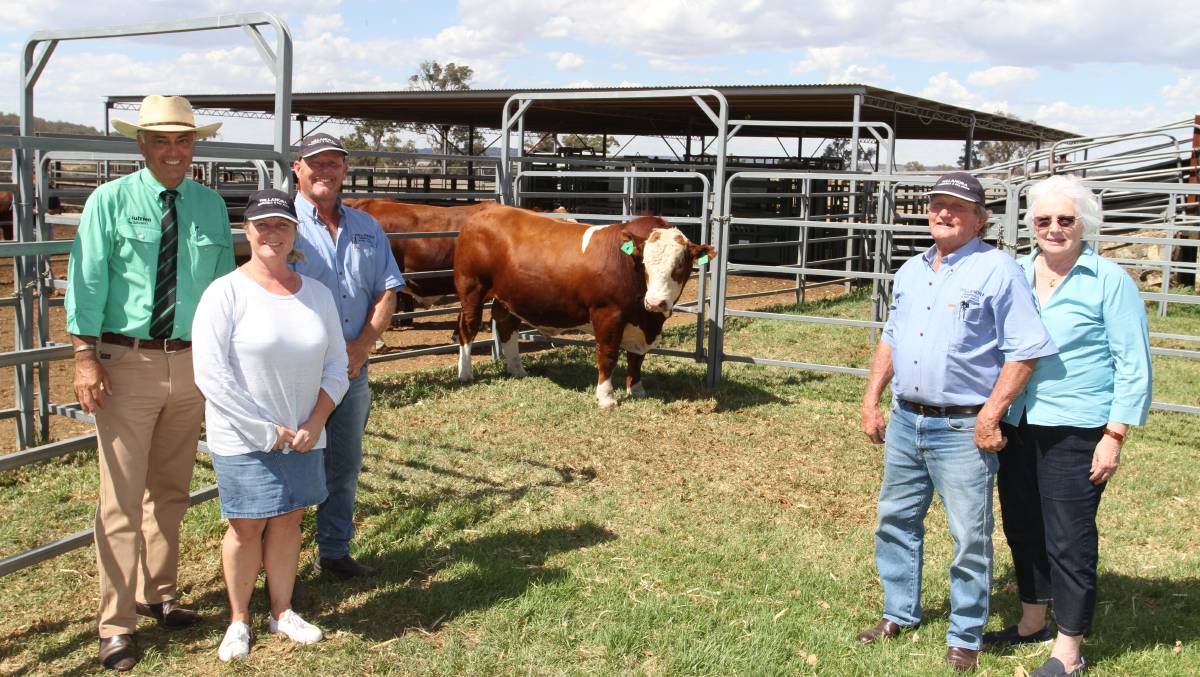 An impressive line-up of 58 bulls for the Willandra Simmental and Red Angus sales.

In their 33rd sale, the Cowcher family presented an impressive line-up of 58 bulls that were widely described by those in attendance as the best and most even team seen at Willandra.

The sale also featured the first ever offering of Simmental stud heifers which were also well received and sold to a top of $10,500.

The 62 registered buyers in attendance and numerous prospective buyers operating online responded accordingly, with many buyers prepared to go the extra yard to secure bulls of choice.

Heightened demand swung all sale indicators northward with improved results across the board. At the completion of selling, the Nutrien Livestock team led by auctioneer Michael Altus, had sold 53 bulls at auction (91 per cent) for an average of $7274 and five of the six unjoined 2020-drop stud heifers to average $5200.

An additional 10 bulls sold at auction from last year at a strongly-improved average by $1140 and overall saw the sale's gross returns for bulls jump more than $120,000.

The Red Angus line-up almost caught their stablemates in the average stakes improving by almost $2000 on last year, falling just $100 shy with 17 of 19 bulls (89pc) finding new homes under the hammer at a $7206 average. The 820kg polled late May 2019-born son of Woonallee Jericho and a strong Willandra bred dam Evita G116, impressed as he entered the sale ring in lot four with several suitors competing for his services.

Mr Cook said he met the Cowcher family when he judged at the Perth Royal Show for the first time as a 23-year-old and has enjoyed a strong stud relationship with them since.

"Talking to the Cowchers, they are such genuine people," Mr Cook said.

"I've visited their place a few times, we like their cattle, they run them similar to ours and they look very much alike in the paddock in type.

"We find it difficult to find sires with good Breedplan figures these days in the traditional Simmental world and we were very happy with the Willandra bull we purchased last year.

"You're always looking for a bull, even if you're not looking.

"I saw the videos and photos of Q94 and spoke to Peter and from how he described him, he was just what we were looking for so I didn't want to miss out on him.

"Medium frame, we like a fair bit of softness in our traditionals and I like its hair type, bit like a Brahman, soft fine skinned cattle and although he wasn't scanned due to COVID, I think he will scan very well on his rib and rump and IMF fats.

"We have used two Woonalee bulls in the past that have Tornado in their breeding, this bull is by a son of Tornado but its dam side is an outcross to us."

The $9500 second top Simmental price was bid on three occasions.

HNH Grazing & Co, Pinjarra, paid it from the outset for one of their two Simmental bulls purchased at the sale, an early-April 2019-born son of Willandra Lee Martin (by Topweight Jack Arta) and a Woonallee Brigadier daughter penned in lot one.

The extremely high ranking polled/scurred bull was a trait leader for northern (NI) and terminal indexes and CW, top 1pc for 200-DW and domestic maternal index (DMI) and top 5pc for 400 and 600-DW and export maternal index (EMI).

Nannup grazier GC & CA Brown bided their time until lot 16 before paying $9500 for their selection, a 780kg early May 2019-born horned bull by Lee Marvin which also displayed impressive data including trait leader for 200-DW and VT index, top 5pc 400 and 600-DW, CW and the balance of indexes.

Long-time client of more than 20 years Gordon Atwell, Welldon Beef, Williams, consistently buys big numbers at the Willandra sale and this year's sale was no exception, adding 10 new Simmental bulls costing anywhere from $4000 to $9000 for their sire battery to cover their significant commercial Angus breeding herd.

Denmark graziers G & TJ Ross & Co operated from $5000 to $7000 for four Simmental bulls and Deeside Muirs, Manjimup, paid to $8500 for a team of three Simmental bulls.

Terrica Valley, Hyden, appreciates the virtues of both breeds in a commercial beef operation and sourced two Simmental bulls for $7500 each and three Red Angus bulls while S & T Granucci, Manjimup, paid $8500 and $8000 for two Simmental bulls.

The 750kg mid-April 2019 born son of WD Red Mr Michigan and a Tronar Buccaneer daughter was the fourth bull to enter the sale ring.

The sleek bull was below average for birthweight but displayed a solid balance of figures including in the top 10pc for milk, top 15pc for VI and top 20pc for 200-DW.

McVay Pastoral also secured a Willandra Memphis son for $9500 later in the sale.

Manager Rob Revell said they had been buying sires at Willandra for around five years to use in their nucleus herd to breed their own composite bulls for their Red Angus-Gelbvieh commercial operation.

He said the bull was what they were looking for and the type owner Sarah McVay likes to use.

McVay Pastoral heifers are joined at the end of February and mid-March for their cows and target the feeder and grass fattening markets with their calves.

Another regular buyer G Sharp & Son, Denmark, with his agent Rob Williams, Westcoast Wool & Livestock, Denmark, was the equal volume buyer in the Red Angus line-up with three bulls and one bid shy of top dollar when he paid $11,000 for a late April 2019-born son of Wyndarra Stew M36.

Buyer Graeme Sharp runs a pure Red Angus commercial herd of 160 breeders which he will look to increase with the recent availability of land which had been leased out.

He said he had been sourcing Red Angus bulls at Willandra for about 20 years and liked the sound conformation and genetics in their animals and his new bulls fit the bill.

"I don't like to worry about feet but you get a good bull at Willandra and we rely on the Cowchers with their knowledge and service."

Mr Sharp calves from March with his heifers and mid-April with the mature cows and begins turning off weaned or unweaned calves depending on the year at around 350kg at 9.5 months of age.

The classy unmated heifer was early June 2020-born daughter of Willandra Nepal and a Jack Arta-bred cow and is a trait leader for all indexes excluding VT (top 10pc) and CW, top 1pc for 400 and 600-DW and top 5pc 200-DW.

Mr Tuckey said the offering of heifers was an opportunity to tap in to some fresh genetics for his stud.

"She is an outcross to our herd with good conformation and figures and the style and type we look for," Mr Tuckey said.

"When we heard the Cowchers were offering heifers, we showed interest and were pleased to support the sale."

Mr Tuckey said they would look to flush the heifer at 12 months of age to use in an ET program in May.

Another Nepal daughter in the following pen was knocked down for the next highest price of $6000 to Nutrien Livestock manager Leon Giglia, bidding via phone for the Casa Toro Simmental stud, Jackson, Queensland.

The balance of the heifers sold to AuctionsPlus, Next Generation Simmentals, Boyup Brook and Naracoopa Simmental stud, Denmark. 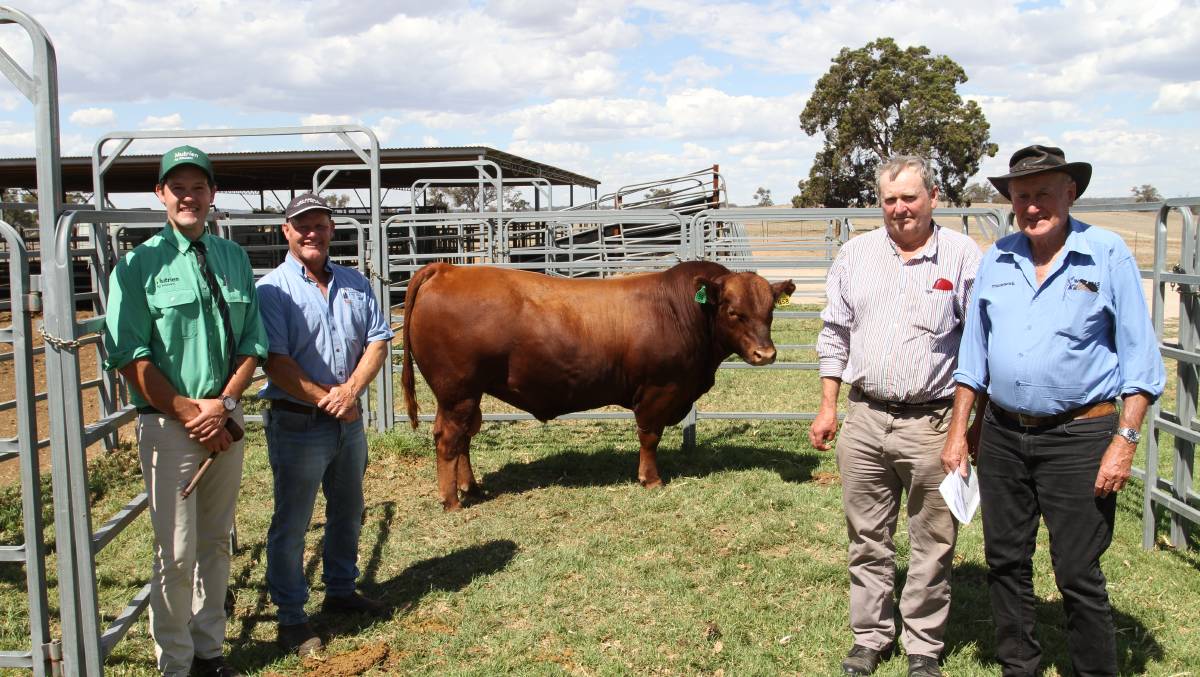