BUYERS bid up with confidence on big ticket items at a West Wubin clearing sale on February 18 for the Southcott family, assured the machines had been meticulously maintained and serviced.

Brothers Sam - the mechanic - and Alan Southcott have a reputation throughout the district for looking after their equipment, some of it only two-years-old and other items close to 50, but the presentation of each piece was a credit to them.

Polished paintwork, gleaming cabin windows, immaculate interiors and motors without oil leaks clean enough to eat your lunch off were a good indication of the care and attention lavished on their equipment by the Southcotts.

But the clincher for most were the neat, indelible marker notations written on every oil filter, beside every radiator cap, on every air cleaner housing and on every battery, indicating when oils, coolants, filters and batteries were last changed.

The tractor they bought had 2022 engine hours showing, the least on the three big tractors on offer at the clearing sale. "It's always a bit of a worry paying that much for used equipment, but it's been looked after and has less engine hours on it than the others," said Mr Forrester, who admitted to being concerned about what wife Clare would say when he got home and told her she was now the proud co-owner of another tractor.

The Forresters run a mixed cattle, sheep and cropping operation and the new purchase would be put to work pulling a Reefinator to improve gravelly soils.

A third big New Holland tractor, a 2017 T9.450 4WD model with GPS, but with single wheels and 2358 engine hours, sold for $270,000 to Marchagee grain farmer Michael O'Callaghan after a bidding war with a farmer from Bencubbin. Michele and Liam Dempsey-Doyle, Namban, checking out a 9kVA genset that later sold for $3000.

A 1991 Ford 8830 front-wheel-assist tractor with 4064 engine hours sold for $39,500 but much of the tractor interest centred on four older Chamberlain models.

People inspecting them said they were after cheap but reliable chaser-bin tractors.

About 400 people attended the sale, held on a hilltop with a picturesque view over a salt lake on an 1800 hectare section of farm the Southcott family is retaining and which is currently part share farmed.

There was strong support from the local community - the Southcott family arrived in West Wubin in 1953 when the brothers were young boys.

Sam and his wife Beth are retiring from farming, with the adjacent 4578ha Karawa West property where they lived, recently sold to a neighbour. "We've got three daughters and their husbands are not interested in taking it (farm) on so there's no one to pass it on to and we'd like to do some other things now," Beth Southcott said.

Alan will continue to live on the retained section of the property where the sale was held.

More than 200 registered as bidders, coming from as far away as Esperance, Jerramungup, Albany, Geraldton and the eastern Wheatbelt and there were enquiries from Queensland, Nutrien Ag Solutions Dalwallinu branch manager and sale organiser, Glen Jones, said.

"They (the Southcotts) are well-respected in the district and they have been long-standing Landmark and Nutrien clients," Mr Jones said.

"Now they (Sam and Beth) are going to have time to spend with their children and grandchildren, which is a good end to their farming life.

"It has been a fantastic day for them, the gear is good, it was presented very well, it was obvious it has been looked after and there was a very good result," he said. The sale generated $2.156 million before GST was added and all but six of the 164 lots were sold at auction.

Towards the end of the sale the Multistream had been offered as part of what can only be described as the missed opportunity of the day.

One of two Nutrien auctioneers, Dalwallinu branch manager Andrew Viola - he shared duties with Grant Lupton - coupled the Multistream lot with the 2009 Ausplow DBS D-260 series 18.2m (60ft) seeder bar with 25 centimetre (10 inch) spacings and DBS air kit, it had been used with.

The seeder bar was then auctioned on its own and sold for $262,000 to MJS Farming, Merredin. 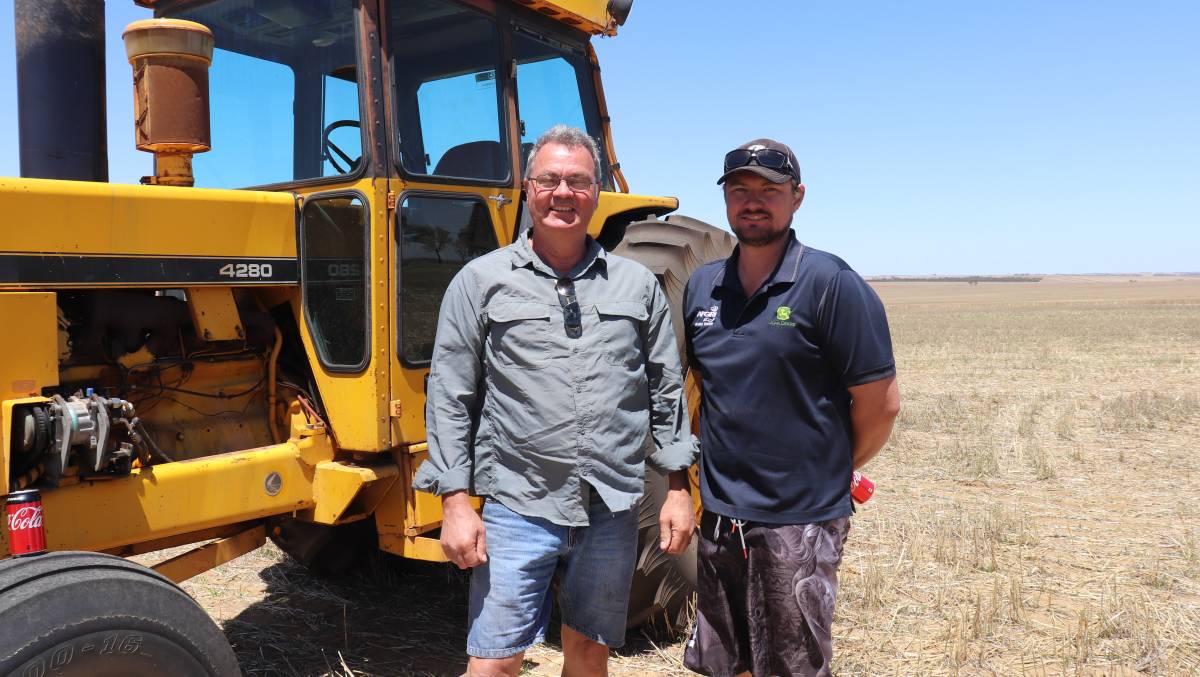 "Buy of the day", according to Mr Viola, was a bulka bag containing 800 kilograms of Bonito canola seed which was purchased by Hakea Farm, Coorow, for just $200.

Hugo, 3, and dad Alan Seymour, Miling, inspecting the 2011 Ausplow M18000 Multistream air cart that was initially passed in at a bargain price of $335,000 as a combined unit with the 2009 18.2 metres (60ft) Ausplow DBS D-260 seeder bar with DBS air kit beside it. Put up separately, the Multistream was then passed in without a bid at $100,000. It was then sold privately before the auctioneer had completed selling the next two lots.

The auctioneers also had to work hard with mixed success to sell a range of Dunstan mother, field and chaser bins.

With the region receiving some light rains in the previous week and morning mists providing enough moisture to put a tinge of green amongst the stubble, it was surprising both sprayers on offer were passed in - the 2012 8500l tow-behind Hardi Commander Terra Force with 36m boom at $55,000 and an immaculate 2017 self-propelled 9000l Hardi Rubicon with 48.5m boom and Trimble FM2050 GPS at $380,000.

The Southcott's Rubicon had been the first customer unit sold in WA. Sam Southcott was philosophical about the two big items not selling.

"We'll just put them back in the shed and leave them there for a while, there's no rush to get rid of them," Mr Southcott said.

"Overall though, we are very happy with the results of today," he said. Michael O'Callaghan, Marchagee, checks out the 2017 New Holland T9.450 4WD tractor with 2358 engine hours he ended up buying for $270,000 after winning a bidding war with a Bencubbin farmer.