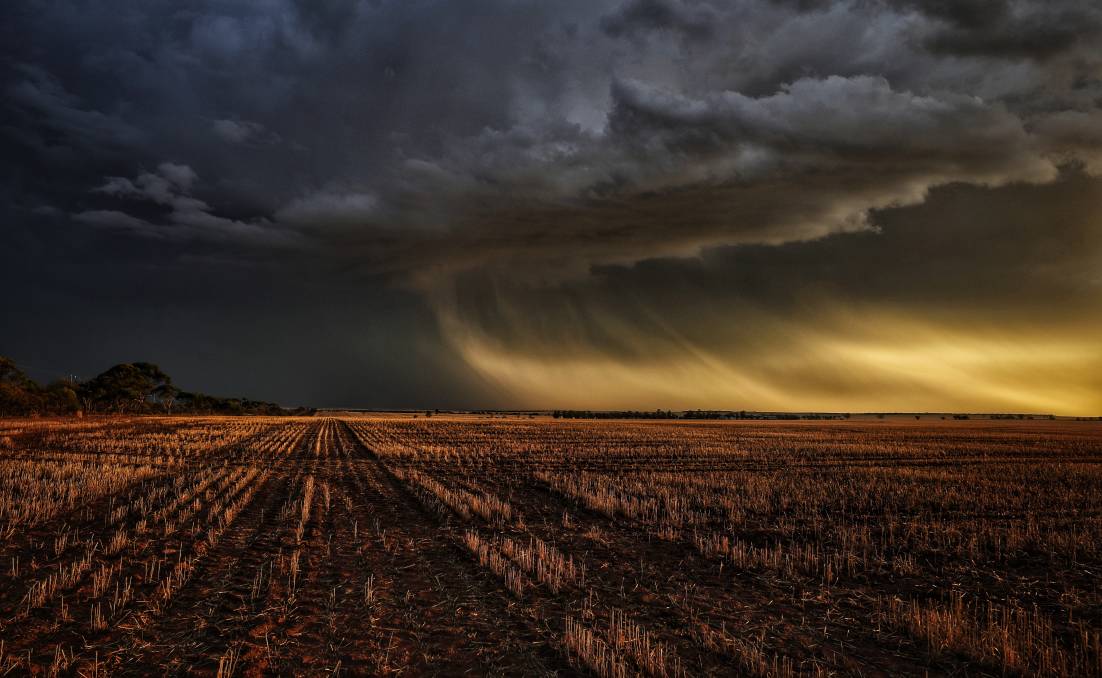 The sun broke though briefly at Dalwallinu last Monday night, just as the storms rolled in that brought a total of 115 millimetres to the area over three days. Photo by SkyworksWA.

The storm stretched from the Exmouth area into southern agricultural regions

WIDESPREAD rain not usually seen at this time of year has fallen across south western parts of the State, with vast areas of the grain growing region receiving a deluge of much-needed moisture.

Tropical moisture drawn southwards by a deep trough was responsible for the heavy rain and severe thunderstorms which stretched from the Exmouth area into southern agricultural regions.

In the 24 hours to 9am last Thursday morning, 112.8 millimetres was recorded at Eneabba (DPIRD rain gauge), which is more than eight times the March monthly average of 13.7mm.

While over three days last week, Dalwallinu received 99.4mm, which is four times its monthly March average of 23.9mm.

Dalwallinu farmer Murray White said his home farm received 90mm of rain over the course of last week, causing dams which haven't been full in over 20 years to be topped up to the brim.

"Last year we got 70mm of summer rain and not a lot during the growing season but we still had a really good harvest," Mr White said.

"We've had 130mm to date so far this year, so it gives us a lot of confidence to start seeding as we know we can rely on that subsoil moisture.

"We started sowing some oats for sheep feed earlier this week and if we get a bit more rain at the end of March or beginning of April, then we'll start seeding some canola and lupins."

A Bureau of Meteorology spokeswoman said the rainfall had been so intense in some areas that it resulted in a heightened risk of flash flooding.

"In any given year there's less than a two per cent chance of rain falling at a rate as quickly as experienced last Tuesday and Wednesday in Northam," the spokeswoman said.

Vern Dempster farms in Southern Brook, about 25 kilometres south east of Northam, and over the course of last week the home farm received 94mm, while the other properties received between 50mm and 60mm.

According to Mr Dempster, it was more than enough to get everything germinated and put a bit of reserve in the soil.

"When we get a good rain and early germination like this, it creates good feed for the sheep but does also mean we have to spray out the weeds for the upcoming crop," Mr Dempster said.

"We run about 7000 sheep and the paddocks were looking pretty bare and grim, but the rain should put a bit of cover on the paddocks that had been well eaten and were starting to blow.

"Because we're running quite a lot of sheep it's been increasingly difficult to run them in a dry year, so having a germination of feed at this time usually means that we'll have adequate feed for the year."

2019 and 2020 were both dry years on Mr Dempster's farms - last year one of the blocks only had 110mm for the growing season and the other only had about 150mm.

Because of that, the subsoil was very dry, but the 94mm that fell last week will put some reserve into the soil, meaning this year he won't be so reliant on getting good winter rain.

"This rain will possibly bring forward our overall sowing time, but that is dependent on having enough moisture to germinate the crops," Mr Dempster said.

"We seeded some oats and barley for sheep feed this week and that will germinate, but if we leave it another month then the topsoil will probably dry out and may not be enough to germinate what's planted.

"But what it does mean is that if we get another 10mm at the end of the month or beginning of April, we'll be fairly safe to germinate a crop on that."

After three consistent days of wild weather, the conditions eased on Thursday night and the risk of severe storms and heavy rainfall lessened, but showers still continued near the west coast and south coast on Friday.