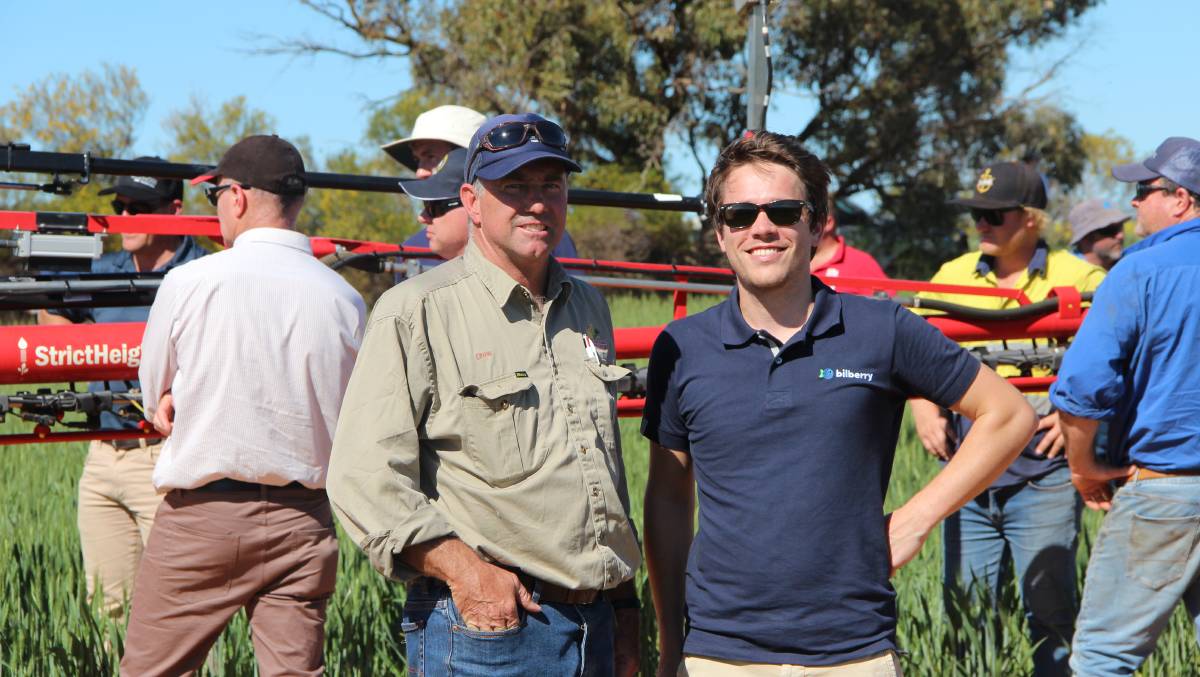 "We had been waiting patiently for technology like this to come along for about the past five years..."

AN average hit ratio of 90 per cent and average kill ratio of 80pc - that's the result of a 6000 hectare trial in Mullewa using new green on green technology which utilises camera systems to spray herbicides only on weeds.

Growers Andrew and Rod Messina purchased a 48 metre Agrifac self-propelled sprayer fitted with the technology from French start-up Bilberry in 2019, with the system used to spot spray broadleaf weeds, mainly radish, in wheat over the course of the 2020 season.

The camera system has since been used across almost 17,000ha in total, with the results of the 6000ha trial monitored closely throughout last year by independent agronomist Peter Norris.

Small plots of five square metres were created and the weeds were mapped and counted before each herbicide treatment, then 14 and 28 days after treatment, in order to assess the efficiency of the spot spraying system on the Messina's farm.

While the green on green technology was not yet commercially available in WA last year, the Messinas had early discussions with Bilberry and said they would be happy to trial it and wear some of the consequences if it misses.

"We had been waiting patiently for technology like this to come along for about the past five years, so as soon as it became a reality and we saw a video clip of it spraying radish in a wheat crop, we made moves to purchase it," Andrew said.

"We had a very big wheat program last year, so we thought it was the best way of potentially saving cost there and it was worth the risk."

While the hit ratio from the trial was impressive, what's equally as important is the amount of herbicide used, with an average chemical saving of 90pc when compared with blanket application.

"The saving was significant, in terms of the amount of herbicide saved, that has pretty much paid for the cameras in one year," Andrew said.

"In future we hope to do weed mapping with the cameras so we can keep track of our weed populations, that is something Bilberry is working on for the coming year and we're keen to have that up and running by mid-year."

Andrew was joined by Bilberry co-founder and chief executive officer Guillaume Jourdain, who relocated to Perth in 2019, at the Liebe Group Crop Updates in Dalwallinu last Wednesday.

Mr Jourdain explained that the technology consists of cameras that are put on the sprayer's booms, with one camera every three 3m along the boom, as well as two cameras on the cab.

"In real time it is able to spot a difference between the crop and the weeds, so the camera can control when the nozzles on the sprayer open and close so that herbicide is only sprayed on the weeds," Mr Jourdain said.

"The system is made possible through artificial intelligence - the algorithm is trained by taking lots of pictures of weeds in crops in lots of situations, allowing the cameras to recognise patterns.

"It works for green on brown situations for summer spraying, with the system detecting all living plants and there is now one application that is commercially available in WA to detect all broadleaf weeds in cereals in green on green situations."

While the technology does offer an exciting new option for weed control, Andrew made it clear that it would only work if growers are doing everything else right on their farm.

"Growers can't just expect to buy these cameras and reduce their radish numbers straight away," he said.

"All it's doing is saving you money on your best country that has already been managed well and you can also use it in your green on brown summer spraying, so you've got one sprayer that can do both.

"If you're going to go into this technology, you need to back it up at harvest, to get any escapees that got missed, half killed or might be resistant."

Growers at the Liebe Group event were rightfully excited by the hit and kill ratios presented, but the technology does also present a unique opportunity to help potentially delay herbicide resistance.

Through the use of the camera system, at least 10 times less chemicals are applied to a crop, which could help to reduce the number of weeds developing herbicide resistance.

"The cameras will also be a great tool to help growers understand what is going on, onfarm as we are developing the technology to be able to map weeds year after year," Mr Jourdain said.

"We're also working on developing an application for a blue lupins algorithm which will be especially relevant for growers in the northern Wheatbelt and we're also trying to target grass weeds in cereals."

The green on green technology is officially commercially available in WA and can be accessed through either Goldacres or Agrifac where it is factory fitted, meaning there is excellent integration between the cameras and the sprayer.