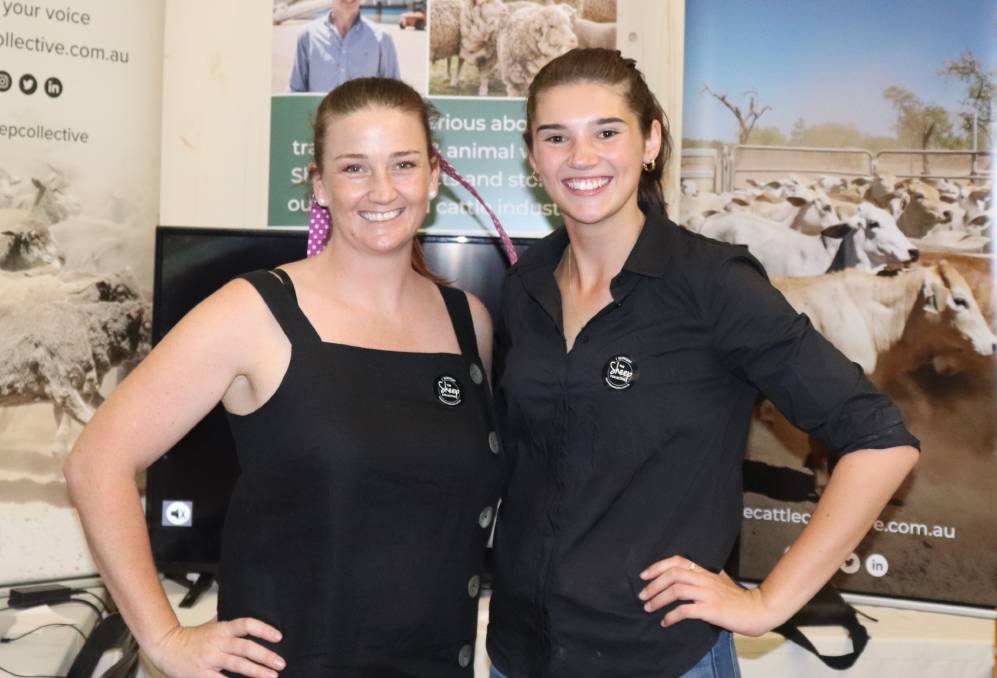 Livestock Collective managing director Holly Ludeman (left), with Brittany Bolt at the 2020 Make Smoking History Wagin Woolorama in 2020 where they were promoting the group, and when work was underway to merge The Sheep Collective and The Cattle Collective.

"It's such an encouraging environment that caters to your role in the supply chain."

THE Livestock Collective's Livestock Leaders workshop is making its mark on the future of the industry with 125 attendees expected to have completed the course by May 2021.

The course originated in Fremantle but has since expanded, with workshops held in Queensland, New South Wales and South Australia, and last month in the Northern Territory.

Courses have also been planned to be held in Victoria and Queensland before the end of the financial year.

WA attendee Brittany Bolt, one of 76 young and enthusiastic participants who has completed the course said "the Livestock Leaders workshop has equipped me with skills that are crucial for the future of agriculture".

"We are lucky to work in an industry we are passionate about and its important that we share that with the wider community and help build a connection with people outside our industries," Ms Bolt said.

"It's such an encouraging environment that caters to your role in the supply chain.

"Coming out of it, you will be motivated and prepared to share your story authentically and join a collective of passionate and strong leaders in agriculture."

The Livestock Collective was initially created by a passionate group of livestock supply chain people.

Led by managing director Holly Ludeman, the group filled the void of information about the live export industry which was in crisis at the time.

It was a brave move, and the industry which saw what had been created wanted more brave, respectful leaders within the red meat industry to be able to stand tall and talk passionately about their area of expertise in the supply chain.

The organisation has developed into a non-for-profit company with dedicated team members delivering projects in communication and leadership.

"For The Livestock Collective, it is much more than a two day workshop, it's a support program," Ms Nolan said.

"Our vision is linked to creating a community of leaders who are proactively and authentically sharing their story.

"Stories around animal welfare improvements, technology use and innovation, mental health, sustainable environmental management are important and essential for the community to hear about.

"The agricultural industry is not often equipped with the skills to communicate outside their circle.

"The community of Livestock Leaders that we are building is empowering, forward-thinking and change making.

"We are giving a group of passionate individuals the skills, support and opportunities to advocate for the livestock sector for years to come, and the success stories we are seeing from that is evidence that there is a story to tell and an audience who wants to hear it."

Ms Nolan said the program was consistently achieving 95 per cent or greater satisfaction and almost 100pc of attendees said they were very likely to recommend the workshop to others.

"This makes me confident that we are delivering what the industry needs," she said.

While COVID-19 caused some disruption the organisation has managed to adapt as needed and all presenters have now had a chance to present in person and virtually multiple times, making the transition more and more seamless as Livestock Leaders moves to every State and Territory in Australia.

Queensland alumni Georgia Glasson said she "did not really know what to expect from the workshop, as being quite introverted and not a confident speaker, advocacy is not something that I thought someone like me was ever capable of".

"After the workshop I walked away with some highly valuable new skills, and a new found confidence to speak the truths of my industry to the daunting world of social media, and to those who make assumptions about an industry that they know nothing about," Ms Glasson said.

South Australian alumni Jock Gosse said the workshop was an "incredible experience" and he "loved hearing from the Collective team members throughout the process, the amazing facilitators and most importantly my peers in the course".