The Freightos and Harpex indeces have both shown strong rises over the past year.

At TEM, we often report on the Baltic Dry Index (BDI) and its importance to shipping bulk commodities such as grain.

However, bulk is not the only way to move our goods.

Agricultural commodities, such as wool and reasonable quantities of grain, are also moved in boxes.

The last BDI updateshowed that levels were following seasonal trends and had risen after falling during the early stages of the COVID outbreak.

The container market, however, has been charting its own course.

The container market followed a similar pattern to lots of different commodities, with a collapse of levels in the first and second quarter of 2020.

Since then, the levels have gone into the stratosphere.

One of the attached charts show the Freightos global index and the Harpex index, providing a representation of container pricing.

The Freightos has only been in existence since 2016 and Harpex since 2001.

Both show strong rises during the past year.

In the case of the Harpex index, we see that levels have not quite reached the levels of the pre-Global Financial Crisis (GFC) boom in global trade. 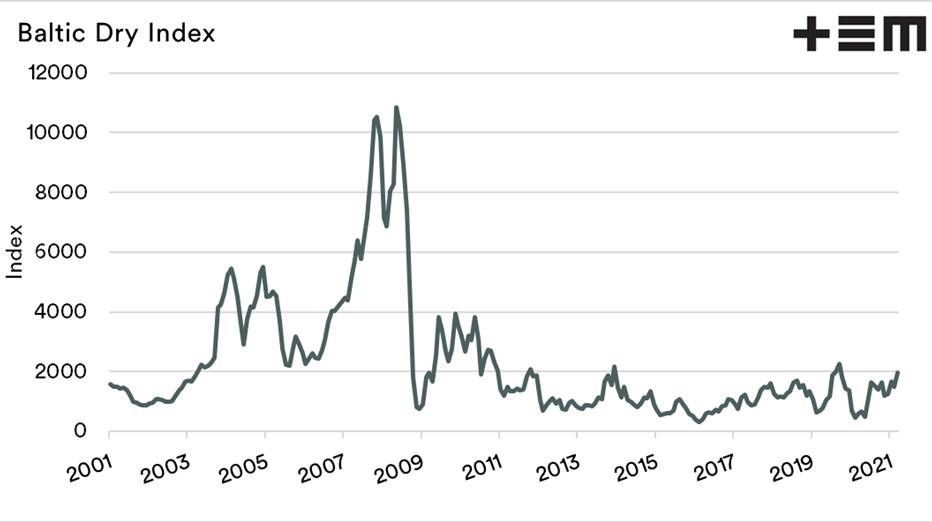 Container freight rates have increased significantly compared with bulk freight as measured by the Baltic Dry Index. This is challenging for traders using containers to move goods and grain.

Where is the rise?

Prices are different around the world.

The largest move in pricing has come from containers ex-China.

A large proportion of gadgets and gizmos come out of China and its economy has rebound quickly.

The rest of the world hasn't followed at quite the same pace.

Also, containers heading back to China have been raising a premium.

This is due to the demand to get containers back to a region where trade is moving intensely.

In recent weeks, the average speed of container ships around the world has increased dramatically.

During the depths of container prices last year, a container vessel's average speed dropped to 15.6-15.8 knots.

The reason for ships to slow down during periods of low demand and pricing is to conserve fuel and reduce costs.

At present, the speed of container ships has increased in line with the cost of containers as shipowners attempt to get to the next port and unloaded/loaded as quickly as possible.

So while containers are expensive, they'll be moving quick.

What does this all mean?

Firstly, it means that there are costs of moving items such as wool and smaller movements of grain/pulses.

The majority of grains in Australia are exported on bulk vessels, so the impact on grains is likely to be minimal and more focus on the bulk rates is required.

However, the cost of executing wool and meat is likely to be increased.

As most of our wool goes to China and then after processing to Europe, this will be felt.

At the same time, large quantities of meat will go in refrigerated containers to parts of Asia and the cost of freight will weigh heavy.

It is important to note however that freight costs from other origins will also be similarly increased.

Will it continue forever?

I went through the rise in shipping costs during the commodity boom.

During that period, the rise was unprecedented, and many thought it would never end.

This lead many to commission new vessels, which were left unutilised for years in the post GFC period.

I would say that this is more an issue of vessel and logistics positioning, causing spikes in the China route.

The relatively average rates evidence this in other routes such as from the US and EU.