Kalbarri was the worst affected town from TC Seroja, with an estimated 70 per cent of the town's buildings and houses damaged, of which 40pc are severely damaged including loss of property.

70% of Kalbarri's buildings were left damaged, of which 40% was severe

TYPICALLY a quiet, peaceful small coastal town which is popular with tourists, Kalbarri was left devastated by the effects of ex-tropical cyclone (TC) Seroja over the weekend.

It's unusual for a tropical cyclone to hit this far down the coast of WA, so the communities around Kalbarri and Northampton that were in the path, were not used to such conditions.

Not being built to a cyclone rating to withstand such harsh conditions, structures such as shops, hotels and community facilities were decimated.

Premier Mark McGowan said residents of Kalbarri and Northampton, as well as communities in the Mid West and northern Wheatbelt had experienced the most damage.

"The devastation caused is widespread and severe," Mr McGowan said.

He said the focus was now on the recovery effort.

Kalbarri was the worst-affected with 70 per cent of the town's buildings incurring some damage and of those, 40pc were categorised as having major damage including loss of property.

On Tuesday, thousands of properties were still without power, phone reception was patchy and four regional arterial roads remained closed.

At its worst Main Roads had 13 roads closed, most of those concentrated in the Mid West, Central Midlands and Northern Wheatbelt, as well as a big section of the Great Eastern Highway.

There was no flood damage to roads, with most closures being due to fallen trees and removing them was proving to be the biggest task for Main Roads in making the roads safe for travel again. 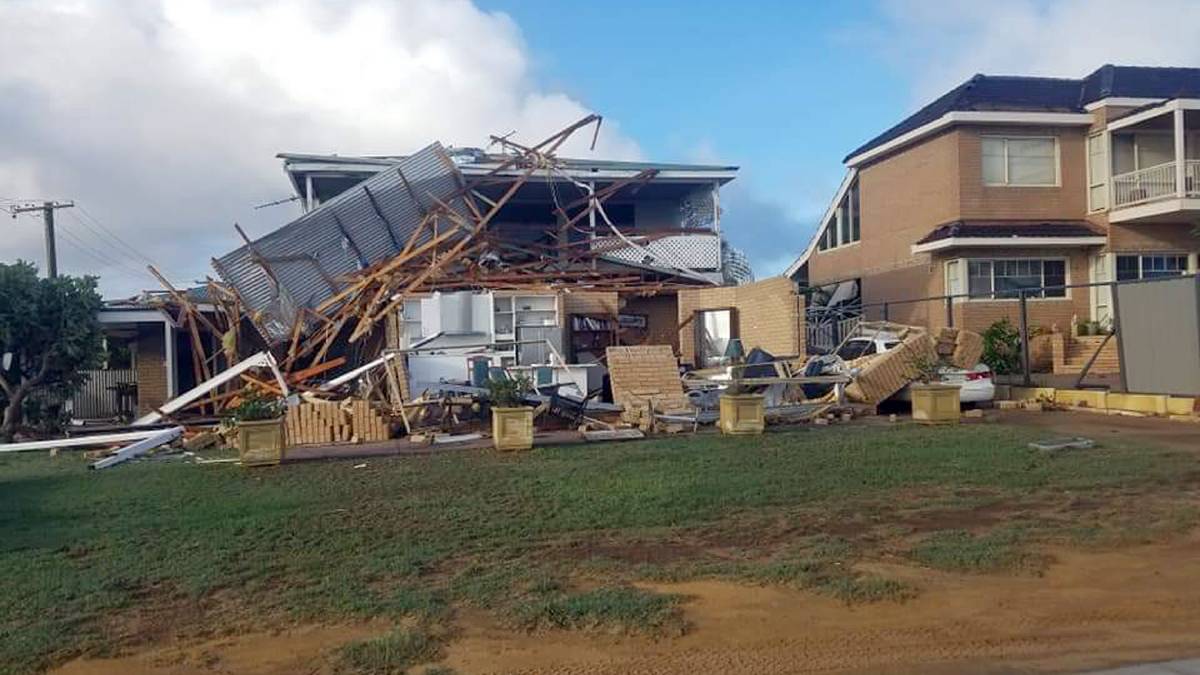 A house in Kalbarri destroyed, while the neighbouring property appears unscathed.

Mr Klem said it was too early to tell exactly the extent of the damage or the total damage cost.

"Some iconic landmarks have been damaged, such as Carnarvon's One Mile Jetty, Big River Ranch, the Northampton Hospital and Monkey Mia Resort," Mr Klem said.

"This cyclone was particularly challenging because it was in an area that is not built for these conditions (compared to the Pilbara or Kimberley which experience cyclones rather regularly).

"The angle at which it hit the coast, a steep angle, meant it affected a large areas of coastline, whereas cyclones up north tend to hit land at a perpendicular angle.

"Pilbara and Kimberley communities and structures are more resilient to cyclones."

The Bureau of Meteorology (BoM) said the fastest recorded wind speed was 170 kilometres per hour at 7.30pm Sunday near Kalbarri.

Gusts of 120-140km/h were observed at Geraldton, Northampton, Binnu, Chapman Valley and Mingenew.

The highest recorded rainfall was 166.8mm near Kalbarri.

According to BoM, the last time Geraldton experienced such intense winds from an unnamed tropical cyclone was in 1956, when a wind gust of 140km/hr was recorded.

Mr McGowan referred to tropical cyclone Alby of 1978 as being the most recent cyclone to cause significant damage similar to what Kalbarri endured, although the overall impact of Alby was far worse including the death of five people. 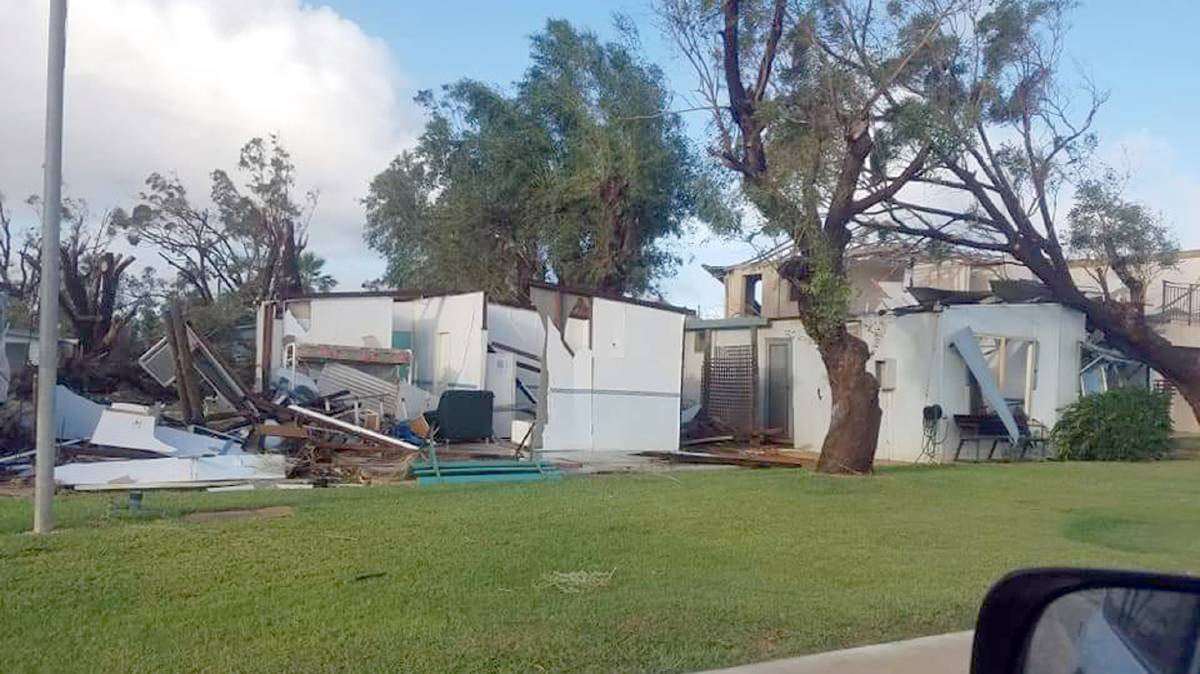 The strongest wind speeds recorded were 170 kilometres per hour near Kalbarri.

"Winds in Kalbarri and nearby areas from Severe Tropical Cyclone Seroja were likely to have been the strongest in more than 50 years," BoM said.

TC Seroja hit the WA mainland near Port Gregory at 8pm on Sunday as a severe category 3 cyclone.

It then moved in a south easterly direction towards Esperance.

The intensity of the cyclone decreased to a category 2 as it travelled over Dalwallinu and Nungarin and was then downgraded to a tropical low as it passed over Mount Hampton and then headed towards Esperance.

A BoM spokesperson said there were two main influences which led to TC Seroja's movement south out of the tropics.

"The Fuijiwhara Effect, or the interaction between tropical low 23U (briefly TC Odette) and TC Seroja, influenced TC Seroja to take a more southerly track," they said.

"Cyclones that form in April in the western region typically have a greater chance of moving south out of tropical regions." 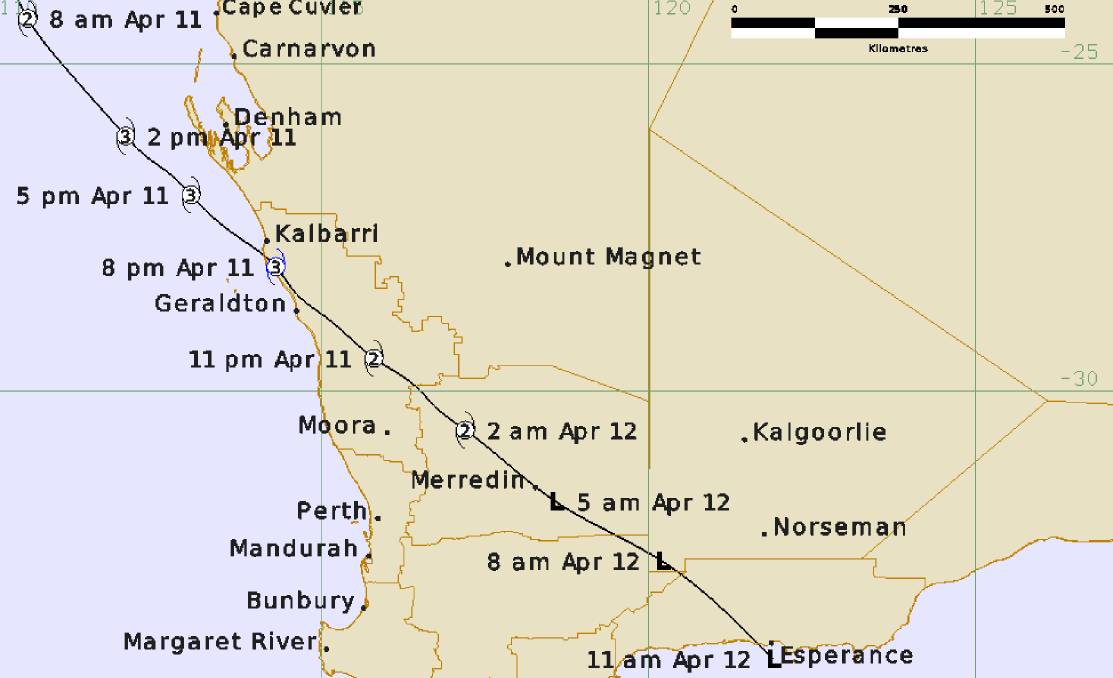 How the weather pattern tracked.

Additionally, very warm sea surface temperatures off WA's west coast persist in the region (associated with the La Nia of 2020-21), helping Seroja maintain its strength as it moved further south.

Companies have started to announce disaster relief packages, including Telstra.

Telstra residential and small business customers of the Mid West who were impacted can access short or long-term packages, which include mobile call diversion, a boost to data, free calls and reconnection support.

Mr McGowan asked insurance companies to be "generous and understanding during this time and quick with their responses".

Sponsored by
While international competitors may have been sidelined this year for the Quilton Australian Dunny Derby, competition remained as fierce as ever in the western Queensland town of Winton on Friday night.
Test
The CSIRO has launched a new mission to capture $10 billion in additional value from Australia's agrifood exports within a decade.
Test
A $50 million program to support microgrid pilot projects across regional Australia, announced in the 2020-21 federal budget, was launched by the Australian Renewable Energy Agency on Friday.
Test
Grain Producers Australia southern director Andrew Weidemann says higher than normal mice numbers in NSW reinforce the need for clear advice.
Test
Knowing exactly what type of bull they wanted, plus the determination to buy it, secured Iwona Partnership, based at Mitchell and Hannaford, the top priced bull at the seventh annual Meldon Park Simmental bull sale, held at its new Rolleston venue on Tuesday.
Test
The Buy From The Bush initiative is taking on a new challenge- finding the next big business idea to come out of rural Australia.
Test
Nerada produces approximately six per cent of black tea on the Australian market and credits its success to the Far North Queensland environment.
Test
Not too many businesses have handled the global pandemic that still has its grip upon the world like the red meat industry, according to Australian Country Choice CEO Anthony Lee.
Test