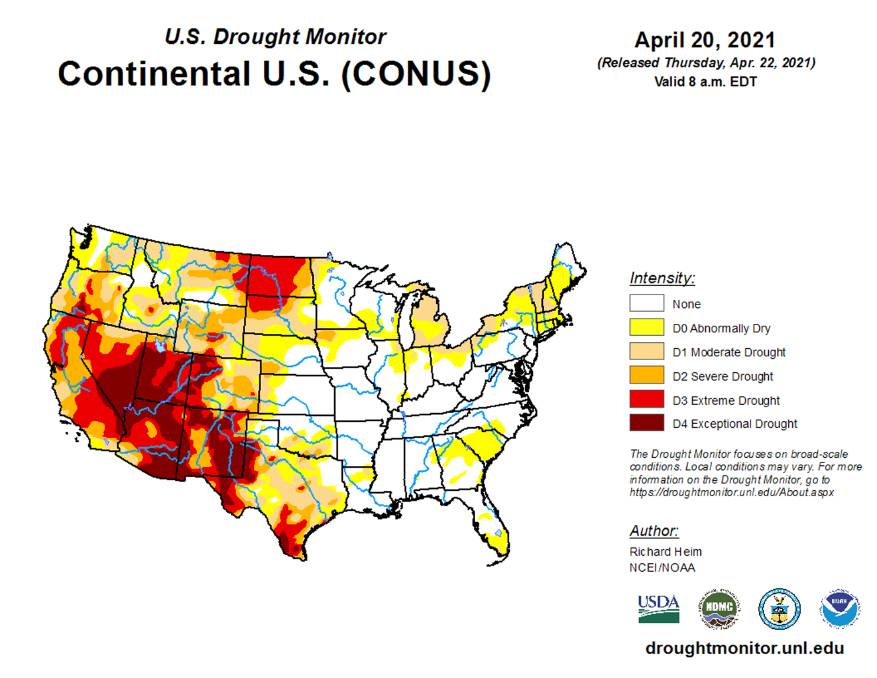 The soil moisture deficit across the United States corn belt could also spell trouble for the corn crop currently being planted.

The rally is due to a combination of factors with strong offshore futures driven by tightening global stocks and weather concerns in the northern hemisphere.

The past few weeks have seen life come back into wheat and canola markets with prices increasing in old and new crop markets alike.

Chicago Board of Trade (CBOT) grain futures rallied strongly last week with wheat gaining 58 US cent per bushel, corn up 64 USc/bu and soybean up 90 USc/bu for the week.

This rally is due to a combination of factors with strong offshore futures driven by tightening global stocks and weather concerns in the northern hemisphere.

The global weather situation at the moment is very hot and cold. Prolonged drought conditions in parts of the United States and the European Union have been punctuated by recent freezing events.

The United States Drought Monitor shows most of the United States south west is in extreme or exceptional drought which raises concerns that winter crops just out of dormancy have been damaged.

The soil moisture deficit across the United States corn belt could also spell trouble for the corn crop currently being planted.

United States corn stocks are already at their lowest in seven years and a poor production year for 2021/22 could have significant impacts on the global feed grain balance sheet.

When looking at what's happening in local prices, it is always helpful to understand what is happening on the global front.

Global feed grain demand remains robust with countrie having a heightened awareness of their own food security because of the impact COVID-19 had and continues to have on supply chains.

Chinese feed demand has been exceptionally strong with a combined 44 million tonnes of wheat, barley and corn estimated to be imported by China this marketing year according to the USDA.

Many industry analysts believe this will end up being much higher, with additional US corn exports already on the books.

Soybean imports into China are also predicted to be at record highs of 100 million tonnes.

This heightened demand is a product of reduced domestic stocks in China and the need to rebuild their pig herd as they continue to manage African swine fever outbreaks.

Domestic wheat prices in China are now trading below corn, making wheat the economical choice for pig and poultry producers.

The increased proportion of wheat in the feed rations has displaced two to seven per cent decrease in the amount of soymeal used across the country reported Reuters.

This is due to protein in wheat being higher than corn and consequently the reduced requirement for this protein from soymeal.

The change in the feed ration mix has started to put pressure on crush margins and as result the outlook is bearish for soybeans compared to alternative feeds.

However, the recent rally in Chicago soybean futures suggest that other factors like the slow soybean harvest in Argentina and tight US soybean stocks are ultimately supportive of global soybean prices.

The increased demand for feed wheat from China is a positive for Australia with close to 1.2mt of Australian wheat already exported to China this season and more on the books.

With the recent rally in prices, the rising Australian dollar, and the impending harvest of northern hemisphere crops, it will be interesting to see how long current values can be sustained.