The Trevor Keating Shearing Memorabilia Collection is now on public display for the first time, housed at the Hugh Manning Tractor and Machinery Museum, beside the recreation centre at Serpentine. 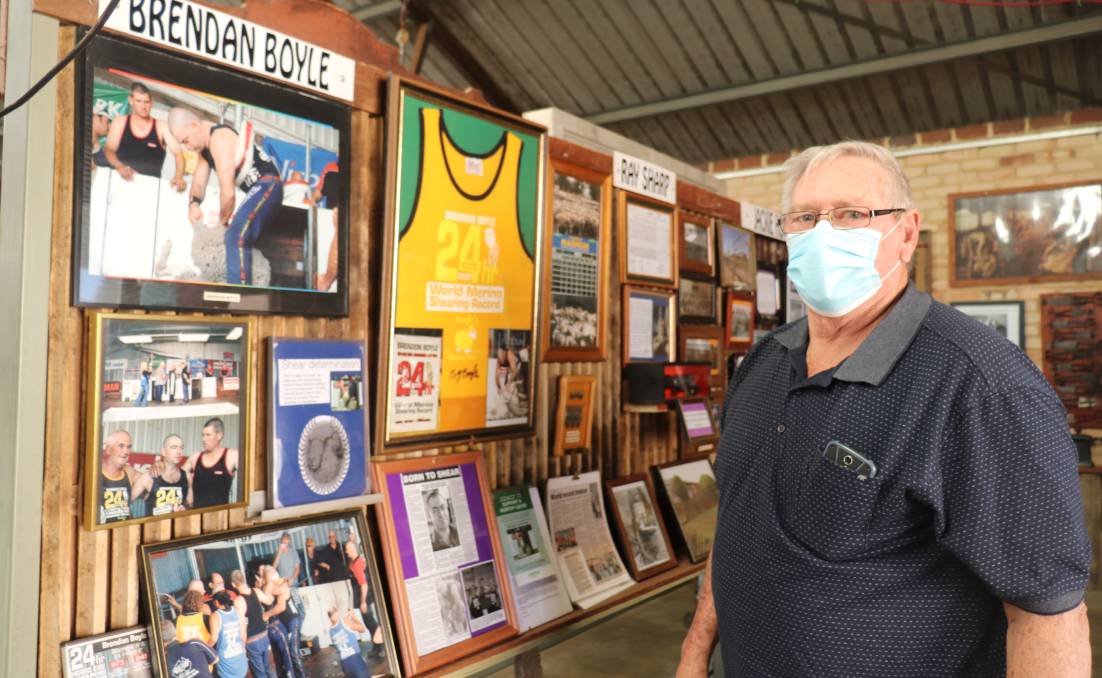 A PERMANENT home has finally been found for the most comprehensive collection of shearing industry history and memorabilia in Western Australia.

The Trevor Keating Shearing Memorabilia Collection is now on public display for the first time, housed at the Hugh Manning Tractor and Machinery Museum, beside the recreation centre at Serpentine.

Former shearers and rousabouts who went to the North West on trucks in the 1940s, 50s and 60s - the oldest Gil Carter at 98 - their families, current shearers and interested woolgrowers made up a crowd of about 120 people who packed the museum on Sunday morning for the official public opening of the collection.

As its name implies, the collection is the work of lifetime shearer and vice president of the Shearers and Pastoral Workers Social Club (SAPWSC), Trevor 'Golly' Keating, 69, of Jumbuck Shearing.

Mr Keating told Sunday's gathering his own experiences as one of the youngest surviving shearers to have gone to the North West on trucks and a determination to keep that history "alive" after he attended his first annual SAPWSC reunion, was what had inspired him to start the collection.

He grew up on a New South Wales dairy farm and relocated to Perth in 1968 on a whim with an uncle five years older, who had a car.

He found a job on a Boyup Brook farm where a son of the family was a shearer who came home at weekends and regaled him with shearing stories.

"I thought it (shearing) sounded like a pretty good life," Mr Keating said.

"I decided I was going to go north on the shearing trucks and they got me a job as a rousabout.

"I ended up in St Georges Terrace outside the Ozone Hotel and climbed aboard the Giles and Galloway truck and we headed up to the Murchison.

"These old shearing trucks had a wooden seat straight down the back and there might have been 20 blokes sitting back to back and away they went.

"They (trucks) were known as ring pounders for obvious reasons - it was all dirt roads (the bitumen ended at Northampton on Brand Highway and 40 kilometres north of Wubin on Great Northern Highway in 1969).

"We did three or four sheds in the Murchison, then up to Port Hedland and did Wallal Downs on the coast and from there we jumped across to Marble Bar.

"I did two years up there as a rousabout and another year as a learner shearer.

"That was the start of my passion for the North West and the shearing industry."

After the trucks stopped going north in the early 1970s, as stations moved out of sheep into cattle to combat wild dog predation and the mining industry began to take off in the Pilbara, Mr Keating was shearing at Kojonup where he had several runs for 12 years.

The catalyst for starting the collection was meeting old shearers who had also gone to the North West, at an annual SAPWSC reunion at the Ravenswood Hotel.

"After that first reunion and seeing all these old fellows there and the mateship still alive like it was in the north, I was very emotional," Mr Keating said.

"I said something has got to be done about preserving this history - it has to be kept alive.

"So I started to accumulate a little bit of gear.

"I was lucky enough to find a photographer in Perth who had been to the north and he had a lot of black and white photos and it started from there.

Mr Keating said most of the collection came together over 11 years.

"I had it housed up in Jarrahdale for many years on a property where I live and I have to thank (local farmer) Jan Starr for putting up with me taking over one of her sheds and using it to store my collection," he said.

Mr Keating said he was very relieved and grateful to the Hugh Manning Tractor and Machinery Museum for housing and displaying his collection.

He said he had spent many years trying to find a permanent home for it and had been afraid it might have to be broken up.

"I'd like to do stories on every one of these old shearers here today - they'd have some stories you wouldn't believe - because it was a different era to the modern shearer, we were away from home for eight-10 months of the year.

"You'd cut out a shed after three weeks or a month and then be back on the ring pounder and away to the next shed.

"It was a male environment, though sometimes you would have a woman cook.

"WA is the only place in the world where shearers travelled those distances on trucks.

"When the price of wool took off in the 1950s, stations like Liveringa and Noonkanbah in the Kimberley, each were running 100,000 sheep, but there were no shearers in the North West.

"The mateship and camaraderie was fantastic and it still is."

SAPWSC president Doug Kennedy - the middle of three generations of a shearing contractor family spanning 56 years in the industry and featured in the collection - told the opening ceremony it was "the only shearing memorabilia collection in WA open to the public and it would be the most comprehensive".

The SAPWSC presented the Hugh Manning Tractor and Machinery Museum with a $500 donation at the collection opening.

- While the Trevor Keating Shearing Memorabilia Collection features the truck days, it also comprehensively covers every aspect of the WA industry, from blade shearing, to belt-drive overhead equipment to electric gear, narrow combs to wide combs, shearing records and record holders from Jackie Howe on.

It includes examples of the equipment used, the history of shearing identities like 'the mad eight' - a legendary team in the 1920s - through to 2007 world 24-hour Merino shearing record holder Brendon Boyle.

There are equipment catalogues featuring names like Lister, Moffat Virtue, Sunbeam, Cooper and Wolseley, station ledgers showing shearer tallies, what they were paid and copies of the union agreements they worked under.