Getting more lambs on the ground is a key aim for the Woodard family in SA. ON OFFER: Woolumbool stud will be offering 300 rams at its on-property sale in 2021. 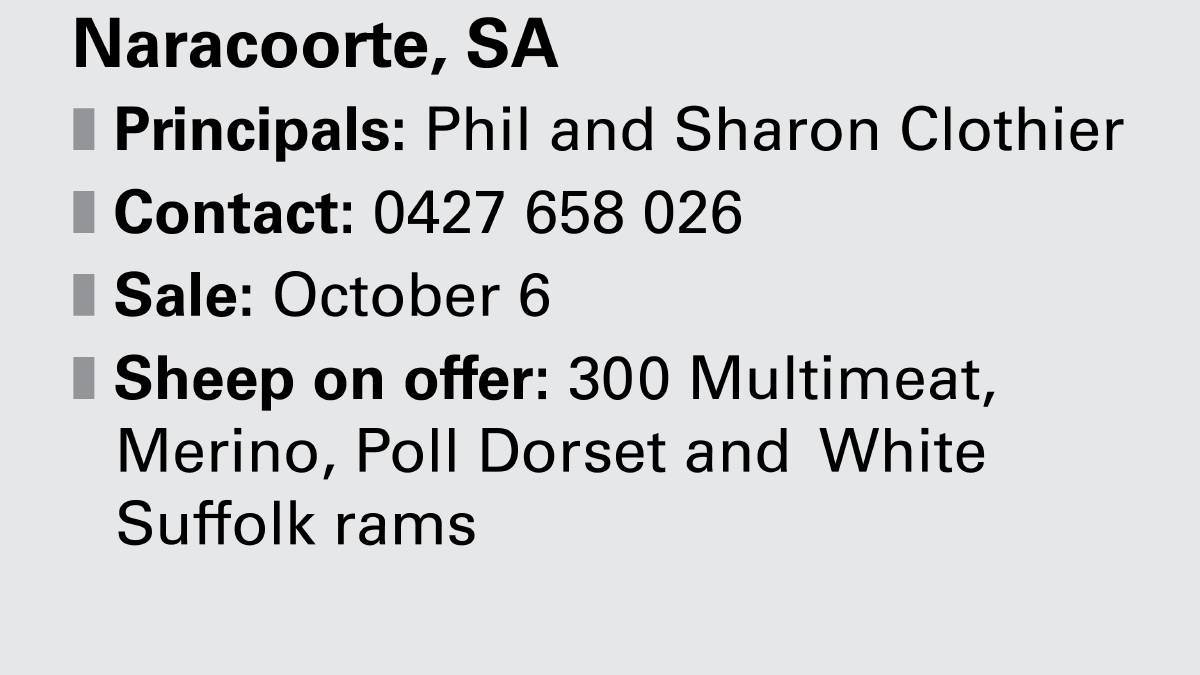 Managing and continually improving a high performance sheepmeat flock requires paying close attention to year-round animal nutrition, paddock feed available and advances in research in both of these fields.

By focusing on these key factors, the Woodard family at Joanna, near Naracoorte in South Australia, has been pushing lambing percentages close to 200 per cent in its multimeat composite sheep.

They source genetics from Phil Clothier's nearby Woolumbool Multimeat, Merino, Poll Dorset and White Suffolk stud, based at Naracoorte.

The Woodards decided to start producing multimeat sheep after noting the impressive lambing percentages - of up to 200 per cent - that were being achieved in trials and on commercial properties with this composite breed.

"We aim to get as many lambs on the ground as possible to optimise our gross margin per hectare, and this is best achieved by ewes producing multiple lambs," Todd Woodard said.

"Our multimeat flock regularly achieves 190-200 per cent foetuses at scanning, and we are making every effort - and conducting further research - into making sure these are lambed-down and weaned."

The property is in a medium rainfall zone that receives about 520 millimetres of rain annually.

A third of the sheep flock is mated to Woolumbool multimeats and produces lambs with one copy of the Booroola gene.

The second ewe mob is mated to Woolumbool White Suffolks to "dilute" this gene, and a third mob is re-mated back to the multimeat rams.

"Our overall target is to have higher lamb numbers from multiple conceptions and the ideal is twins," Mr Woodard said.

"But we are also closely involved in research into boosting survival and growth of triplets through ewe nutrition, condition scoring and pasture management."

At scanning this year, the Woodards' ewes carrying progeny with the single-Booroola gene had an average conception/foetus rate of 190 per cent, compared to its other crossbred flocks at an average of 160 per cent (of ewes mated).

"Realising this potential through to birthing and weaning rates is obviously our biggest challenge and requires very careful ewe management," Mr Woodard said.

"There are higher mortalities associated with multiples.

"But the industry is addressing this, and we think we are at the forefront of this effort.

"General losses in our flock from foetus to birth can be 10-12 per cent and the multimeats can be slightly higher at about 15-17 per cent on average."

To reduce this rate of loss, the Woodards scan all ewes and separate mobs according to the number of foetuses - singles, twins or triplets - for preferential nutrition management - based on regular ewe condition scoring.

Our overall target is to have higher lamb numbers from multiple conceptions and the ideal is twins. - SA grazier Todd Woodard

The main strategy is paddock selection, based on available feed, and supplementary feeding ewes up to lambing - as needed - to meet animal requirements.

"We have a close handle on the nutritional requirements of the ewe at each stage of pregnancy, lactation and weaning - and during the remainder of the year - and make sure we continually fine-tune their feeding regime," Mr Woodard said.

"A high performance sheep flock needs fuel and we have to unsure it gets this.

"We have shifted away from traditional granular fertilisers and manage our pastures with sheep rotations and some foliar products.

"Time of lambing is also crucial here and we aim for mid-winter, with weaning in about November."

If there are good spring rains, about a third of the top-performing lambs are retained for the slaughter market and grown-out to carcase weights of 20-21 kilograms/head.

But, typically, the progeny not being retained as breeders are sold as store lambs to feedlots or croppers seeking to put sheep on their stubbles.

Mr Woodard said the overall objective for the business was to continue improving foetus survival rates and keep losses to a minimum through constant ewe condition scoring and grazing rotations to ensure the flock received all the nutrition it needed.