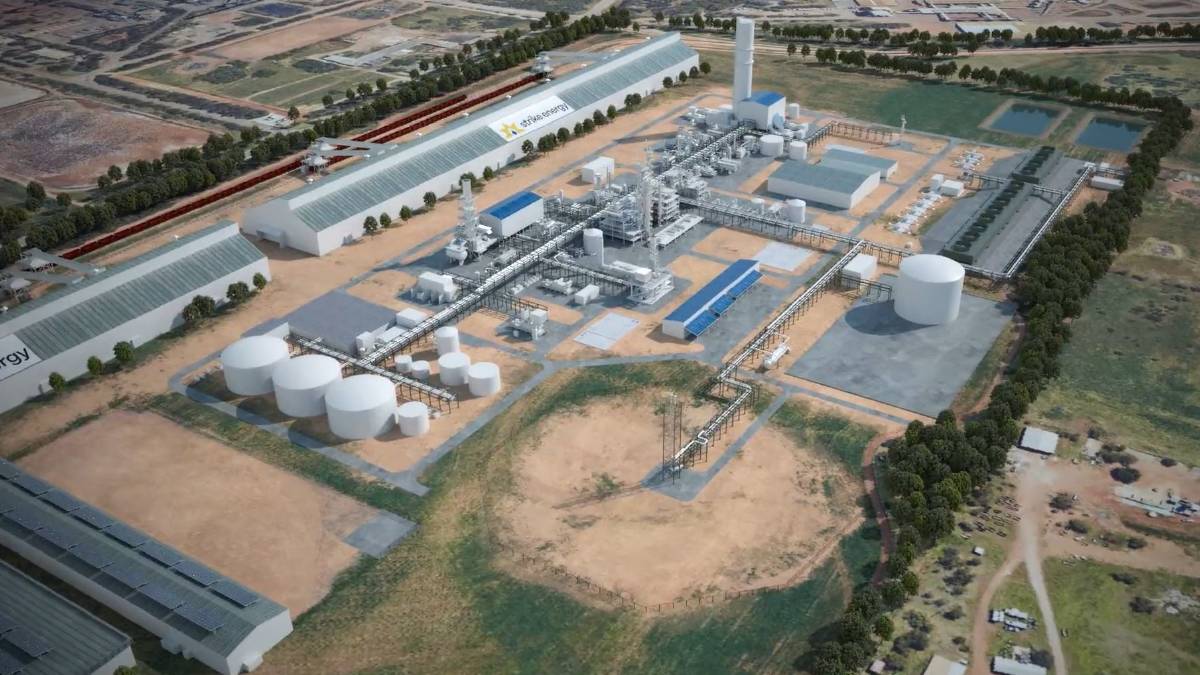 An artist's impression of Strike Energy's proposed urea fertiliser plant in a Geraldton industrial estate. It proposes to use natural gas from its gas wells 120 kilometres to the south to produce urea.

INITIAL expressions of interest to buy urea fertiliser proposed to be produced in Geraldton have exceeded estimated production capacity by more than two and a half times.

Strike Energy on Friday told the Australian Securities Exchange (ASX) it has received expressions of interest for Australian and international sales of urea totalling more than 3.5 million tonnes per annum.

This is 267 per cent of its proposed manufacturing plant's planned 1.4mtpa capacity, Strike told the ASX.

It said it will now work to convert this interest into binding long-term offtake agreements for its fertiliser.

It said it intends to "formally commence marketing equity in Project Haber" in the fourth quarter this year.

As previously reported in Farm Weekly, Strike intends to pipe natural gas from its South Erregulla gas wells near Arrowsmith 120 kilometres north to the Narngulu Industrial Estate at Geraldton.

Strike told the ASX it had entered into a co-operation agreement with Mid West Ports Authority which operates Geraldton port.

Under the agreement, Strike said, it and the port authority would jointly investigate how urea fertiliser surplus-to-local-requirements may be handled and shipped from the port.

This work will form the basis for future negotiations on a port access and service agreement.

Strike said it planned to capitalise on seasonal opportunities by selling excess urea fertiliser that was not sold locally, in the Eastern States and potentially Asian fertiliser markets.

"Use of adjacent Geraldton port, which currently imports significant quantities of fertiliser products, will be critical in ensuring Project Haber has a reliable and low-cost supply chain for consistent urea deliveries," Strike said.

It said it also had a non-binding memorandum of understanding (MoU) with Australian Gas Infrastructure Group (AGIG), one of Australia's biggest energy providers and owner of the Dampier-Bunbury gas pipeline, to source eight gigalitres per day of water from its proposed Mid West desalination plant.

A significant supply of fresh water "is critical to the industrial urea manufacturing process" and under the MoU, water supply was earmarked to start in 2025, Strike said.

Its urea fertiliser project would be a "foundation customer" for the desalination project, which could help that proposal come to fruition, Strike pointed out.

It said meetings with relevant State government agencies were planned in coming weeks to discuss the urea project and its benefits to WA agriculture and potential environmental importance to the State.

The project is expected to be referred to the WA Environmental Protection Authority for assessment late this year and baseline studies and "reconnaissance" flora and fauna surveys at the Geraldton site and scoping of required technical studies has begun with consultants Strategan-JBS&G and Strike's engineering partner Technip Energies Australia.

"This net benefit to the agricultural industry and WA's existing urea carbon footprint is expected to be a major driver for positive positioning of the project during the environmental approvals process," it told the ASX last week.

It said Technip Energies was working on pre-FEED (front-end engineering design) development and a report and updated cost estimate is expected to be finalised by the end of August, which will provide some indication of the commercial viability of the project.

Strike has said the development of Project Haber was contingent on the proving up of sufficient gas reserves at South Erregulla.

The funds raised will enable completion of an indicated mineral resource estimate and scoping study for the SoP fertiliser project.

"This is an exciting time for Trigg Mining, with trenching programs at Lake Throssell underway to support the upgrade of the existing inferred resource estimate to indicated status," said Trigg managing director Keren Paterson.