The potential is there this year for a record breaking crop, especially given the striking similarities to the 2016 season which produced a record total grain tonnage of just over 18mt. 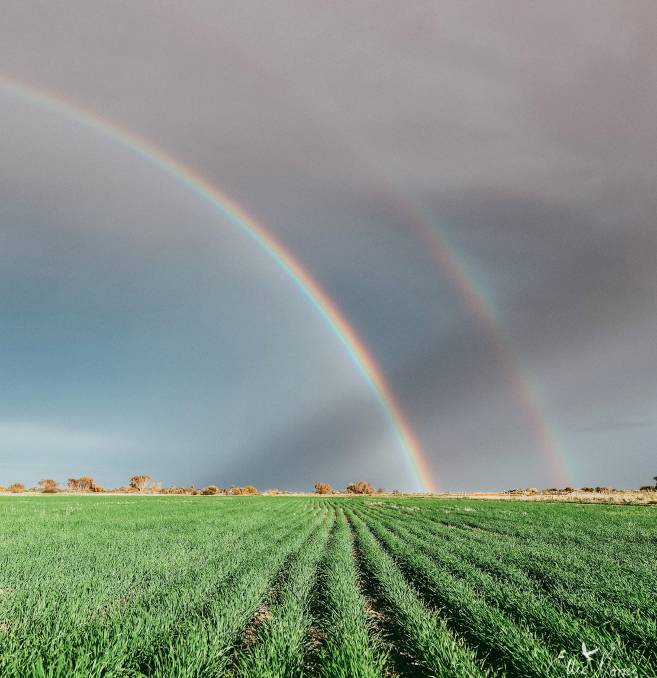 The start to the 2021 grain growing season has been nothing short of exceptional for the majority of the grainbelt. Many crops around the State look as good as this barley, sown on May 3, did after even more rain last week. Photo by Ellie Morris, Perenjori.

WHILE it is still early days, a near perfect start to the growing season has set Western Australia up for above average grain yields, with some estimates hitting the 20 million tonne mark.

It is a stark contrast to the beginning of the 2020 season, which at this time last year Farm Weekly reported had been "patchy across the State and rainfall to date has been light or intermittent".

The potential is there this year for a record breaking crop, especially given the striking similarities to the 2016 season which produced a record total grain tonnage of just over 18mt.

According to the Grain Industry Association of WA's (GIWA) June Crop Report, the good early rains experienced so far have driven the total crop area up by nearly five per cent compared to 2020, which was previously a record area of crop sown in WA.

Crop report author Michael Lamond said in 2016 there were very good reserves of subsoil moisture in all regions except the top half of the Geraldton port zone, which is also the case this year.

"The 2016 growing season got off to an early start and early crop growth was excellent, again, the same conditions for the start of the 2021 growing season," Mr Lamond said.

If there is an average growing season going forward, Mr Lamond said the extra area of crop sown has the potential to push total grain production past 20mt.

"On the downside, waterlogging is starting to show up in the south, which also pulled crop grain yields back in 2016, and of course there is the risk of frost in the spring," he said.

"In 2016, there were several severe frost events which shaved about 2mt of grain from the total in 2016." Good early rains experienced so far have driven the total crop area for 2021 up by nearly five per cent compared to 2020, which was previously a record area of crop sown in WA. Photo by Kogody Farming

In the Geraldton zone, weed control and nitrogen applications have both begun early.

Despite the positive start, growers in the region are still cautious given the expected conditions from early June when rainfall is forecast to be lighter.

Mr Lamond said overall, about 10pc more crop area has been put in this year in the zone, mainly on the heavier soils in the low rainfall regions to the east.

"Extra paddocks have been allocated to what is the biggest canola crop ever seen up further north and with 20pc of canola flowering, those in on good soils are going 'gangbusters'," he said.

"While the sown lupin area is small, what is planted has had excellent establishment and some extra barley has gone in as predicted.

"Many are finding it is hard to get hands on nitrogen which has been going out more rapidly than what suppliers and trucks can keep up with."

A few drier areas of the Kwinana North Midlands zone where crops had not germinated a few weeks ago, are now either up or emerging and for the majority of the region, the crops are in excellent shape for this time of the year.

Cereals are anything from five leaf to just emerging and all very clean from weeds, while canola is good to very good with some crops just starting to flower and the small lupin area has had an excellent establishment.

For growers in the eastern and north-eastern fringes of the Kwinana North East zone, it has been the best start for many years and there has been a large increase in the area of wheat planted in the low rainfall areas north of Merredin and further north and east of the zone.

The summer rain has been more widespread in the region than it was in 2020 and growers that have had a few tough years have been able to plant early into moisture.

For Kwinana South, crop growth is good to excellent for most of the region except for a small area along the Great Eastern Highway that keeps missing out on the rain.

"Crops that were sown in April and early May have been pushed along by the warm growing conditions and are ahead of where they would normally be at this time of the year," Mr Lamond said.

"Whilst this means more frost risk it also means less exposure to heat shock in the spring - heat shock is an annual event and even though frost can have a devastating impact on grain fill, it is more of an intermittent event.

"The wide range in growth stages from a strung-out planting period into moisture, means less of the WA grain crop will be exposed to frost at any one point in time."

Around 10pc of sown crops in the Albany West area will see some re-sowing following waterlogging, but the consensus is that the forecast is looking good, as a low-rainfall forecast is currently a good forecast with many areas now under water and out of action.

Canola is up significantly by about 10pc, while lupins have been culled by half with many silos still full of seed that was intended for this year's planting.

What lupins have been sown are experiencing waterlogging and root rot in some paddocks, plus over the last few weeks, there has been a lot of early seedling blackleg in canola and some paddocks have lost about 40 to 50pc of plant numbers.

Growers in Albany South are a long way in front of where they usually are, though many have not finished seeding and a few intended crop paddocks will probably be left out now from becoming too wet to sow.

Trying to get Nitrogen has been difficult, and there are just not enough trucks to go around.

The supply chain is a looming problem in this sense, and this season is really highlighting the issue largely caused by a change in growers' buying patterns.

All crops are looking good to very good in the Albany East Lakes region, but rainfall has been a little variable across the zone with a few pockets receiving less rain than others.

Generally, plant establishment is excellent with the early canola starting to flower and lupins starting to bud.

Growers in Esperance are not complaining and it is hard to remember the last time a start this good took place in the region.

Mr Lamond said about 90 to 100mm had been received so far for the winter on top of the summer rain for most areas of the zone.

"There are not too many wet spots that have been causing the trafficability issues seen in other southern zones," he said.

"Very early barley is up and close to first node, which is stressful for those managing it, especially considering fungicide is becoming difficult to order in.

"Nitrogen, which is now being poured onto canola, also has many scrambling to get their hands on as much as possible."

Overall, growers across the State are already actively planning for a large harvest with the knowledge that if the current staff shortages continue there will be added pressure on an already stretched supply chain.

While there are still challenges ahead and the grain is a long way from the bin, it is difficult not to be quietly optimistic about how the 2021 growing season will pan out.