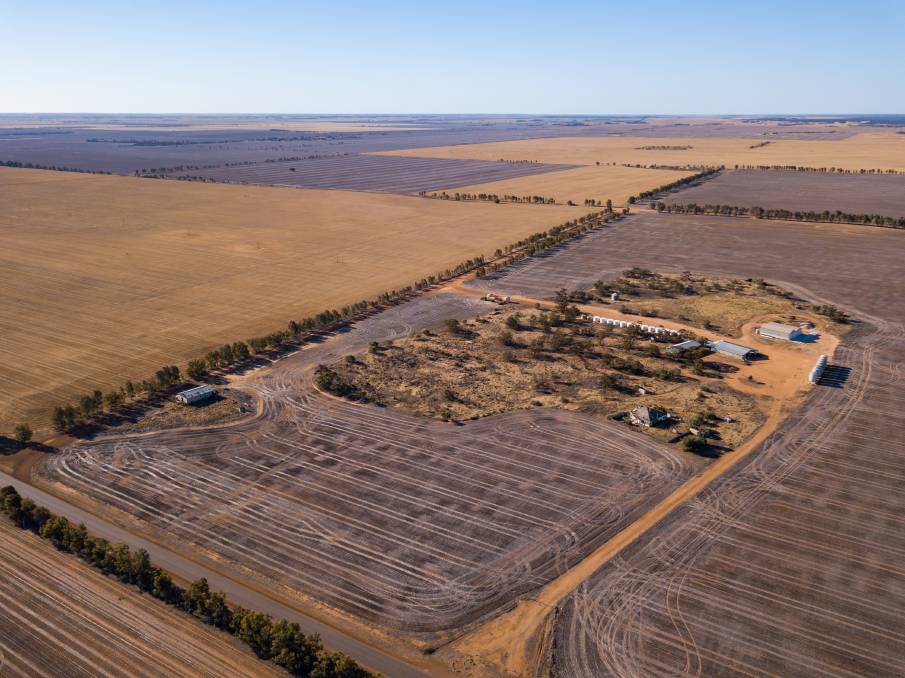 Gurrady Farms, now known as Yoona Springs, at Yuna, has been purchased by Warakirri Cropping for about $30 million. Photo by Nutrien Real Estate Bunbury.

The property was owned by the Pawelski family who had been on the property for 59 years and in that time it developed a reputation for being a top producing farm for the area.

WARAKIRRI Cropping has expanded its Western Australian foothold with the purchase of a quality grain producing property Gurrady Farms at Yuna.

The property was owned by the Pawelski family who had been on the property for 59 years and in that time it developed a reputation for being a top producing farm for the area.

The sale was handled by the brothers and Nutrien Real Estate Bunbury sales specialists Ben and Daniel Lloyd-Smith.

Both the agents and buyer declined to comment on the price, but Mr Lloyd-Smith believed a record or near-record price for the region was achieved.

Warakirri Cropping is an Australian company managed by Warakirri Asset Management, which is backed by Canadian pension fund, The Public Sector Pension Investment Board (PSP Investments).

Approval by the Foreign Investment Review Board was required for the sale.

Warakirri Cropping has renamed the Gurrady Farms property as Yoona Springs, which comprises 9408 arable hectares, spread across five non-contiguous blocks that are within 35 kilometres of each other.

"Warakirri Cropping has a national diversification strategy to increase risk-adjusted returns and the northern wheat zone of WA has been a priority region given its low correlation to the remainder of our portfolio," Mr Goonan said.

"Yoona Springs is an investment grade asset, with scale and a good balance of high performing soil types."

Like its various other broadacre properties, two of which are in WA - Mawarra, Merredin, of about 23,000ha and Lobethal, Beaumont of 13,600ha - Warakirri Cropping will operate the property itself.

"We look forward to settling into the district and engaging with - and contributing to - the local community."

"We had interest locally, from interstate and internationally."

The Lloyd-Smiths received enquiries from parties from or backed by seven different countries, including the United States, Switzerland, Japan, Malaysia and others.

There was no interest from Chinese buyers.

Mr Lloyd-Smith said there was a great deal of focus in allowing as many potential buyers as possible the chance to enquire about the property.

"Quite often farms have been sold quietly over the fence with only one buyer given the chance and others missing out," he said.

"So that was something we wanted to aim to avoid and we did so by offering it to everyone who we thought could possibly be interested in purchasing it and that's how a premium price was obtained.

"There's a lot of frustrated people that haven't been given the chance to buy a property that they would have liked to buy or at least put an offer in."

Among the local interest was a syndicate of family farmers.

Mr Lloyd-Smith estimated that 90 per cent of people from the region made contact to enquire about the property.

"I think once people saw the yields that the family was achieving, people were very interested, because it can be a marginal area," he said.

"The family was there for 59 years, had their own way of farming that was probably a little different to the majority of people in the area and although there's no fine science in farming, what they were doing was working for them.

"Some of the common feedback is that the family must have a crystal ball because they would often leave crops out when others would be all in and then it would pay off for them.

"I would say it was one of the higher yielding farms in that section of Yuna."

Along with its productivity, another key feature of the farm was that it encircled the local grain receival site.

"In terms of trucking back and forth, the time and distance to travel was very minimal and for a property of that size, the dollars add up very quickly," Mr Lloyd-Smith.

"The property had great soils and fertiliser practices were right up to scratch.

"When the property was brought to market, it was roughly 70pc fallowed, so it had been really set up for the following season."

Erregulla Farms was the most recently purchased of the three properties, which resulted in a most valuable broadacre farm sale in WA history, of $97.62m walk-in, walkout.

"Warakirri has owned and operated agricultural assets for more than 25 years, managing more than 200,000ha of Australian agricultural land with assets across the country, as well as running diversified buy and lease strategies on behalf of both offshore and domestic investors."