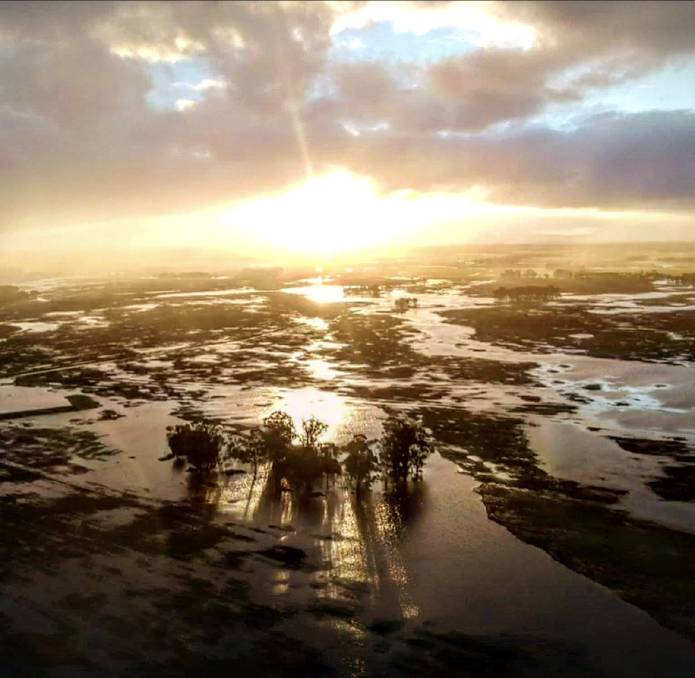 Green Range farmer Jeremy Walker used a drone to take this picture of his farm immediately after a recent extreme rainfall event. Under the water is much of this season's canola crop and a paddock of oats.

SOUTH Coast farmers in the Albany port zone are this week tallying up the likely cost of trying to save crops inundated by a recent extreme rainfall event and subsequent showers.

Some farmers had not completed this year's seeding program because of a wet season so far along the South Coast, but now they are having to contemplate going back into paddocks they had done - when they eventually dry out - to reseed areas where the seed was either washed away or too wet to germinate.

The weather event last Sunday week dumped up to 110 millimetres of rain between Albany and Denmark, closing the South Coast Highway and Lower Denmark Road until washaways could be repaired and flood waters drowned an estimated 150 pregnant ewes on a property west of Albany.

But, according to local farmers and agronomists, longer-term damage to cereal crops was caused by more than 50mm of rain that day across the southern half of the Albany port zone - from the Stirling Ranges south in a band through Wellstead and on towards Bremer Bay.

Green Range cropping and sheep farmer, 70 kilometres north-east of Albany, Jeremy Walker posted a drone photograph of his inundated canola and oats paddocks on Twitter on the Sunday evening with the wry comment "Who left the tap on?"

This week Mr Walker estimated he had lost 30-40 per cent of his canola and was unsure how much of his barley and oats crops he could save.

"Because of the good start to the season we got stuck into it (an 1100 hectare seeding program based mainly on canola) early so it was pretty much up and going," he said.

"That downpour was the final nail in the coffin for us.

"We've been battling wet issues for at least a month - our soil profile was full even before the big one.

"We'd already resown one oats paddock probably four times because we had a (seed) bursting problem because it's so wet.

"There will be some paddocks we will probably have to quit on and what we do reseed - I'd be thinking August before we put anything else in the ground - we won't be expecting much of a crop from this year, given it is planted so late and so wet.

"It's all looking pretty sad and like it could use some nitrogen, but it's too wet to get onto paddocks - we've had a couple of goes and all we do is pug it up.

"We also have to manage it pretty carefully - if we put nitrogen on when it's too wet, or it gets rained on again, you lose most of it, so you have to weigh up pretty carefully whether and when you throw more money at it."

Mr Walker said his farm was flat so surface water drained slowly into a swamp, but neighbouring properties with more slope had suffered erosion issues.

"One of my neighbours has got a new gully that looks about three times as deep as his car and I know there's a lot of properties with erosion damage around here," he said.

"Most of the surface water has drained away now - there's still parts of some paddocks the sheep can't get to - but the problem for us is that it's winter and we are now getting our normal South Coast winter rains.

"That's on top of what we got from the big one, when what we really need now is a drier than normal winter."

The latest extreme weather event took rainfall totals so far this year along the south coast to over 500mm and to more than 450mm further inland, Mr Bee said.

"I've got guys who haven't finished seeding yet and they are already trying to work out which areas they will have to go back and reseed once it dries out a bit," he said.

"Some of the crops were already a bit patchy because of waterlogging from earlier rains, but now the soils are saturated and every little drop of rain we get is keeping them that way - the profile is full.

"There will be a percentage of paddocks that don't recover from this.

"The cereals are probably handling it a bit better than the canola, but it's marginal.

"The problem farmers have is they can't get onto the paddocks to do anything until they dry out.

"Those that are on pasture will probably be alright, but the croppers have taken a hit and some of the crops are looking pretty poor at this stage.

"But even if they could get onto paddocks, putting nitrogen on when the soil is this wet is just a waste of money - there's some planes (crop spraying) in the air, but it's too wet to put nitrogen on just yet.

"Farmers are telling me it's the wettest it's been since 2005.

"The contrast with this time last year - when it was blowing dust and many farmers were still waiting for a double-digit rain event - is massive.

"What we need now is some sunshine and wind to dry everything out."

The northern half of the Albany port zone did not receive the extreme rains.

Nutrien's Kojonup-Katanning agronomist Kent Stone said most of his local area had received up to 36mm of rain during the weather event, but it was not enough to have caused significant damage.

"We didn't get as much (rain) west of Kojonup so I'd say crop damage would be maybe five per cent from waterlogging," Mr Stone said.

"But I did drive to Albany on the Monday last week (the day after the weather event) and from Narrikup heading south it was stupidly wet," he said.

Stirlings to Coast Farmers chief executive officer Nathan Dovey said many members' farms had been "underwater", with the cropping area towards Wellstead seemingly wetter than Manypeaks closer to the coast which he said was "unusual".

"There's still a long way to go yet in the season."

CBH Group is understood to be assessing what impact the extremely wet weather in the southern part of Albany port zone is likely to have on this season's harvest in the zone, but was unable to comment when Farm Weekly went to press.