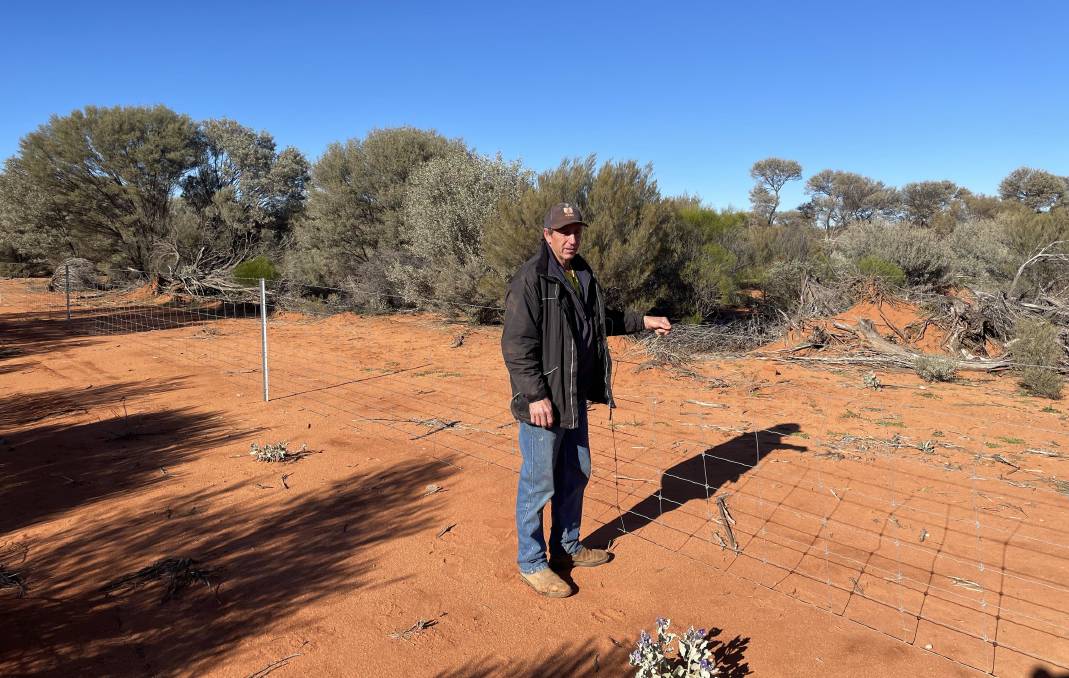 Pastoralist and now carbon farmer David McQuie, of Bulga Downs station, near Sandstone, has become one of the first in WA to create and sell carbon credits, and generated a strong profit.

Despite sacrificing about $250,000 of income a year from cattle in reducing stocking numbers, pastoralists David and Victoria McQuie have made about $1 million a year from selling carbon credits (profit of about $750,000 a year), while at the same time improving their land.

BULGA Downs station, near Sandstone, has become one of the first Western Australian privately-owned pastoral properties to create and sell carbon credits.

Despite sacrificing about $250,000 of income a year from cattle in reducing stocking numbers, pastoralists David and Victoria McQuie have made about $1 million a year from selling carbon credits (profit of about $750,000 a year), while at the same time improving their land.

They started a human induced regeneration (HIR) project on their 700,000 hectare property about two and half years ago in partnership with the natural capital advisory and management company, RegenCo.

Mr McQuie said he had operated the station with regenerative management practices for the past 30 years, so undertaking a carbon project seemed like "the next logical step".

The Bulga Downs HIR project will run for 25 years and is expected to generate an estimated $36m in carbon credit sales.

Previously their regeneration was based around trial and error, observations and photo evidence, whereas now with the project and assistance from RegenCo, decisions are based on scientific evidence.

"On the management side we have reduced our stocking numbers in pretty much all areas, not just the carbon areas," Mr McQuie said.

"The cattle spend less time in the sweet country because the makeup of the feed structure in our country has plenty of protein, but we don't have a lot of energy and we need energy to feed the bacteria, which can then break the protein down.

"So, by looking after the high energy country, we required less of it to use the protein."

"We also closed some areas down, looking at where roads go to try and slow the velocity of water and give it more time on the surface and therefore more time to soak in, and generally trying to get a continual increase in ground coverage on the rolling front.

"We monitor this all fairly closely."

In high energy country, they reduced stocking numbers to 60 per cent of the recommended stocking rate.

"We are aiming at having a good food source on the ground at all times, even during dry periods," he said.

"It also means that during a drought period, we lighten off a lot earlier than most people would, but we have also discovered that we don't have to because we can hold on a lot longer than most other areas."

Throughout the carbon project and even prior to, Mr McQuie said that even if they go through a dry spell, they have been able to maintain their numbers more and for longer compared to areas running at full capacity.

This has then allowed their stocking rate to be more constant despite variable seasonal conditions.

"We now run about 1700 breeders - we could push that a lot higher if we weren't running a carbon project, but in time as the rangelands condition increases, we will be able to increase the numbers, because effectively our modelling will show that if we have an impact on the project," he said.

"If we aren't having an impact on the project and everything is still moving forward, then there's no reason we can't change numbers and lift them a bit, because we would pick that up in the next monitoring if (vegetation) numbers have gone back at all."

Mr McQuie said from an observation perspective, the country hasn't shown a major change but from a scientific point of view, strong progress has been made and it's still early days.

"In the rangelands things happen fairly slowly," he said.

"Unless we get a massive rainfall event, it can take 10 to 15 years to see a big result.

"Visually we won't see a big change for five to 10 years, but from a scientific perspective, we are picking up all the smaller plants that are growing and have seen a result and we do know that it is actually working and plants are germinating.

"And nature does what it does best if you let it have a go - it will grow things but you have to give it the chance."

Along with providing another profitable income stream, Mr McQuie believed carbon farming in conjunction with pastoralism would have a flow on benefit to the community.

"I maintain that we have to have livestock production at the same time as carbon farming, because if you shut everything down and get rid of all the livestock, then you don't need staff and the local community suffers," he said.

"I took a much bigger look and thought this would be something that can benefit the region, rather than just individual properties - then the whole area benefits."

The McQuie's partnership with RegenCo has seen the pastoralists do the land management side of the project and RegenCo takes care of measuring growth of the vegetation and marketing and selling the carbon credits.

Mr McQuie said he sought a partner that had expertise in the sector otherwise "it would be a fairly onerous job to do yourself".

"Pastoralists grow cattle, and as conservation pastoralists, we grow cattle but we also want to improve the condition of the rangelands," he said.

Upon reflection, Mr McQuie said the most difficult part of the whole process was changing his mindset around running a pastoral operation.

"Once you have made that change, understand it and can see how it's going to work, the rest is only a process," he said.

"The only thing for a pastoralist to do is change their mindset in how they look at the country, but it is achievable.

"My 83-year-old father (Murray) drives around now and doesn't look as much as the cattle, but looks a lot more at the regeneration.

For an 83 year old bloke who's been in the bush all his life, that's quite a mental step -it's just having the willingness to try something new."

RegenCo chief executive officer Tim Moore said the project has been a terrific outcome for both pastoralists and the environment, generating carbon revenue valued in excess of $2m at current market prices.

"Carbon farming and HIR practices allow farmers to be more profitable and implement infrastructure that will enhance their pastoral production resilience in dry times, while also reviving their land and capturing carbon," Dr Moore said.

Carbon credits or Australian carbon credit units (ACCU) are earned for each tonne of greenhouse gas emissions or a carbon dioxide equivalent (CO2e) that's been sequestered through approved methods, such as HIR and reforestation projects.

Like any commodity, an ACCU can be traded by producers, consumers or investors - with the Australian government and large emitters the most active buyers in the market at the moment.

The Commonwealth Emission Reduction Fund (ERF) operates through a reverse auction process, where producers like Bulga Downs and RegenCo submit bids to sell their ACCU's, and sets the standard market cost.

Essentially, they are price setters, not price takers, unlike most primary producers.

"We believe that agriculture can play a key role towards addressing climate change by reducing and offsetting carbon emissions while also supporting struggling farmers," he said.

"We're excited at the potential to replicate the Bulga Downs success across the country and help Australia achieve its emission reduction targets."