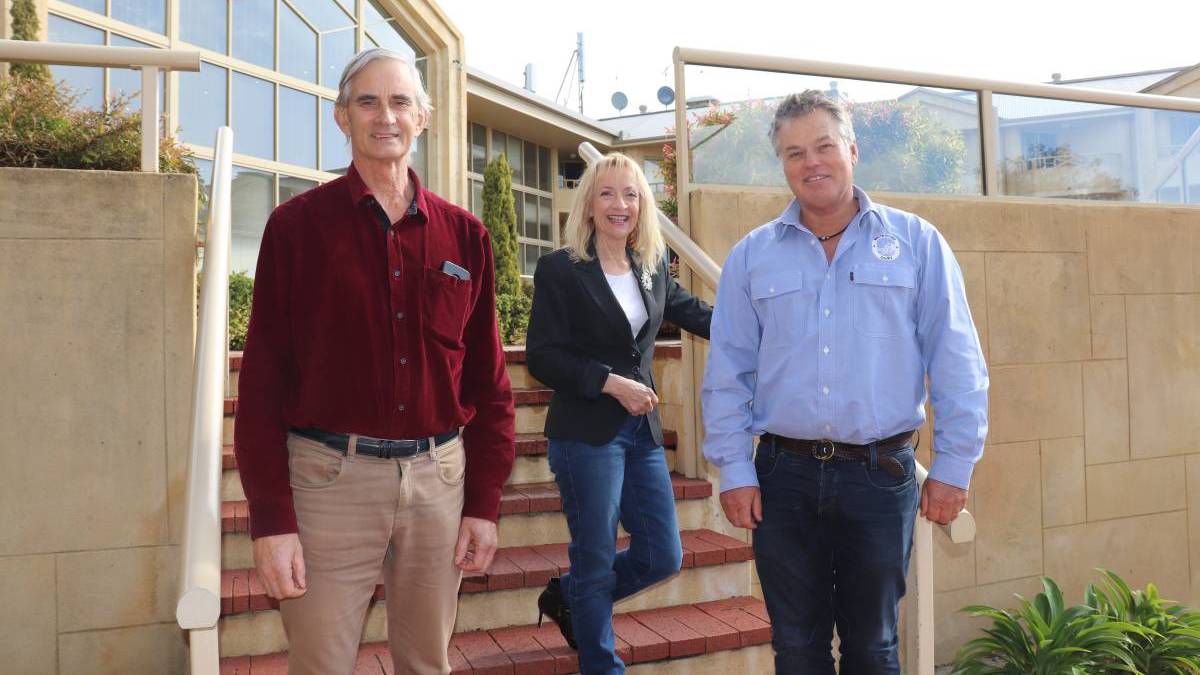 WAFarmers dairy section president Ian Noakes (left) is expected to retain the role for another year. He is pictured after he was first elected last year with Federal Forrest MP, assistant minister for Regional Development and Territories and Harvey dairy farmer Nola Marino and dairy council immediate past president Michael Partridge.

FORTHRIGHT WAFarmers dairy council president Ian Noakes has nominated to retain the role at the council's annual meeting this Thursday.

Mr Noakes, who was elected president last September after four years as vice-president to past president Michael Partridge, confirmed this week he had nominated again.

He is unlikely to be challenged.

"When I took it (dairy council president) on, I knew it would be for more than one year," said Mr Noakes, who farms with wife Helen and sons Brad and Steve at Forest Grove.

His is one of two South West dairy farming family enterprises supplying Woolworths for its Farmers Own brand milk.

Mr Noakes said he was unsure at this stage whether he would have a vice-president for the coming year.

For the past 10 months he and executive manager Laura Stocker have run the dairy council without a vice-president, after no nominations were received for the position at the last annual meeting.

In his president's report to the annual meeting he is expected to report on industry and Department of Primary Industries and Regional Development workshops aiming to establish a five-year plan for a sustainable local dairy industry.

This week Mr Noakes described the recent price rises offered to WA dairy farmers by processors as "fiddling around the edges".

"They were only small increases and partly seasonal, when what the (WA dairy) industry needed to become profitable was a decent base rate increase across the year," he said.

"WA has the lowest retail milk prices in Australia and we (dairy council) want to know why, because it impacts on prices down the supply chain to farmers.

"But the situation is changing.

"Now some of them are looking for more milk."

Coles, which is regarded as a milk processor since it began buying milk direct from eight WA dairy farmers last October and added two more suppliers in January, is one processor looking for extra milk.

Last month Coles indicated in its published standard-form milk supply agreements, it is "recruiting" up to an additional 2.5 million litres of milk a year in WA, taking its desired total in 2021-22 to 36mL a year.

Lactalis Australia, which owns the Harvey Fresh milk brand and processing plant at Harvey, is also said to be chasing extra milk for later this year when it begins processing milk for Woolworths' own brand and Farmers Own brand.

Brownes Dairy has held the Woolworths contract, which finishes at the end of the year, for the past seven years, but has lost the new contract to process milk for Woolworths to Lactalis.

Lactalis is understood to have already lured three milk suppliers away from other processors during last month's annual milk supply agreement negotiations.

The dairy code requirement for processors to publish standard-form agreements and prices at the start of June each year so dairy farmers can choose which one to sign with before July 1, plus the option of Coles as an additional processor and the impending change of the Woolworths' contract is said to have sparked more movement last month of dairy farmers between processors than in recent years.

Lactalis said in its standard-form WA milk supply agreements last month it wants 135mL of milk in 2021-22, but it has not indicated whether this is substantially more than last year.

In the Eastern States, some processors, including Lactalis, had to issue increased second price offers last month after initial offers failed to attract sufficient volume commitment from dairy farmers for the year ahead, for them to meet production for retail targets.

Securing supply could become an issue for milk processors and major retailers in WA too, Mr Noakes said.

"Cattle are bringing fantastic prices (at market) at the moment (so dairy herds are likely to continue shrinking).

"The smart thing would have been for one of the processors to jump in last year and offer a few cents per litre more to farmers (to secure supply)."

The dairy council annual meeting will be held after WAFarmers' annual dairy conference, titled A Sustainable Future of the WA Dairy Industry, at Busselton this Thursday.

- Dairy Australia's June Situation and Outlook report said consumers have grown more conscious of spending choices over the past year with the COVID-19 pandemic and retail sales of branded dairy products have outpaced sales of private-label variants.

This has seen the sale value of milk and "yellow" spreads rise by 5.3 per cent and 3.8pc respectively, the report said.

Dairy Australia has predicted national milk production will continue unchanged or, at best, grow by 2pc in the year ahead, equivalent to between 8.8 and 8.97 billion litres.