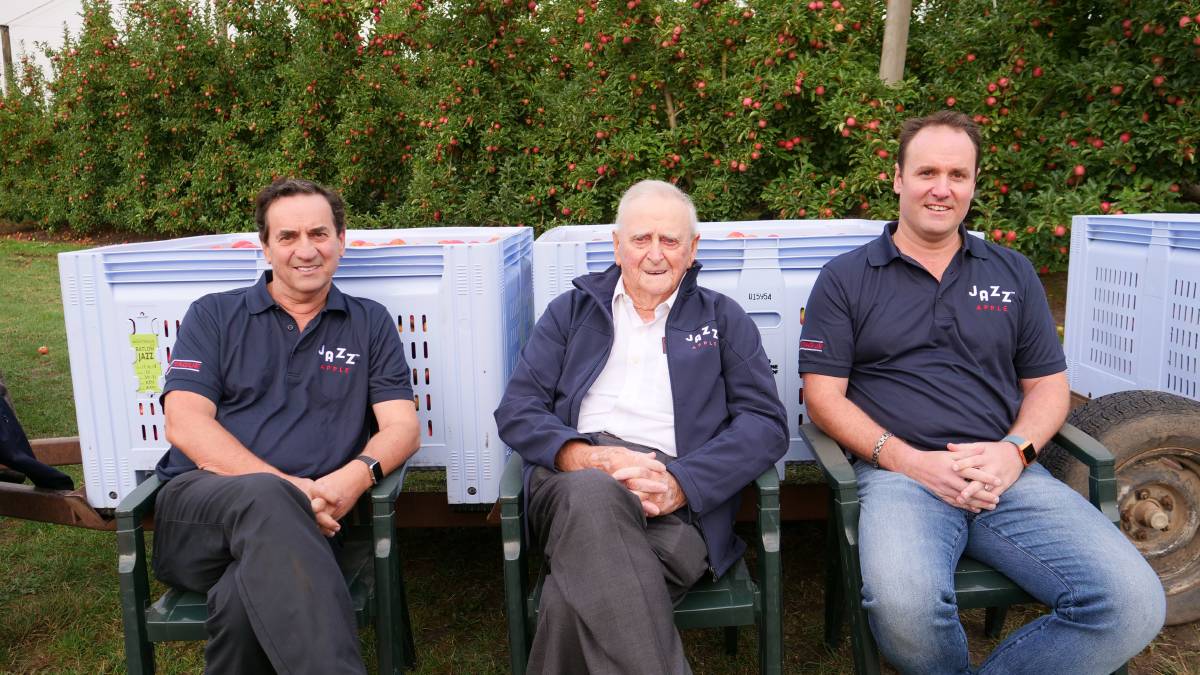 SHE'LL BE ORANGES: Three generations of Montagues, Ray, Bill and Scott, are building on their apple and stone fruit business by diversifying into citrus and table grapes.

Montague, one of Australia's biggest names in apples, is moving into citrus and table grapes with the $10 million purchase of the 93-hectare Piscioneri Farms near Mildura.

Montague, one of Australia's biggest names in apples, is moving into citrus and table grapes, beginning with the $10 million purchase of the 93-hectare Piscioneri Farms near Mildura.

"We've got a new packing facility at Narre Warren with stone fruit grading equipment that sits idle during the middle of the year, and that equipment can pack citrus," Mr Montague said.

"It's about utilising our resources for longer periods of time. And not only resources in terms of facilities and equipment, but our people."

Scott Montague belongs to the third generation of the family business that was started in 1948 by his grandfather, Bill. Today, Montague turns over $160 million a year and employs 300 full-time staff, a number which swells to 500 during harvest.

The new property is planted with 84ha of table grapes as well as Eureka lemons, Afourer mandarins and Cara Cara, and Fisher navel oranges and comes with a high security water allocation.

"Only 60 per cent of it is fully producing at the moment, which means the investment's been made, and will come into maturity over the next few years.

"Harvest is spread out over three or four months so no overexposure to any one particular variety or timing."

He expects there will be around 140,000 boxes of table grapes. The fruit will be sold both domestically and to Asian export markets.

"We've been very buoyed by our customers, whether domestic or export, who have been very keen for us to work with us on multiple commodities," Mr Montague said.

"The beautiful thing about grapes and citrus, compared to apples and stone fruit, is that they've got wider access to international markets than our current commodities and that's exciting because it means you're not as exposed in one particular area."

Even before the Piscioneri Farms purchase, Montague had already begun to diversify with a wholesale vegetable arm in Queensland, which represents about 5pc of the group's total turnover. The rest, Mr Montague said, was split almost evenly between apples and stone fruit. It grows 35pc of the apples it sells.

"We work with growers we call 'like souls' who have the same philosophies that we do," he said.

"There's families that we've dealt with for a long time who grow Jazz for us in Stanthorpe in Queensland for example, and then in southern Tasmania."

Mr Montague said his business planned to increase its citrus holdings to spread risk across commodities, leverage its packing resources year-round and connect with customers.

"We probably have a capacity to go towards 10-15,000 bins of citrus in terms of what our production facilities can pack, so we're not going to be the size of Mildura Fruit Company or some of those guys but it's about maximizing our resources," he said.

We probably have a capacity to go towards 10-15,000 bins of citrus ... so we're not going to be the size of Mildura Fruit Company or some of those guys but it's about maximizing our resources. - Scott Montague

Despite the importance of diversification, Montague was determined to stick to its core business.

"We don't intend to get into vegetables and things like that. We're about tree fruit, so that's where citrus and vines fit in because it's probably where our growing expertise is."

Montague expects to increase its revenue by 35pc to 40pc in the next five years, based on its current plantings and sales opportunities but Mr Montague was far from complacent.

"We think there's opportunity within horticulture, but we must be mindful that it's not a free for all," he said.

"Two years ago, it might have been a different kettle of fish when people were so buoyant on the Chinese opportunity.

"Every business will be a little bit more guarded now about its exposure on a world scale so you need a really good mix of customers, domestic and international, in as many markets as you can."

Back at home at Narre Warren on the outskirts of Melbourne, Montague is embarking on consumer education, opening its own restaurant and retail store in the orchards.

"I don't think we're very sophisticated in the apple industry about celebrating the different flavour profiles of apples, so we're trying to really educate people on taste" Mr Montague said.

"The cheese industry does it very well and wine as well.

Mr Montague said apples were categorised by sweetness versus tartness and dense versus light texture. Like any diplomatic judge, choosing a favourite was difficult but he did arrive at the season's top pick.

"This year, the best apple that I've eaten is Ambrosia," he said.

"It's brand new. It's not well known at all but it's sweet with a light texture so you don't feel full after you've eaten it and it's got a bit of a hint of a honey background."