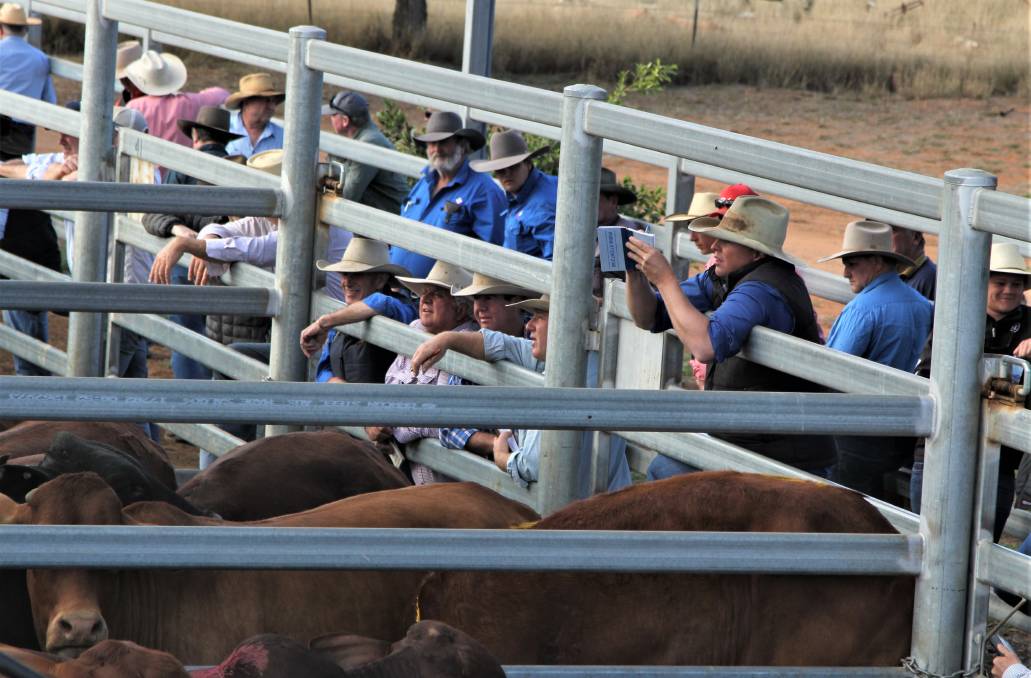 AROUND THE RAILS: The action at Blackall, Queensland, last week. IMAGE: Sally Gall

EYCI drops 11.90c in the week but another rally still possible

THE benchmark Eastern Young Cattle Indicator has managed to notch up a week without setting a new record but has only eased slightly.

With more rain on the radar in the south, it is unlikely to go backwards to any great degree in the next week.

The EYCI is today sitting at 998 cents per kilogram carcase weight, having lost 5c in the past week. That is still 46c above where it was four weeks ago. Feedlot buyers have also jumped to taking a 51 per cent share of EYCI-eligible cattle.

Analysts aren't ruling out another rally before the much-touted downward trend begins in earnest however most seem to be leaning towards the possibility we've now seen the peak.

Meat & Livestock Australia's latest cattle projections, released last week, included a new aggregated industry average EYCI forecast, which suggests the indicator will be at 874c by the end of the year.

The best case scenario has it dropping back to just 968c, while the forecast low is 809c.

Thomas Elders Markets put it at 920c by the end of December.

TEM analyst Matt Dalgeish said analysts were now keeping a close eye on the heavy steer price, which peaked at 430 cents a kilogram live weight last week - a level that was 'off the charts' compared to overseas prices. It remains above 400c.

"While that indicator stays high, there is a chance of one more rally in EYCI," Mr Dalgleish said.

International analyst Simon Quilty, Global Agritrends, says it is now the chronic lack of skilled meatworks labour, along with a delayed rebuild due to poor calving rates and record global trim prices that are driving the market.

That situation is likely to see cattle prices move higher, he believes. Global Agritrends puts the peak at 1015c/kg and forecasts it will come in October or November.

The ratio is now 45.5 per cent and the expectation is it will be around 42pc in November.

MLA's projections said traditionally cattle prices were not expected to reach yearly highs in the second part of a year but 2021 continued to defy expectations.

"Competition at selling centres has been heated between feeder and restocker buyers, with the Eastern States Feeder Indicator also rising by 117c, or 30pc," MLA's projections said.

And in line with the astronomical lift in young cattle prices, the National Medium Cow Indicator has risen 20pc year-on-year and the heavy steer indicator 22pc.

MLA says cattle producers, particularly in NSW, are expected to experience the best spring in recent memory and that will continue to support ongoing restocker interest.

Globally, as economies continue to recover from COVID-19, demand for Australian beef should also improve and that would ensure feeder buyers remained prevalent at selling centres.

The story Heat comes off the EYCI first appeared on Farm Online.