"These are historically sold at this time of year due to producers locking up paddocks for fodder production."

NUMBERS, quality and a conventional market ease was the nutshell summary at the Nutrien Livestock monthly store cattle sale at Boyanup on August 6.

The Nutrien Livestock South West team yarded smack on advertised numbers with a quality yarding of 1602 store beef and dairy cattle featuring plenty of weight and condition in a wet winter fixture and several drafts of quality owner-bred cattle from annual sale vendors.

Though a majority of descriptions were quoted as softened by varying degrees, the sale still averaged $1545 across the increased yarding, back only $124 on the company's July sale average. Buyer and Nutrien Livestock pastoral agent Shane Flemming (left) caught up with Tony Ferraro, Yarloop, before the start of the sale.

In the appraisal section mated mature cows with two to four-month-old calves at foot sold to $3400, while PTIC mature cows topped at $2450 and PTIC heifers $2400.

KL & SA Payne, Capel, offered 39 even well-bred Angus steers weighing from 410-457kg with Campbell Nettleton, Harvey Beef, an active buyer throughout the heavier pens of beef steers and paid the Payne's $2240 top price for the 10 heaviest steers with a 490c/kg bid.

John Gallop secured several pens of beef steers for a southern lotfeeder, paying to $2146 at 508c/kg for 10 of the Payne steers weighing 423kg. 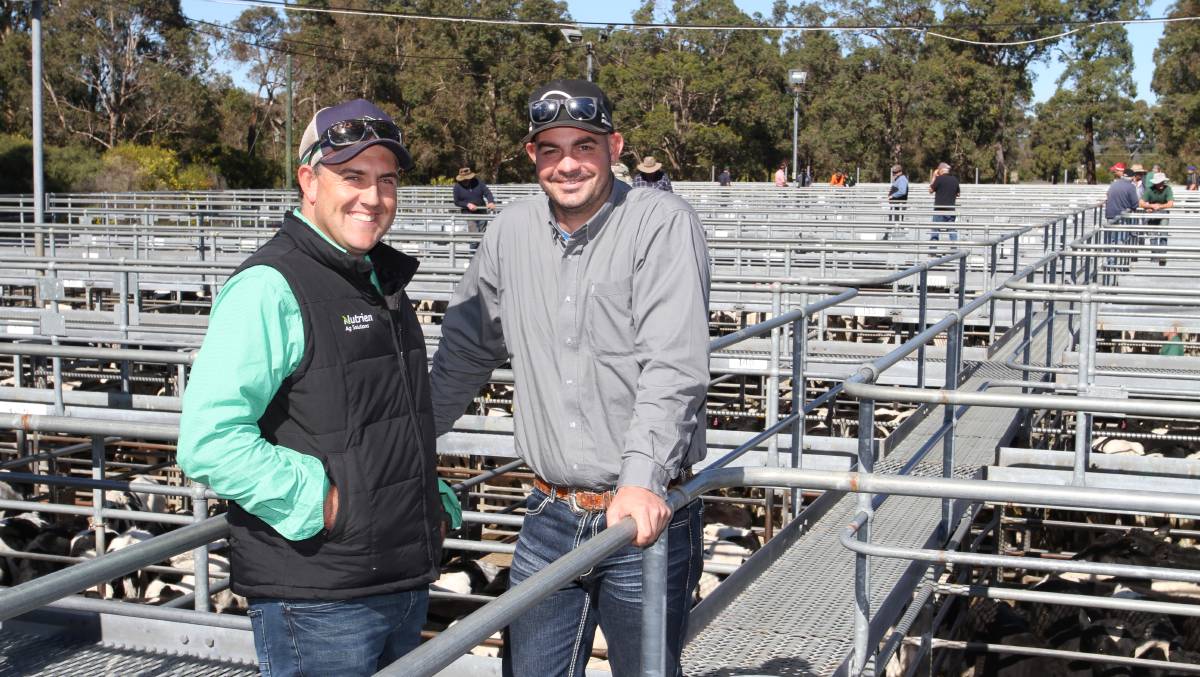 Hull & King also claimed the top liveweight heifer value with another single Speckle Park heifer weighing 160kg, which was knocked down to Mr Roberts for 635c/kg and $1016.

IA & HE Noakes, Karridale, was another bigger vendor of first cross steers which sold to $1712 at 430c/kg for eight Angus cross weighing 398kg selling to Nutrien Livestock pastoral agent Shane Flemming for a northern lotfeeder.

Friesian steers were in dominant numbers with Mr Gallop paying top dollar for the opening pen of eight Friesian steers weighing 583kg, one of three pens of steers purchased from P & T Curulli & Son, Harvey, knocked down for 358c/kg and $2085.

Greg Jones battled it out on the heavier Friesian steers and finished with four pens, paying to $1930 and 332c/kg for eight steers weighing 581kg offered by R & C Italiano & Sons, Harvey.

Other bigger vendor drafts of younger Friesian steers included P & G Oates which topped at $1439 at 468c/kg for a pen of 14 averaging 308kg, knocked down to Allan Pearce, Nutrien Livestock, Albany. A couple of pens of first cross Angus heifer poddies sold appraisal to $720 for a trio offered by G & PA Angi.

A line of 14 Angus heifers PTIC to a Charolais bull due February to March, trucked in by KJ Grazing, proved good buying when they sold to Mr Vigolo for $2400 as did a draft of 43 rising sixth calving Angus cows PTIC to an Angus bull due to calve form October 25 to December 27 from Elysian Fields which topped at $2450 for 10 cows going to Mr Gardiner.

"These are historically sold at this time of year due to producers locking up paddocks for fodder production," Mr Waddingham said,

"Buyer activity was still strong and with the exception of the heavyweight slaughter grade Friesian and first cross steers which were 15c/kg dearer, the balance of the market tempered slightly as is common at this time of the growing season."