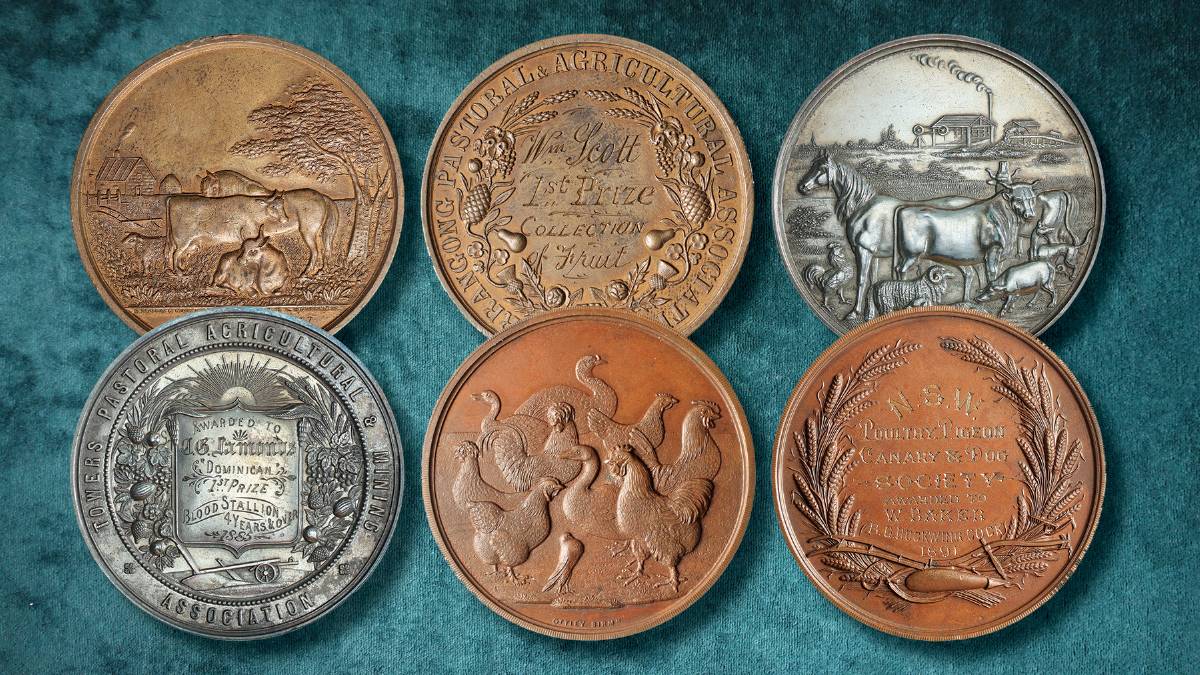 Noble Numismatics is offering a number of agricultural and pastoral association medals during an auction next week.

A number of agricultural and pastoral society medals will go under the hammer from August 30 to September 2.

Winning a championship at local or royal shows has long been a goal for many of Australia's primary producers.

These days titles are marked with a broad ribbon or prize money but for winners in the 19th century, accolades were marked with medallions.

A number of these pieces of show history will go under the hammer from August 30 to September 2 during Noble Numismatics' auction of rare coins, medals and bank notes.

Noble Numismatics managing director Jim Noble said a lot of medals were issued in the 19th century but the size of shows and the cost associated with producing dies had seen the custom fade.

"There are so many agricultural societies that have been formed and issued medals as prizes in the 19th century, like you'd get at the Sydney Royal Easter Show," Mr Noble said.

"Some of the main makers were in Melbourne at Stokes and later a couple of others, then in Sydney at Amor.

"Their job was to create dies that could be used to produce medals and inscribed as prizes at shows."

The medals feature intricate, raised scenes of livestock and cropping on the front with the winner's details engraved on the back.

They offer a unique insight into Australia's pastoral history and carry estimated values ranging from $100 to $700.

"Another interesting one is a National Agricultural and Industrial Association of Queensland medal for belts and pouches, lot 870," Mr Noble said.

"Some of them are quite pretty, like lot 924, on its front it has a good display of poultry and birds."

A piece of timber from Captain James Cook's ship, the Endeavour, is going under the hammer.

Noble Numismatics holds auctions three times a year and next week's collection has been valued at more than $3.5 million.

One of the headline items in the auction will be the sale of a piece of timber from the Endeavour, the ship Captain James Cook commanded on his first voyage to Australia.

The timber is part of the keel retrieved from the wreck of the ship at Newport, Rhode Island, USA, and is valued at $400,000.

Other lots expected to garner interest include a square 1921 Kookaburra pattern halfpenny likely to fetch in excess of $100,000, while a consecutive pair of Australian ten-shilling banknotes issued in 1913 with an accompanying presentation letter is estimated to go for $125,000.

Start the day with all the big news in agriculture! Sign up below to receive our daily FarmOnline newsletter.

The story How much would you pay for a piece of show society history? first appeared on Farm Online.