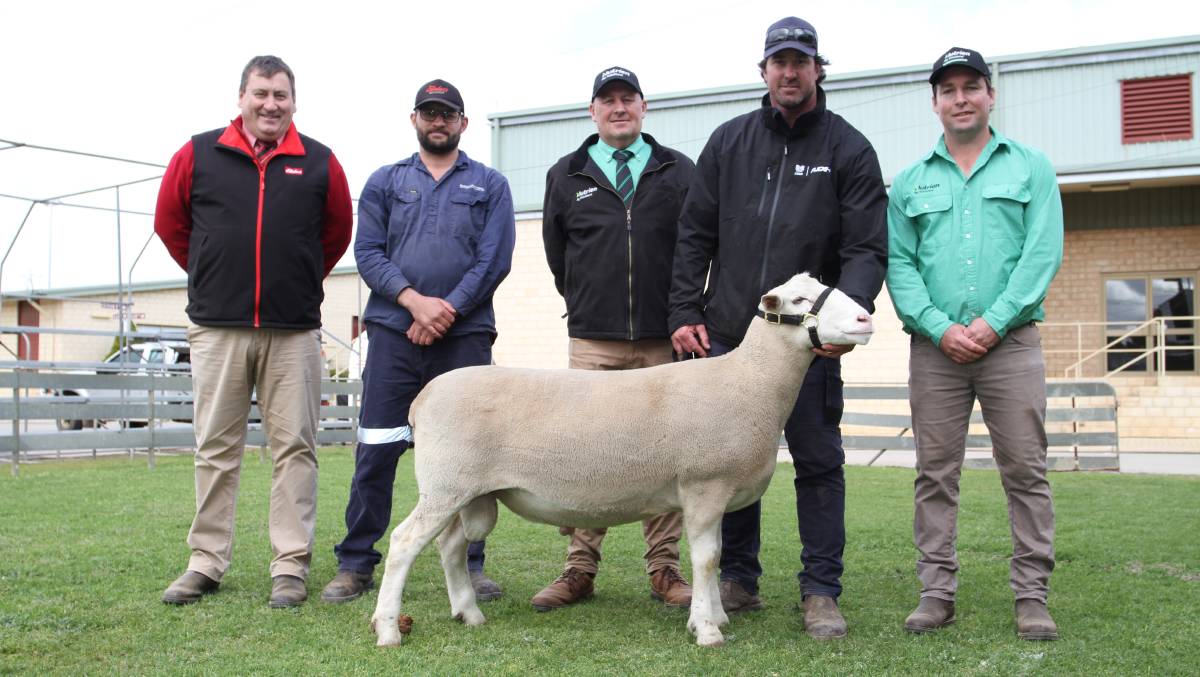 But generally buyers were selective which impacted some clearances.

THE Elite White Suffolk and Suffolk Sale hosted another State record price amidst mixed results at Wagin on August 23.

The fifth annual sale returned to its original home at the Wagin Ram Shed following two years at Williams and saw a top line-up of elite prime lamb sires and ewes featuring the first stage dispersal of the Kantara White Suffolk stud, Dumbleyung, with one of the Kantara ewes selling to what is believed to be a new WA record price of $4000 for a White Suffolk ewe sold at auction.

The inclusion of 108 1.5-year-old ewes significantly increased overall numbers from last year, but ram numbers were well down on last year's sale.

The sale attracted a register of 33 buyers from throughout WA's agricultural areas and was again interfaced on AuctionsPlus.

The online platform had 3154 catalogue views which saw 38 registered bidders logged in from all States, resulting in 19 bids across five lots and two lots selling to local WA buyers.

While crowd numbers were quieter than last year, a number of lots generated spirted bidding battles to see some solid values recorded.

But generally buyers were selective which impacted some clearances.

The Nutrien Livestock and Elders selling teams offered 17 White Suffolk and Suffolk rams from nine vendors with 11 rams (65 per cent) selling under the hammer to average $5373.

This signalled an $1827 drop in average compared to last year's sale where 15 of 39 White Suffolk, Suffolk and Poll Dorset rams (38pc) sold at auction to average $7200.

The Kantara dispersal saw 96 of the 108 ewes (89pc) sell under the hammer to average $591, however the other eight White Suffolk and Suffolk ewes offered from three vendors made for light reading with just two selling under the hammer for a $1050 average.

A line-up of 14 White Suffolk rams kicked off proceedings with 10 rams (71pc) finding new homes at auction to average $5660. 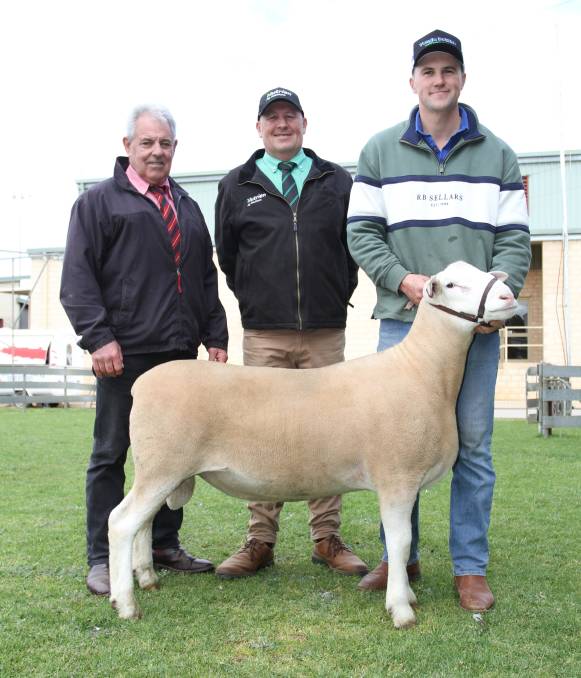 The following Golden Hill ram was purchased by the Utopia White Suffolk stud, Bremer Bay, for $7800.

Another Yonga Downs 180703 son in the next pen was snapped up by the Ashbourne White Suffolk stud, Katanning, for $3600.

Following last year's record breaking result, the Ida Vale stud, Kojonup, opened this year's sale with two rams with their second ram selling for the sale's next highest price of $8000 which was also purchased by the Boree stud.

Boree Park stud manager Micheal Potter said they have been repeat buyers from the Golden Hill and Ida Vale studs for the past three years.

"The two rams were purchased to go over specific lines of ewes, one for its figures and one for its rapid growth and huge eye muscle," Mr Potter said.

"We have faith the Golden Hill and Ida Vale sheep do the job and have had no reason to go anywhere else.

"And being among the top prices reflects the quality of the two rams." Buyer Michael Collard said it was the first Iveston ram he had purchased, providing an outcross to his 2017 registered stud based on Kiara, Blackbutt and Stockdale bloodlines.

He said the Iveston ram was easy doing with plenty of meat and would be used over half of the 100 registered stud ewes in mid-December where he breeds flock rams for onfarm sales.

A WA buyer on AuctionsPlus paid $4000 for a ram from the Cole family's SASIMWA stud, York. 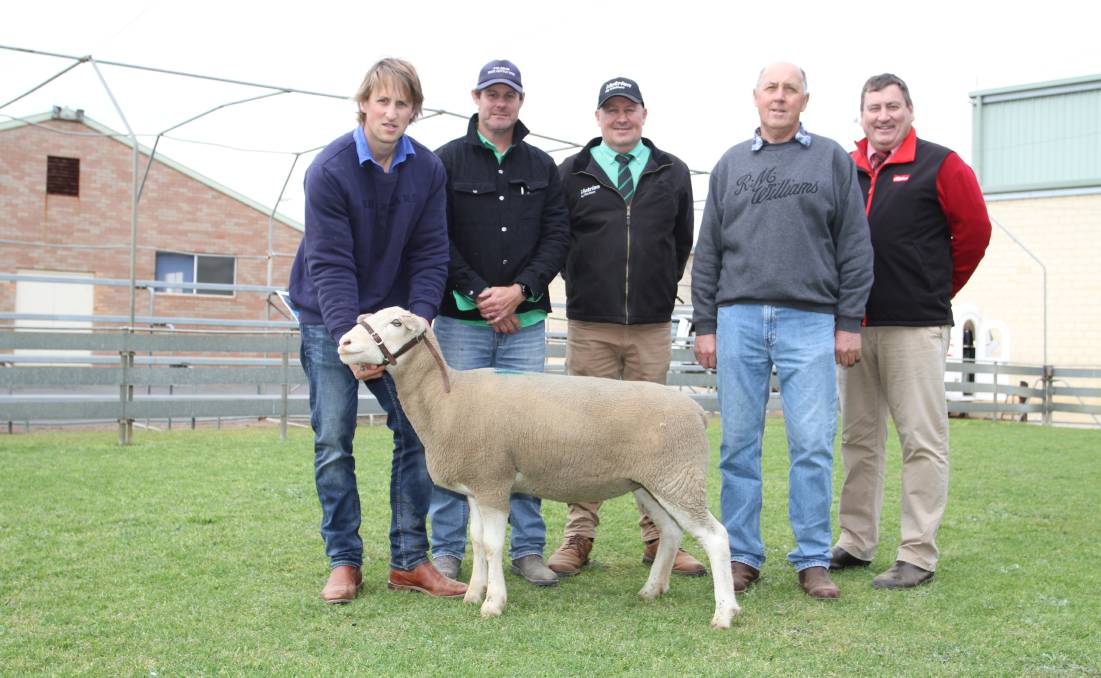 Just one of the three Suffolk rams catalogued sold at auction for $2500 compared to last year's sale where only two of six rams sold for a strong $6625 average.

The $2500 ram from the Mitsopoulos family's, Kalinda stud, Boyanup, was purchased by Nathan Willmott, AM & TL Willmott, Tambellup.

Mr Willmott said they have been breeding their own Suffolk flock rams for about six years from a nucleus flock of Suffolk ewes to use commercially over Merino ewes for prime lamb production.

He said the Kalinda ram presented and stood well and backed it up with its performance figures.

While initially overlooked at auction, a Karinya Suffolk ram was sold following the sale for $3000 to the Maiolo family, Rocky Ridge Suffolk stud, Narrogin.

In total 114 White Suffolk ewes were offered at the sale with 98 ewes (86pc) sold at auction for an average of $600 which included the Kantara dispersal.

Excluding the dispersal, two of six White Suffolk ewes offered by three vendors were sold by the Kohat stud for a $1050 average.

The Kintara dispersal of 108 ewes rounded out the sale and 107 lots later, the new WA record price of $4000 was paid for the final ewe offered by Josh Addis, Kalagan White Suffolk stud, Denmark.

Mr Addis collected six Kintara ewes at the sale and said he was after ewes of good type with figures above their own flock average.

"The Kintara dispersal was a good opportunity to select from a big lineup of good honest young ewes," Mr Addis said.

"They were a very even line of paddock run ewes, what you see is what you get and a credit to Keith Ladyman.

"You could buy with confidence."

But by far the most influential buyer of Kintara ewes was Roy Addis, Nutrien Livestock Breeding, who filled an order of 60 ewes at $500 each for the Ledwith family's Kolindale White Suffolk stud, Dudinin.

Another volume buyer was Scott Jefferis, Nutrien Livestock, Dumbleyung, who collected 15 ewes on behalf of the Sutherland family's Sandown White Suffolk stud, Perenjori, paying from $500 to $550.

Some other higher priced Kantara ewes included the Venturon White Suffolk stud, Boyup Brook, who paid to $1700 for one of two ewes and the Golden Hill stud paid $1300 and $1250 among their three ewes.