A band of loyal regulars and one new client showed their appreciation for the Ledwith family's annual commitment to truck quality rams from Dudinin to their doorstep, responding with spirited, confident bidding. 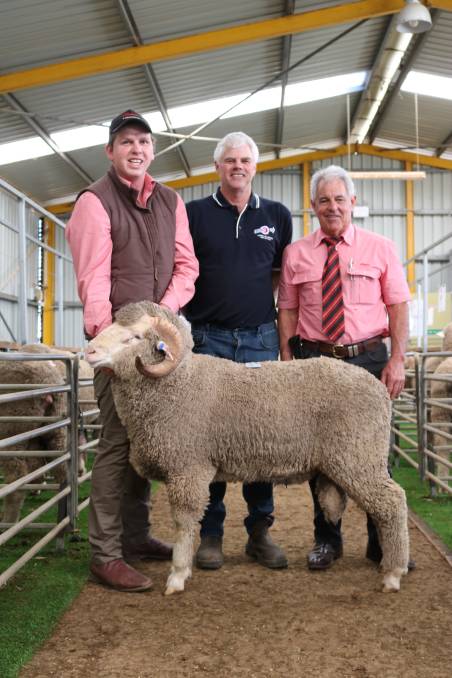 AN average up $823, a gross increase of $71,300 and a top price that was $700 better than last year, were highlights of last Monday's Kolindale Esperance ram sale held at the Esperance Showgrounds.

A band of loyal regulars and one new client showed their appreciation for the Ledwith family's annual commitment to truck quality rams from Dudinin to their doorstep, responding with spirited, confident bidding.

Under the hammer of Elders auctioneer Preston Clarke, the result was a clearance of 81 of the 83 rams offered for a top price of $3300 and an average of $2110.

Where last year it was a Poll Merino which claimed top honours, this year it was Merino rams which marked the honour board with the top two secured by Callum O'Neill and Michael Forward, Elders Esperance, for the Belli family, Phillips River Grazing, Ravensthorpe, at $3300 for pen 14 and $3200 for pen 40.

Glenn and Lynnel Belli, who farm with their son Peter and daughter-in-law Jules, know the Kolindale product well, having been on the bloodline since 1978 and continue to find the big frames and long white wools they prioritise.

Further proof that top genetics keep rising to the top came in the Poll Merino line-up where like last year it was a ram which hails back to Collinsville Regal bought for $66,000 at Adelaide that prevailed.

It was last year's top price Poll Merino buyers Rocket (Graham) and Alanna Harris, Grass Patch, who returned for a repeat performance, albeit at $400 more.

"We wanted frame and this ram had plenty of width and length of body, with clean white wool, even crimp and a bit of tip," Mr Harris said.

In total their GL & AM Harris account had five rams marked against it destined for their 900 head Merino ewe flock.

Driven by record meat prices and with wool playing a solid hand in the profit package, volume buyers had a significant influence on the day's result. 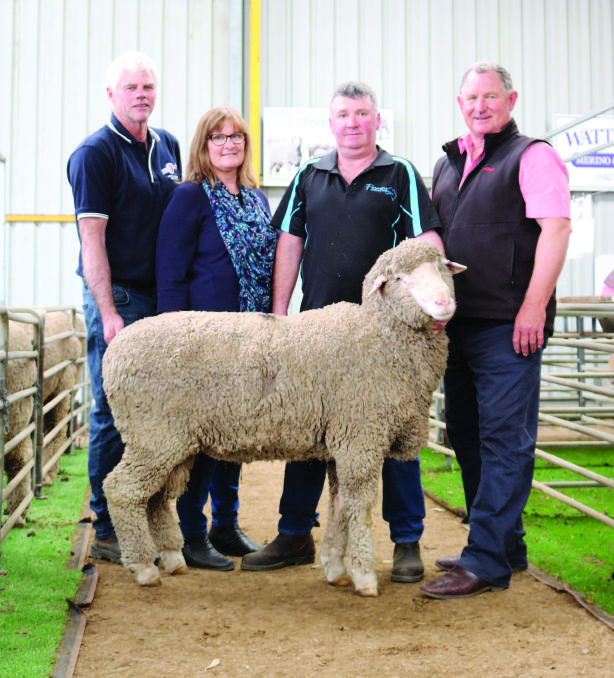 Richard Fowler and his son Simon, Chilwell, Condingup, were back in force securing 17 rams, mostly Merinos which are their preference, to a top price of $3000 and $2306 average.

"We would have liked a few more," Simon said.

"The rams were good today, they really are getting better every year with good frames, good strong heads and horn set and the right structure.

"Luke is doing a great job down here and while he continues to support the Esperance region we will continue to support him."

The Fowlers are currently mating about 26,000 Merino ewes, with expansion on the agenda and finishing about 20,000 head annually through their own feedlot.

With this type of program, free growing, white wools coupled with frame and carcase attributes were their selection priorities.

Not far behind in the volume stakes and also chasing Merinos was last year's equal top-priced buyer Matthew Lea, Shalimar Farms, Grass Patch, who secured 15 rams to a top of $3000 and $2473 average.

"I was looking for rams in that 18 to 19 micron range with plenty of body size and wool quality," Mr Lea said.

"We have increased our ewe numbers by 400 to 2200 head in the past 12 months and are hoping to expand even further."

With healthy crops and plenty of pasture in the offing, it's proven opportune timing. "We like the same sort of sheep, big barrelly types around the 21 micron with plenty of constitution," Mr Della Vedova said.

"I've been watching Luke's progress for a while and like to support youth in the industry."

Mr Burnside made the move to Kolindale this year, following the disbanding of two local studs he previously bought from and said he appreciated being able to still secure the types of rams he wanted locally.

"We will mate about 2500 ewes, all to Merinos this year," Mr Burnside said.

Apart from comparing notes on ram selections, the pair also discussed the vagaries of the season with Mr Della Vedova saying he had received below average rainfall but was flooded and Mr Burnside was looking skyward for finishing rains on the back of a dry August.

Reflecting on the sale, Luke Ledwith said he was very happy with the result, especially since they had lost three regular clients who had gone out of sheep.

"This was the heaviest team we have presented and it was pleasing to see our focus on meat being noticed," Mr Ledwith said.

"As an industry we want lambs with high growth that can be turned off quickly and that will do better on less (feed) but are still heavy wool cutters."