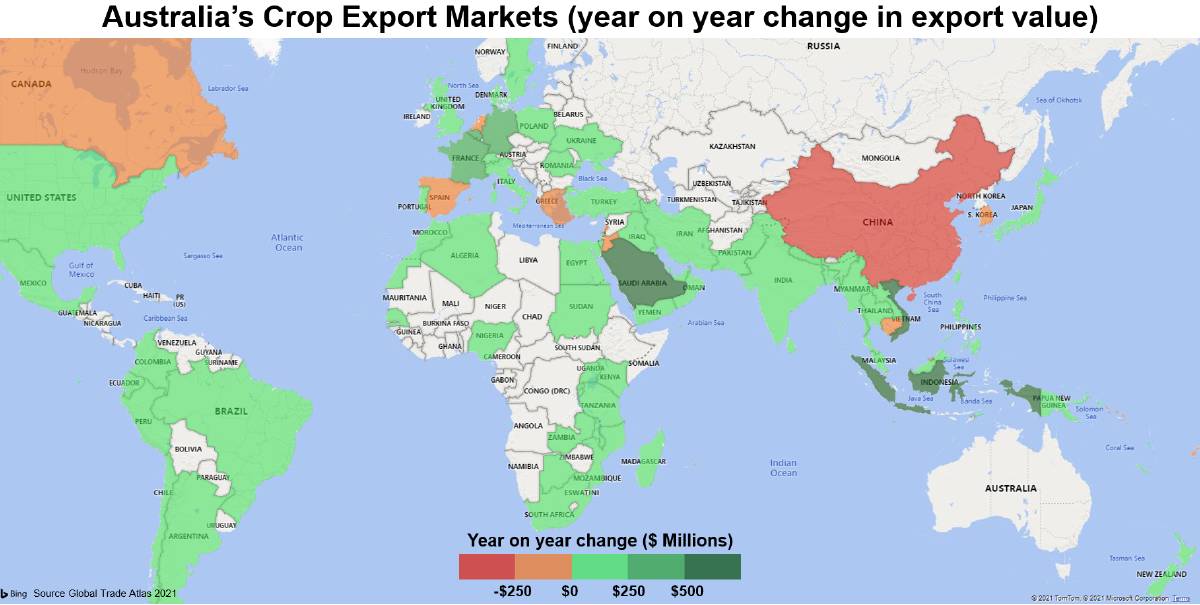 Australia's top export partners for cropping were Indonesia, China, and Vietnam. However, compared to the prior year, export value to China was down 32pc.

Indonesia was Australia's most valuable cropping export destination in 2020/21 with an export value of $1.3 billion.

AFTER a large production year in 2020/21 and a comparatively strong export year, let's take a look at Australia's most important cropping trade partners in the last year.

Indonesia took the mantle of Australia's most valuable cropping export destination in 2020/21 with an export value of $1.3 billion.

Cropping export value and volume increased by more than 250 per cent to Indonesia, with market share now 9.6pc.

The Indonesia-Australia Comprehensive Economic Partnership (IA-CEPA) contributed to this rise in export value.

Another important factor was Australia's ability to recapture demand as reduced supply and higher prices in the Black Sea region made Australian wheat some of the cheapest in the world.

The outlook for 2021/22 is for Indonesia to remain our top export market as Australian grain will remain cheap and tensions with China divert trade flows.

After seven consecutive years of holding the top spot, China has lost its position as Australia's most important grain export market.

China pays a premium to guarantee supply, with the average price per tonne of wheat sold to China 4pc higher than Indonesia.

China's purchases of Australian wheat have fluctuated in the past year, whereas South East Asian countries had steady demand, this trend is likely to continue this coming year.

Over the past 10 years, Vietnam has consistently been in Australia's top 10 cropping trading partners.

This is a very important market for Australia as Vietnam's middle-class continues to expand and demand with it.

Vietnam has also been active in purchasing Australian malt barley to use for beer, having become the third largest importer of Australian barley in 2020/21.

Vietnamese demand for Australian crops is expected to remain strong into the next season as expensive ocean freight keeps Australian grain competitive against origins from further afield.

Australia's fourth most valuable cropping export market in 2020/21 was Saudi Arabia, appearing in the top five for the first time since 2013/14.

While the volume of Saudi Arabia's barley imports was comparable to China, average export price and total value was lower.

This was because Saudi Arabia purchases feed barley as opposed to China that predominantly bought malt barley at a premium.

Demand from Saudi Arabia is anticipated to remain strong in the coming year, however not to the extent seen in 2020/21 with more competition from Black Sea origin barley.