"The final result was well up on expectations but it wasn't surprising given what the stud is doing & the way the livestock industry is at present." 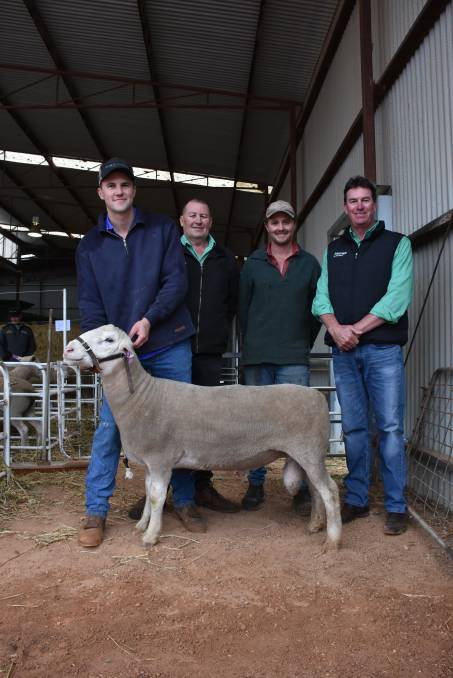 AS the rain tumbled down and the temperatures fell across the Great Southern on September 9, the heat in the selling shed at the Yonga Downs White Suffolk ram sale rose.

The sale topped at an impressive $6100 and averaged a blistering $1908 to set what is believed to be a new WA on-property sale average record for the White Suffolk breed and a prime lamb sire sale.

The competition was red hot across the entire catalogue of 98 rams from the 33 registered buyers from mainly the local area and as a result the Nutrien Livestock team led by auctioneer Mark Warren had no problems conjuring bids from prospective buyers - their biggest problem was keeping up with the bids coming in.

"The final result was well up on expectations but it wasn't surprising given what the stud is doing and the way the livestock industry is at present," Mr Warren said.

"It was another even line-up of White Suffolk rams presented by the stud and the first 50 showed exceptional figures and weights.

"Being only their fifth year of selling for the stud, it is very pleasing to see it again drew a crowd to buy the rams as the buyers know there are very good genetics behind them.

"There was very strong support from buyers that know the genetics and are getting the results from them.

"Brenton and Harriet are very passionate about the breed and because of this they will continue to increase the size of their offerings but there will certainly be no compromise on quality as they are continuing to invest in top quality genetics for the stud."

The strong sale result for the stud was set up early when 11 of the first 20 rams sold for more than $3000 and it was also in these pens, specifically pen eight, that the day's $6100 top price ram was located.

Mr Warren took an opening bid of $1500 on the well-balanced sire and from there the price quickly rose after a flurry of bids.

In the end it was the Hyde family, Kohat stud, Ongerup, which had the final bid at the day's $6100 top price.

Buyer Rivers Hyde said the ram was a good all round sire in terms of both its figures and physical attributes.

"He is a safe ram with a good hindquarter, while on the figures side he has extremely high growth to go with a good positive fat," Mr Hyde said.

"He will be an outcross bloodline for our stud as this is the first time we have purchased a Yonga Downs sire."

The second top price in the sale was $4400 bid by Millstream Pastoral, Albany, for an upstanding smooth sire catalogued in lot two.

This ram had the highest TCP index in the catalogue of 157.2.

There was another ram in the line-up to make $4000 or more and it was the first ram sold when it was knocked down to Kuloomba Farming, Esperance, at $4000.

Along with these buyers there were a number of other buyers which pushed the prices along.

Return buyers Braden and Kate Johnston, Johnston Plains, Nyabing, weren't afraid to bid up strongly after already off loading 2200 suckers this season at a $212 head average in the last week of August.

The Johnstons finished the day with a team of four rams at an average of $3200 after paying between $3100 and $3400 for their selections.

Mr Johnston said he liked the White Suffolk breed for its quick growth and because they produced a meaty lamb with a good carcase.

The suckers the Johnstons sold were sired by Yonga Downs White Suffolk rams and out of Prime SAMM-Dohne cross ewes.

Mr Johnston said they averaged 20 weeks of age and achieved an average carcase weight of 25.5kg straight off mum when killed at WAMMCO.

"We also sold some of their mothers (black and blue tags) through the Katanning saleyards at the same time and they averaged $220 a head."

This year the Johnstons are aiming to join 2500 to 3000 Prime SAMM-Dohne cross ewes to White Suffolk rams.

The majority of their lambs are dropped in April but they also drop a small number in July.

Matching the Johnstons as some of the sale's most influential buyers at the top end was Walyaming Farm, Katanning, which averaged $2860 across a team of five, while Mianelup Grazing, Gnowangerup, secured a team of four at a $2475 average.

There were two buyers that purchased teams of 13, to share the title of the sale's volume buyer.

Return buyers Ian and Denise McDonald, JV & CE McDonald, Gnowangerup, averaged $1554 across their team of 13 which topped at $2000.

Mr McDonald said they liked buying from the Yonga Downs stud because there was a good sized line-up to choose from and because they bred big, growthy rams.

The McDonalds aim to turn their lambs off as suckers and will join their White Suffolk sires to Border Leicester-Merino first-cross ewes for a July lambing.

Matching the McDonalds in the volume buying stakes was first-time buyer Australian First Farming, Pingrup, when it averaged $1323 across a team of 13 that topped at $1600.

"I like using the White Suffolk breed because they produce a good prime lamb," Mr Andreou said.

Other strong supporters of the sale were return buyer Mark Haynes & Co, Frankland River, purchasing eight sires at an $1788 average, while RW & JM Thomas, Mt Barker, averaged $2214 across a team of seven which topped at $3400 for a ram with a 145.8 TCP index.