The steer sold for $11,200 to eclipse the previous record of $11,000 set in 2019 with all funds donated to the Black Dog Ride, an organisation raising awareness for mental illness and suicide prevention.

An emotional Peter Milton said the Winston charity steers had raised more than $200,000 for the Black Dog Ride but more importantly had generated awareness which you can't put a value on.

"The generosity from the buyers is overwhelming," Mr Milton said.

She said the Minderoo Foundation was inspired by the important work done by the Black Dog Ride and wanted to help further.

"Depression and suicide is one of the areas our building stronger community's initiative is focusing on and the Black Dog Ride do a great job in raising awareness," Ms Forrest said.

"It's something we all need to talk about to make sure people are OK and it's not a stigma.

"It's a great honour to support people that are leading the way, Peter and Judy have been doing this for 14 years and it's fantastic how they connect people and children with animals to raise awareness."

Winston, which sold for a massive 1911c/kg, will be retailed through Bunbury Farmers Markets. 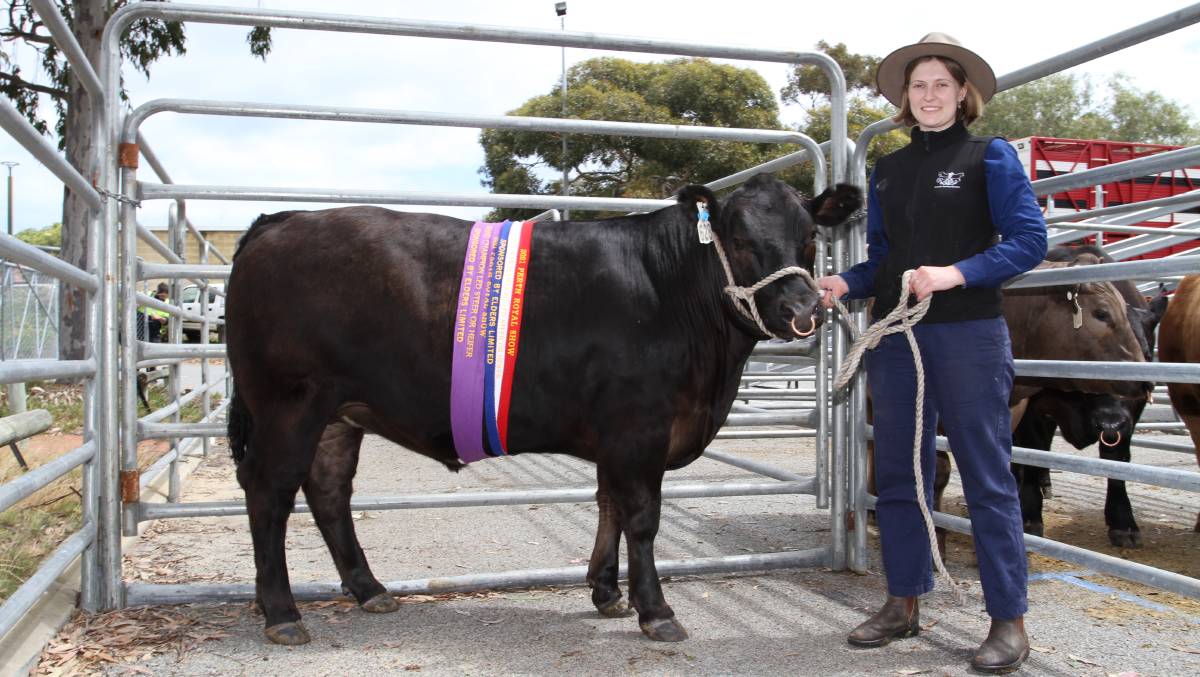 While Winston was a show-stopper, there were plenty of other highlights at the sale which saw values well up on the previous sale in 2019 and reflecting the strength of the current beef market and the quality cattle on offer.

WA's agriculture colleges, farm schools and Murdoch University dominated entries but the uncertainty that lingers with the COVID-19 pandemic saw trade cattle numbers down on the previous show in 2019 with 48 led steers and five led heifers selling under the hammers of S & C Livestock, Nutrien Livestock and Elders for a healthy average of $2925.

Traditionally the grand and reserve grand champion animals open the sale and this year was no exception with an impressive well-bred and prepared Limousin-Murray Grey steer exhibited by Murdoch University kicking things off.

The owner bred champion heavyweight steer tipped the scales at 512kg and was knocked down to Harvey Beef for $6800.

Mr Nettleton sourced a total of 13 steers and heifers at the sale with the balance of the account costing from $2800 to $3400.

A 566kg Red Angus steer from the Esperance Farm Training Centre judged the reserve grand champion and champion extra heavyweight steer was next up and sold for the next highest price of $4200 to Greg Jones buying for Western Meat Packers (WMP).

Mr Jones has been buying cattle at the sale since 1971 and the past 22 years with WMP and said they were proud to support the sale.

"The amount of effort that goes in from the handlers, breeders and producers is magnificent, it's a massive effort," he said.

Mr Jones finished the sale with 14 steers and heifers for WMP ranging in values from $1500 to $2400 which included a 394kg Square Meater steer exhibited by Doug and Erin Wilcock which was judged the reserve champion lightweight steer.

The next highest price of $3800 wasn't paid for ribbon winners but deep into the heavyweight catalogue for owner-bred Limousin-Murray Grey steer weighing 498kg also from the Murdoch University show team which was knocked down to Swansea Meats.

Swansea Meats finished with three animals including another extra heavyweight stablemate of the same breeding from Murdoch University with the 578kg steer returning $3500.

Statewide Wholesale Meats paid in excess of $3000 for three animals with their $3500 top price going to the 602kg owner bred Gelbvieh steer offered by the Summit Gelbvieh stud, Narrikup.

CowTown Grazing (Johnson Meats) was another prominent buyer with eight steers and heifers paying from $2200 to the sale's $3200 top heifer price for a 516kg Charolais cross heifer exhibited by Jim and Belynda Quilty, Elgin, which was also the reserve champion heavyweight.

Coles acquired eight steers costing from $2000 to $3000 while Mr Borello finished the sale on a high paying $3600 for one of two steers in the final lot, a 616kg Simmental steer exhibited by the WA College of Agriculture, Denmark.

What the agents said:

S & C Livestock manager Phil Petricevich said the overall standard of the cattle was very good with heavier cattle selling to strong values and highlighted by the sale of the Black Dog Ride Charity steer.

"It was a consistent sale with buyer feedback saying there was some reasonable buying in the lighter cattle," Mr Petricevich said.

"Congratulations to the Manning and Milton families for the fantastic job they did with Winston 14 and to the owners and staff at Harvey Beef for their great support of the Black Dog Ride."

"Despite led steer and heifer numbers being down, the quality of the cattle was exemplary," Mr Giglia said.

"This was reflected in the support from the buying fraternity which resulted in some great returns for exhibitors."

Elders auctioneer Graeme Curry said while numbers were down, it was fantastic to see the strong support from the state's agriculture education institutions.

"As expected it was a good quality line-up of led cattle that was well supported by the trade.

"And hopefully by next year without COVID-19 hanging over our heads, trade cattle numbers at the show return to pre-COVID levels."