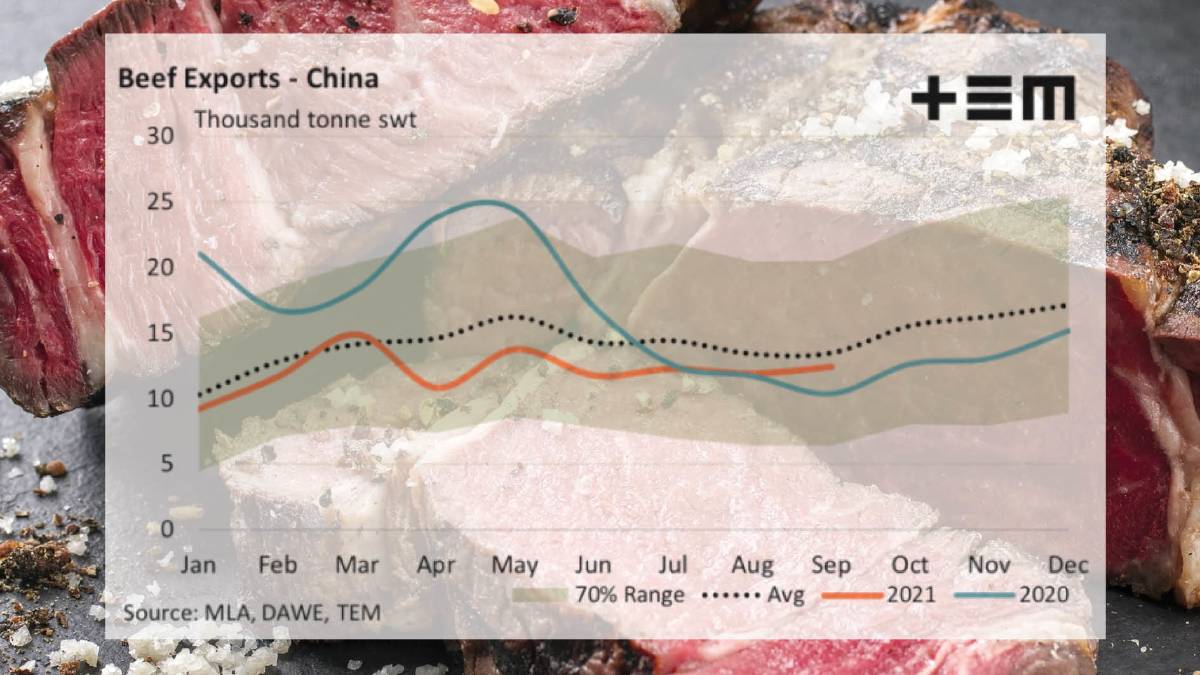 CHINA's taste for Australian beef is showing no signs of waning, which places the cattle business in a very good position given the world's most populous nation is touted to be the epicenter of rising global protein demand for years to come.

The latest government red meat export figures show beef shipments to China jumped 4 per cent on August volumes to 12,435 tonnes shipping weight. They are running just under the five-year average.

While exports to China might not be anywhere near the dizzying heights of three to four years ago when this market first started to accelerate - monthly shipments then were more than double the current amount - it's an indication of very strong foundations in a valuable market.

Given the geopolitical tensions playing out between Australia and China, the fact numerous Australian plants are still locked out of the market on technical issues and significantly reduced Australian beef production, the trade with China is in top form by all accounts.

China is among what Thomas Elders Markets analysts call beef's 'gang of four' - which also includes the United States, Japan and Korea. All showed gains in volumes bought from Australia during September to lift total flows by 3.5pc to 79,843t.

That figure is well below average on account of tight cattle supply. Forecasts are for Australia's total slaughter this year to be at a 35-year low. However, it is an improvement on volumes sent this time last year.

TEM reports it is the first time this year monthly volumes have outperformed 2020 levels. They are sitting 10pc above the September 2020 figure.

Japan continues to hold the crown as top customer, taking almost 21,500t in September. TEM reports Japan has accounted for just under 27pc of Australian beef exports so far this year.

The battle for second place is hotly contested with South Korea on 17.7pc, China at 16.5pc and the at US 16.3pc, Mr Dalgleish reported.

Underpinning that is a number of things, from economies rebounding from COVID-19 devastation to phenomenally strong US discretionary spending courtesy of stimulus money.

However, ongoing liquidation of the Chinese pig herd as new variants of the deadly African swine fever emerge, is the big lever.

"It has now become an economic liquidation. Small operators are exiting the market as viability drops off," Mr Quilty said.

"At the moment, Chinese hog producers are losing close to $66 per head.

"The Chinese government has moved down the path of expanding large operators, but the problem with that is those operations are also under water and it will take another three years at least to get back to normal livestock numbers.

"While that is occurring, it will drive global protein demand, and prices, higher."

At the same time, next year's global beef trade will be heavily influenced by tightening supply out of Brazil, Argentina and north America.

Production from these 'big three' was expected to be down 2.1m tonnes for next calendar year, Mr Quilty said.