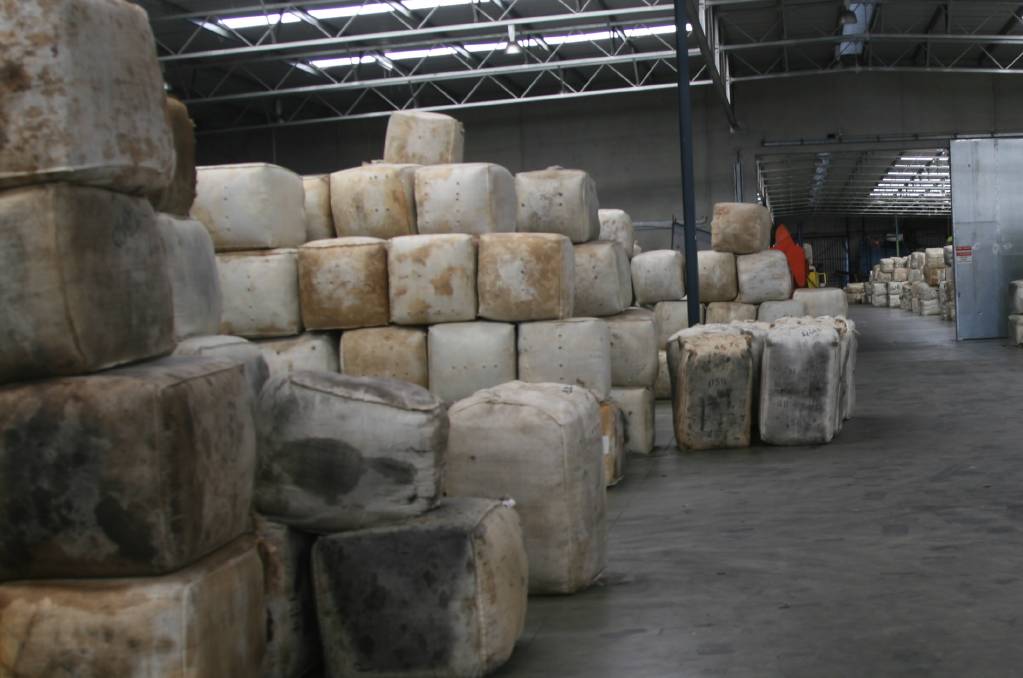 REPORTS of power rationing in China last month, followed by power cuts affecting manufacturing last week and a national holiday this week, did not appear to faze wool buyers at the Western Wool Centre (WWC).

Buyers last week seemed to ignore reports of much of China's manufacturing industry, including some textile mills, being shut down from Sunday for most of last week due to power cuts.

All of China's manufacturing industry has been shut down since last Friday - National Day of the People's Republic of China - until tomorrow (Friday) because of an extended public holiday to celebrate National Day.

Instead, wool buyers appeared to react to a much closer-to-home fundamental supply-and-demand situation at the WWC.

On the first trading day last week - pushed back a day because of the public holiday Monday - buyers rejected 40 per cent of the large 4656-bale offering put up by Nutrien Ag Solutions, Dyson Jones Wool Marketing Services and Australian Wool Network.

The problem was buyers had already seen and rejected 10.7 per cent of the fleece bales and 14.9pc of skirtings bales offered, at least once before last week.

They were not prepared to meet brokers' and woolgrowers' expectations on price, particularly for previously-rejected wools, when they had so much wool available to choose from and they knew that with spring shearing at full clip now, coming offerings will be awash with wools they have yet to see.

Similar price falls were recorded in Melbourne and Sydney selling centres, but despite substantially bigger offerings over there, the first-day passed-in rate in Melbourne was only 16.8pc and in Sydney 21.3pc after 431 bales were withdrawn before the sale to reduce the volume.

But on the second trading day at the WWC, Elders, Wool Agency, Australian Wool Holdings and Westcoast Wool & Livestock trimmed their catalogues back to a total of 3030 bales offered, albeit with more just-shorn new-season wool than the previous day's offering.

Early demand was soft, but then began gathering strength and momentum as the sale progressed and particularly after the Sydney selling centre closed, with competitive bidding sending last auctioneer of the day, Westcoast Wool & Livestock's Danny Ryan, hoarse trying to keep up.

"It (wool market) was up strongly on the previous day, we ended up having a much better clearance rate than was anticipated," Mr Ryan said after live auctions concluded.

"It was stronger towards the end - European interests jumped in and I don't think there was a (price) cap on some of the orders."

Early on during second-day fleece sales, AWEX's live screen in the WWC foyer showed a clearance rate approaching 30pc, but by the end of trading it was back to 20.8pc.

On both trading days names that normally do not feature prominently on the WWC's daily buyers' list - Meliwa, Michell Wool, G Schneider Australia - had bumped some of the larger traders down a peg or two.

Towards the end of the second day's trading Meliwa - which supplies mills in China - and some other small traders like Sequoia Materials were competing strongly with largest national wool trader Techwool Trading and Chinese indent company Tianyu Wool for remaining lots, particularly those at the fine end of the micron spectrum.

There was also keen interest from some buyers immediately after the sale in private negotiation with brokers on lots that had earlier been passed in.

That sudden surge towards the end of trading pushed the18 micron fleece guide back up 49c to finish at 2021c/kg, within 2c of where it had started the week.

But despite price rises on the second day for other micron segments, they all lost varying amounts of ground for the week.

Merino carding finished down 23c at 886c/kg for the week and the WMI ended up losing 37c to finish at 1360c/kg, compared to the benchmark Eastern Market Indicator which shed 31c to finish at 1337c/kg.

While the mood at the WWC was positive last week, there were underlying concerns about the situation in China - particularly about the lack of accurate information available on the impact of power cuts on woollen mills.

Some of the early reports, buyers said, had listed the world's largest early-stage wool processor and top maker, Tianyu Wool Industry, as one of the manufacturing plants impacted by power cuts.

But Tianyu's sprawling plant in Zhangjiagang City, Jiangsu Province, is these days powered by solar energy and not necessarily reliant on the electricity grid, Tianyu's WWC buyers Dave Cox and Zena Wareham pointed out.

Global media last week reported somewhere between "at least 15" and "dozens" of large Chinese companies had said in stock exchange filings that production had been impacted by power cuts.

"More than 30" Taiwan Stock Exchange-listed companies had reported the same problem for their manufacturing operations in China, according to Western media reports.

The reports said earlier power rationing and later power cuts for both domestic and industrial consumers were the result of a combination of factors.

These included China's central government ordering a start to cleaning up the local environment to demonstrate its commitment to a zero-carbon emissions economy by 2060, by capping coal-fired power generation, the reports said.

It has also been suggested that just as traffic was banned in Beijing ahead of the Olympic Games so international television coverage showed blue skies above the city, the output of coal-fired power stations has been limited by order of the central government so there are clear skies over the Winter Olympics in Beijing and nearby Shijiazhuang in February.

China's domestic coal supply is also said to be tight and its ban on Australian coal imports does not help that situation as the northern hemisphere heads into winter next month.

But as Endeavour Wool Exports' buyer at the WWC, Steve Noa, pointed out last week, "no power means no heating and that means people have to rug up in warm clothing".