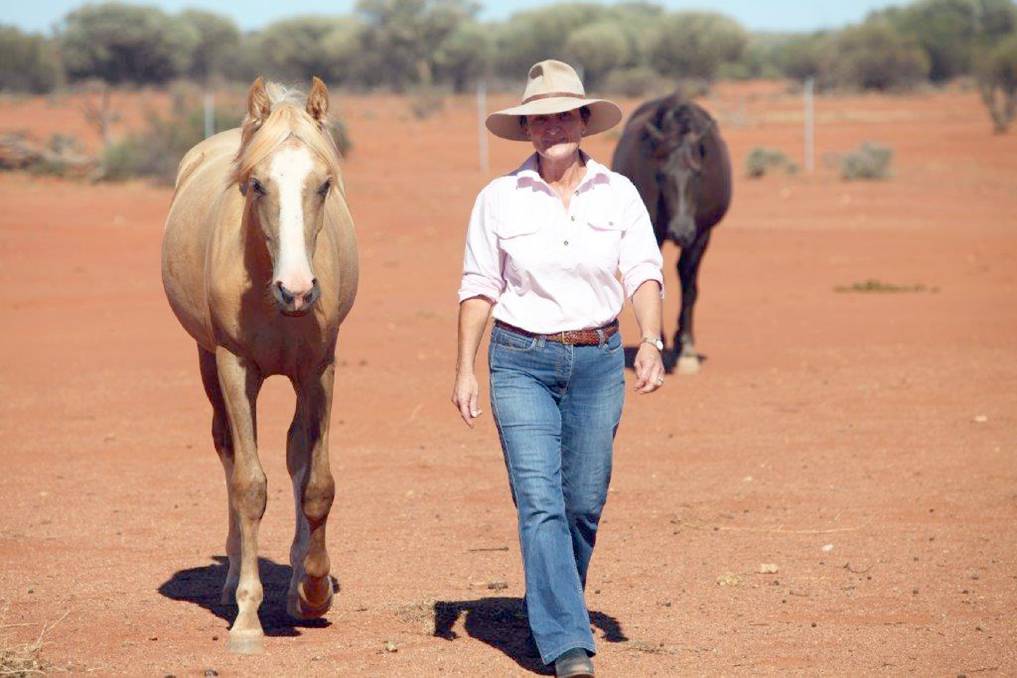 Pastoralist Debbie Dowden, Challa station, has been one of the key voices in advocating for wild dog management in the Southern Rangelands and lobbying the State government to endorse carbon farming for pastoralists. Photo by Lara Jensen.

FOR most pastoralists, drought is simply part of life.

Debbie Dowden, Challa station near Mt Magnet, is no stranger to drought and she said it's something that comes with living in the part of the world that she loves.

Ms Dowden owns and operates Challa with her husband Ashley, which has been in his family since 1888.

She has an active presence in the pastoral industry, particularly within the Southern Rangelands.

However, her prominence in the industry has risen in more recent years, as the majority of her adult life was spent educating their four children Pippa, Kate, Emily and Michael, through School of the Air and Mr Dowden would work the station.

"They were the good times - it was good having so much input into your children's education," Ms Dowden said.

Although educating and raising four children did have its challenges.

"It was challenging because I never really got a break from the kids - my mother-in-law helped until she and Ashley's dad retired and moved to Dongara," she said.

"Most parents complain about the stress of school holidays, but for us it was a relief because we didn't have to do school.

"Now that there's so many people educating children in lockdown, there's a real appreciation of what mothers in the bush have gone through for such a long time."

With their daughters having moved off the station and Michael still at boarding school, Ms Dowden said she's had the opportunity to pursue her own ventures, including undertaking the Australian Rural Leadership Program and studying a masters degree in environmental science, with her thesis being about community involvement in wild dog management across the Southern Rangelands.

This led to her starting the Southern Rangelands Pastoral Alliance, of which she is chairwoman, which has enabled pastoralists in the region to access funding and meaningful research.

And with her husband, Ms Dowden has been one of the key figures in the pastoral sector to lobby the State government to endorse carbon farming and allow pastoralists to capture carbon, thereby providing an additional/alternative source of income.

The pair have also helped to advocate for a wild dog cell fence for the Southern Rangelands and now the Murchison Regional Vermin Cell project is nearly completed.

Having migrated from England and grown up in rural Victoria and then jillarooing on Balfour Downs station, near Newman, Ms Dowden was no stranger to country life when she moved to Challa in her mid-20s.

It didn't take long for her to experience the challenges of pastoralism.

"When I moved here we were running sheep for wool and mutton and it wasn't profitable because the reserve price had collapsed prior to me coming, so every year we'd just about break even or maybe make a small profit," Ms Dowden said.

"Times were tough, it was pretty tight and that didn't give us the luxury of spending big or putting in a bigger power system or upgrading some amenities.

"It was challenging in terms of the economy, but my husband is really innovative and we started an aerial mustering business and then moved into earthworks, which we still do a little bit of."

Drought has a compounding impact on pastoralists as the finances take a hit and the emotional impact of seeing stock struggling or having to destock.

However, Ms Dowden said on her property drought was a way of life.

"The important thing for us is to manage the animals during drought and that's what we've done all along.

"This property goes back to 1888 and by the time I moved here, the Dowdens knew exactly how to manage drought - so apart from the financial strain, there was no other strain because as long as the animals don't suffer, the people don't suffer - that's the way I see it.

"As long as you are proactive when you see that there's not enough rain or not enough feed on the ground, you sell off your stock and just manage it."