The MUA notified Qube on Thursday last week that it was suspending its rolling stoppages after 11 weeks and had applied to the Fair Work Commission to have the dispute go into mediation. 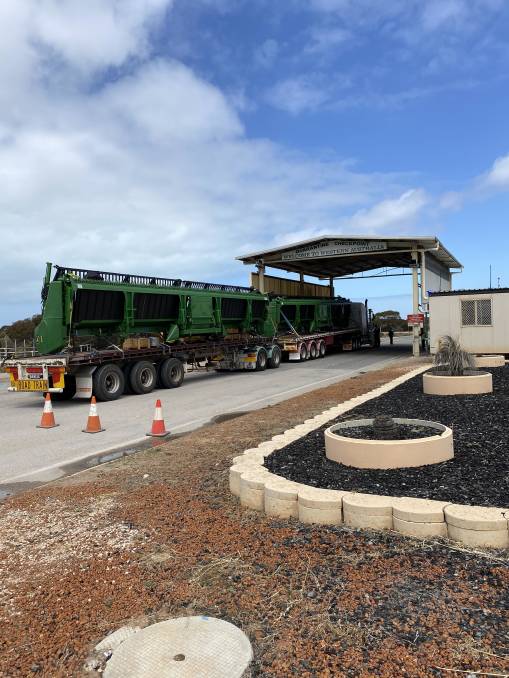 The sign above these header fronts on trucks stopped at the border says "Welcome to Western Australia" and they will be welcome for the WA farmers who are waiting on them after ships bringing them to Fremantle Port were diverted to Melbourne and Adelaide because of industrial action at the port.

A DECISION by the Maritime Union of Australia (MUA) to suspend strike action came just in time to prevent two more ships carrying agricultural equipment from being diverted from Fremantle Port.

The MUA notified Qube on Thursday last week that it was suspending its rolling stoppages after 11 weeks and had applied to the Fair Work Commission to have the dispute go into mediation.

The development meant that the MV Toreador, a 13-year old 61,328t roll on, roll off (RoRo) vehicle carrier and the MV Parsifal, a 10yo 75,251 tonne RoRo vehicle carrier - which would have most likely been diverted to Melbourne - were scheduled to arrive at their intended port of Fremantle on October 25 and October 29 respectively.

Both have cars, agriculture and construction machines and mining machines listed on their cargo manifests.

It is understood 80 per cent of the machines were agricultural equipment bound for WA - likely to mainly comprise combine harvesters, header fronts and tractors.

Both ships are operated by Wallenius Wilhelmsen, like the five vessels carrying similar cargos including 53 combine harvesters, 44 tractors, header fronts, other agricultural equipment, cars and mining and construction equipment, that were diverted away from Fremantle earlier this month to discharge cargos at Melbourne and Adelaide because of the dispute.

It loaded in the Port of Savannah, Georgia, in the United States before docking in Brisbane last week and was bound for Fremantle this week.

Some John Deere equipment was manufactured in Georgia and nearby Iowa, but it is not known what brand machines are onboard MV Parsifal.

MV Toreador called at Bremerhaven, Germany, Zeebrugge, Belgium and Southampton, in the United Kingdom, before sailing for Fremantle via Durban in South Africa and Reunion in the Indian Ocean.

Wilhelmsen said it had 50 cars, 60 agriculture and construction machines and 10 mining machines "in addition to a large quantity of parts and other machinery" onboard and confirmed it was due to arrive at Fremantle Port next Monday.

Wallenius Wilhelmsen Oceania senior vice-president, logistics services Kim Buoy said he was pleased the MUA and Qube were talking and "working positively" towards a resolution.

"Let's cross our fingers and hope they can find a resolution by the end of the month when the Fair Work conciliation process ends," Mr Buoy said.

"Who knows what will happen then, it might very well go back to being industrial action, but at least these two ships are confirmed to go to Fremantle." 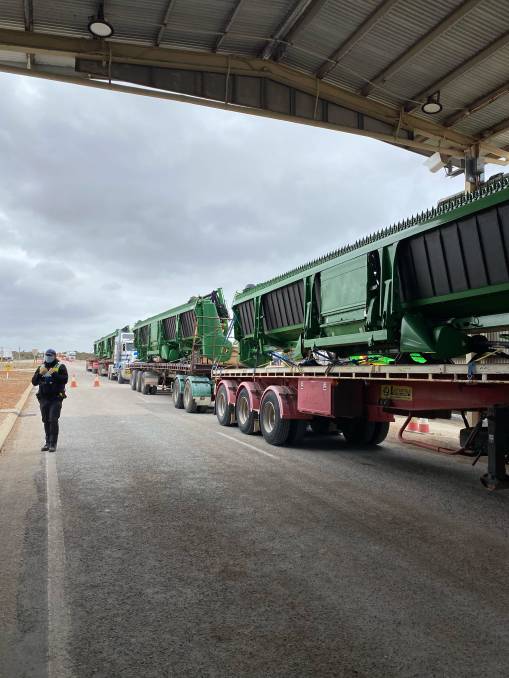 Queued up and more coming, delayed header fronts coming through the border checkpoint near Eucla on their way back to Western Australia from Melbourne and Adelaide.

MUA members employed as stevedores by Qube at Fremantle Port have been in dispute with their employer over 20 ambit claims yet to be resolved out of an extra 66 claims the WA branch alone sought to add to an updated enterprise agreement accepted by Qube employees at other ports around Australia.

The dispute has lingered since July 31 and threatened to impact some farmers' ability to bring in an expected record harvest that had already started in the Geraldton Port zone.

As previously reported in Farm Weekly, 53 combine harvesters and 44 tractors are being rushed back to WA from Melbourne and Adelaide in a mammoth logistical exercise across three States by equipment manufacturers, WA agricultural machinery dealers and trucking companies.

Valued at more than $50 million, all of the combines and most of the tractors were already purchased by WA farmers who ordered them 12 months and more ago.

One of the diverted ships earlier this month had been docked for 25 hours at Fremantle's RoRo berth but no stevedores were available during that time to drive the combines and tractors off the ship onto the wharf.

Four meetings have been agreed to by both parties as part of the Fair Work Commission conciliation process, through which the MUA has submitted 10 items as current outstanding claims.

The first meeting, held on Monday this week, went for six hours and resulted in no progress or resolutions in negotiations.

The other three meetings are scheduled for tomorrow and October 28 and 29 next week.

Qube Ports director Michael Sousa said it had been a "humiliating backdown" for the MUA officials in WA.

"They should apologise to the people of Western Australia and their own members for leading this pointless strike," Mr Sousa said.

"They have returned to work with nothing.

"They are under exactly the same conditions they have worked for more than 20 years and which have never been a problem before now.

"They are the same arrangements as the MUA national office accepted and have been agreed at 25 ports around Australia.

"Only the WA branch of the MUA wanted something different."

Qube said the strike had cost MUA members more than $1m in lost wages and, while the company welcomed the removal of the protected industrial action by the MUA, it was now witnessing "obstructive behaviour" that was affecting its operations.

"We are happy to participate in conciliation but after more than 25 meetings in 18 months are not confident anything will change on the part of the union," Mr Sousa said.

"In the past four days, we have experienced a record sick leave absenteeism rate nearing 25 per cent of our workforce, combined with a 30pc reduced productivity on vehicle vessels and a 70pc reduction in productivity on the bulk steel vessel by those who actually worked their shifts.

"We think this is an Australian record for absenteeism.

"We just want to pay our workers their $800 plus per day to do the jobs that they are employed to do.

"Qube will continue to endeavour to unload our customers' vessels despite the MUA's tactics to impact those waiting on cargo." 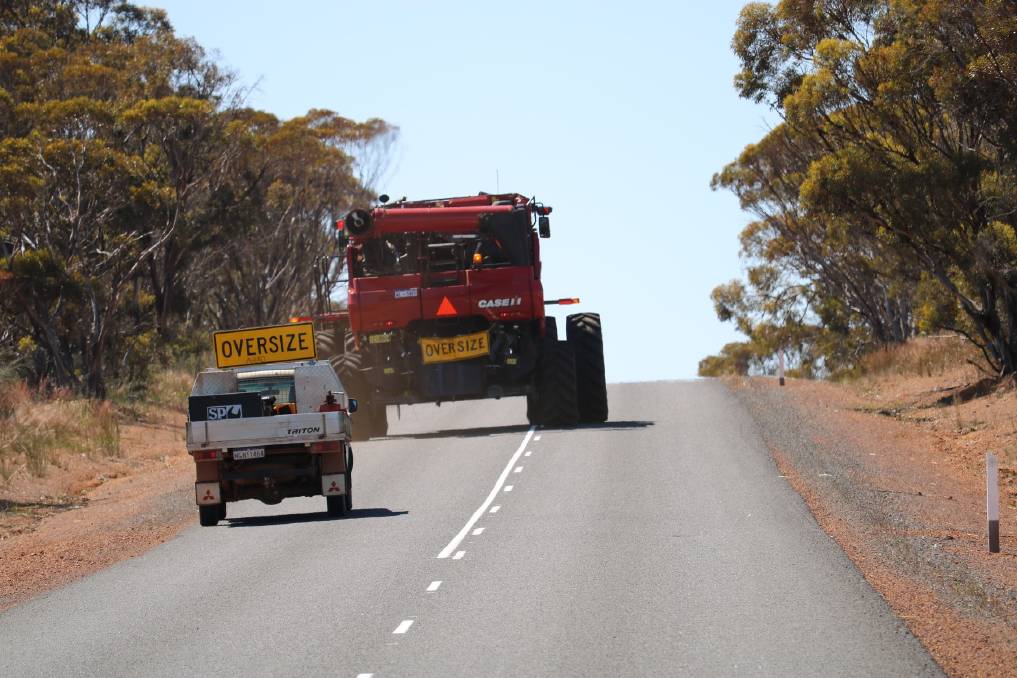 Mr Sousa pointed out Qube reached a national agreement with the MUA in August last year and the rostering times the MUA WA branch want brought forward two hours, have been in place for more than 20 years and have been agreed to by the MUA at 25 out of their 26 port operations throughout Australia.

Qube claimed the agreement accepted by its stevedores at other Australian ports provides them with "significant above award remuneration and conditions that align with the requirements of the sector".

It claimed its port workers at Fremantle are among the highest paid workers in Australia, earning on average $139,500 for 169 days of work a year.

The State government welcomed the decision by the MUA to suspend its industrial action at Fremantle Port following further negotiations with Qube.

"We understand that the matter is again before the Fair Work Commission for conciliation," said WA Transport Minister Rita Saffioti.

"We encourage the parties to work towards a resolution to finalise their bargaining agreement."

Prior to the MUA suspending the strike action, Ms Saffioti said she spoke and wrote to Federal Industrial Relations Minister and WA senator Michaelia Cash last week asking her to intervene in the dispute.

She pointed out the dispute came under the Federal Fair Work Act and said her request last week to the FWC to intervene to resolve it "was not a formal application" by the State government.

But Australian resources and energy group AMMA, which has been running commentary on the dispute, last week claimed regulation 3.10 of the Fair Work Regulations allows the minister responsible for industrial relations in a State to make an application under section 424 of the Fair Work Act.

Section 424 allows the FWC to suspend or terminate protected industrial action on the grounds of significant damage being caused to the Australian economy or part of it, AMMA claimed.

"Western Australia has a clear pathway to apply to the FWC to cease the industrial action on grounds of serious economic damage," said AMMA chief executive Steve Knott.

If the MUA were to resume their protected industrial action following the Fair Work Commission conciliation process they will be required to give five working days notice.