Wheat is a major focus of the program this year with 8609ha covered from the five varieties of Ninja, Scepter, Havoc, Vixen and RockStar.

AT a third of the way through harvest, good clean wheat looks to be the major result for the Sutherland family.

Based in the Dalwallinu shire, Wilgie Farms is a mixed cropping farm on 15,695 hectares of arable land.

Wheat is a major focus of the program this year with 8609ha covered from the five varieties of Ninja, Scepter, Havoc, Vixen and RockStar.

They also seeded 5421ha of Spartacus, Buff and Rosalind barley and 1665ha of Bonito canola, but the wheat is the star this year.

"Last year the barley was clean and the wheat was dirty, but this year it's been the opposite - dirty barley and very clean wheat," said owner and third-generation farmer Paul Sutherland.

Mr Sutherland has always leaned towards a wheat-dominant program, not experiencing many issues.

"We haven't had a problem with disease like others have, it's always been pretty good to us." he said.

Overall Mr Sutherland is very pleased with the year, recording the best yields he has seen for a while.

Shane is the one who heads up the cropping program each year.

"Shane is really into all of that, so I let him take the lead," Mr Sutherland said.

Taking an interest in new varieties and chemicals, Shane attends the Liebe group post seeding field walks, along with the other full-time siblings.

"I would definitely recommend to all my mates to attend the field days," Shane said.

"You gather very good information that can be incorporated into your program.

"We also sat down with the agronomist and came up with about seven different chemical ideas for the wheat and four to five different ideas with the barley and it's kind of just taken off from there.

"From the past few seasons I've seen the cheaper products not producing as well as the expensive products."

This year they also added in RockStar to their wheat program, but it hasn't performed as well as Havoc.

Ben, 17, has been leading the night operation.

Managing a team of six, he makes sure everything is running smoothly.

The night shift team started RockStar late last week and noted it was down 0.7 tonnes a hectare compared with the other varieties.

Shane attributes one possible reason for lower yields was it wasn't seeded as early as he would have liked, but has found Havoc is making up for the lower yields from different varieties.

"Havoc is really good for the heavy red country and we've got a lot of it over that," Shane said.

"You can grow really nice crops on red country in a wet year."

Shane also noted how Rosalind barley had performed this year, saying it weighed lighter than other barley varieties.

Sitting in a sweet spot this year, Wilgie Farms has been fortunate in missing a lot of the heavy frost that has devastated crops in the region.

But despite that they are unsure of final yields as there are pockets throughout that have definitely been affected. 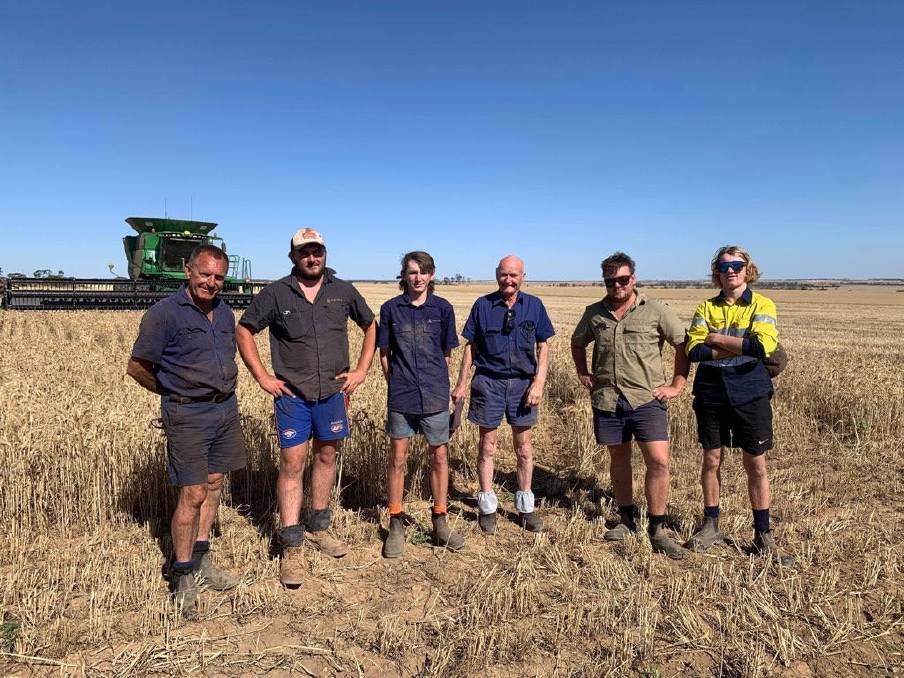 Farming runs through the veins of the Sutherland family. Paul Sutherland (left), is with four out of his five sons Jack, Dale, Shane and Ben, and his dad John (third from right).

Rain has also been a tricky thing to navigate.

Last year the farm recorded 147 millimetres in the growing season and 297mm overall.

This compares to 297mm for the growing season and 492mm for the year-to-date, which is well above average.

"Spraying post-emergent was pretty difficult with it being so wet, the machines were too heavy - we did lots of half loads just to get on the paddocks," Shane said

"It's a good problem to have, I guess, we still seem to be getting dry finishes in September though."

In the most recent rain event, the farm recorded 25-30mm, but this was followed by warm days, seeing the ground dry out quickly and not hampering harvest for too long.

With four full-time staff and 18 casuals, the Sutherland family has had no issues with finding harvest staff, despite the reported shortage.

Taking a GenZ approach to hiring, Shane put a call out on Gumtree at the start of harvest for casual backpackers.

"We put the add up and in minutes had applications streaming in," he said.

Offering the workers a casual rate, or a contract to see them over the season, they have had a higher rotation of workers than usual due to the unexpected rain.

"Those that chose the casual rate, moved on quickly because of the rain, which is a shame, but we were able to replace them relatively quickly once it dried out again," Shane said.

Farming has long been in the veins of the Sutherland family, with Paul's grandfather Lois Arthur Sutherland working the land at Wenbella, Pithara, in 1928.

Married to Jessie Della Sutherland, the pair purchased Wilgie Hills in 1938 and the family is still farming that land as well as at east and west Dalwallinu, Watheroo, Wubin and Nugadong.

Mr Sutherland's other sons Luke and Jack are both mechanically-minded and are crucial in ensuring the smooth running of the farm.

As a heavy diesel mobile plant mechanic, the family relies on Jack to keep the gear rolling all year round, while Luke can be found managing the Wilgie Contracting Company, busily carting grain and next year's liquid fertiliser for his clients.

Mr Sutherland's father John, who was coy on his true age, is still working on the property and this year celebrates his 69th harvest, working eight to 10 hours a day.

IN 1952 John Sutherland left school for his first harvest and this year sees him celebrate his 69th harvest. John Sutherland is celebrating his 69th harvest this year, he still works a 10 hour day and is pivitol in training the backpackers each year.

Still operating the header and carrying out eight to 10 hour shifts, John shows no sign of slowing down.

Growing up in Pithara and living in Dalwallinu with his wife Betty, John took over the farm from his dad Arthur in 1962.

Over the years, he developed the farm to 4200 hectares which his son Paul officially took over in 1994 and has since expanded to 15,695ha.

Originally a mixed enterprise of cropping and livestock, John has seen a lot change over the years.

Sitting now in the airconditioned cab of the header, he retells the story of harvesting back when the had to pack the bags himself.

"The bags of wheat would come up to my chest," John said.

"When they were full you could barely move them.

"Back then you would be lucky to do one tonne in a day, now the boys are moving triple that in less than an hour."

With a big grin on his face and a cheerful disposition, the seasoned farmer has weathered many years of farming successfully and is very proud of the legacy he leaves.

"I think they can't wait till I stop harvesting," he said.

"But I love being out here, it keeps the mind active, when you stop working and don't get out and about, that's when you slow down."

Over the years John has seen a variety of harvests and has seen patterns emerge.

"You have a few bad years, followed by maybe five good years, then a couple of exceptional years, before it loops again."

John is the go-to man for all things machinery training, still teaching the backpackers how to work the header and chaser bin.

His wisdom and knowledge have not only helped the seasonal staff, but have been an inspiration for his grandchildren who love working alongside him every year.

"It's an absolute pleasure to work alongside him for as many years as I have," said grandson Shane Sutherland.

"I can remember learning so many valuable lessons about farming from him over the years and am still learning so much."

When he is not helping out during harvest, John is heavily involved in the local community.

Driving a bus during wildflower season, he loves to share his knowledge with visitors to the region and have a good yarn.

Along with Betty, they have developed and participated in many community sport events over the years, including tennis and football, originally in Pithara but now in Dalwallinu.

While Pithara was once a thriving sporting community, all that has long gone as farms have become bigger and many of the local communities smaller.

"The loss of community is sad, people have grown their farms for good reasons, but it means these towns don't have the people and community they once did," he said.

"Wilgie Farms, for example, used to have five different farms and families and now it's just one."

John imparts a strong sense of community in his whole family, with his children and grandkids all involved in the local sporting teams.

With no trouble getting around the farm, it looks like there will still be many harvests to come for this well-loved, and exceptional farmer.