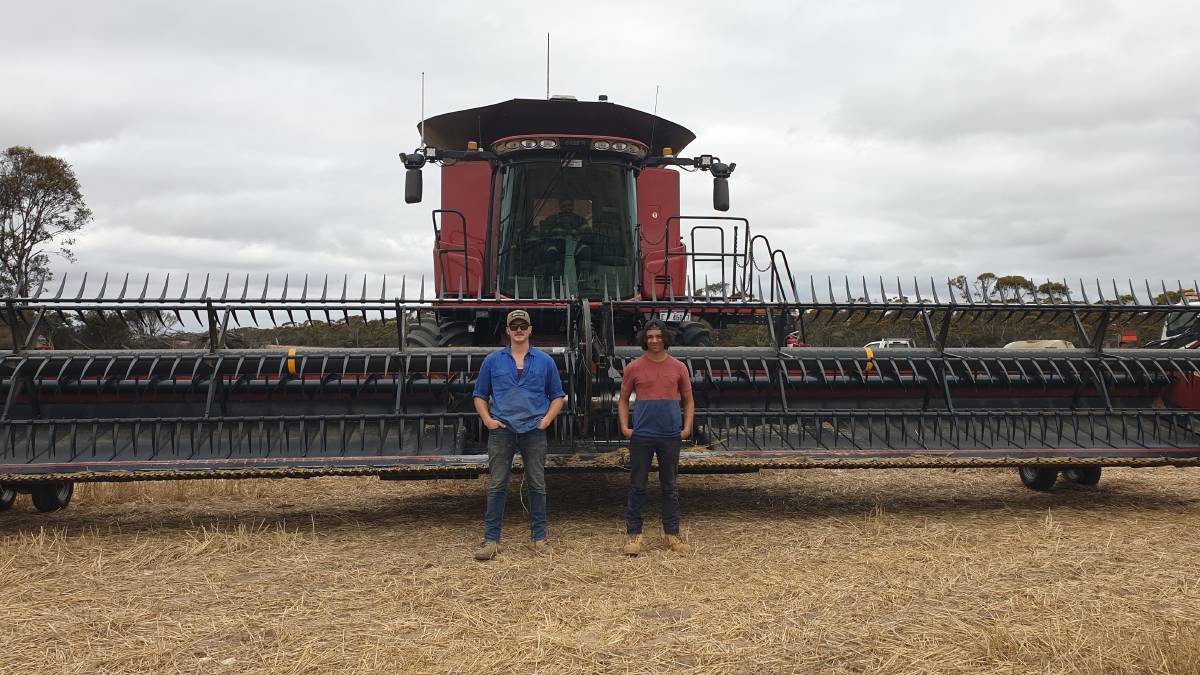 Henco Maree (left) and Daniel Allan have been given the opportunity at Sanderson Farms' 6000 hectare operation while completing Certificates II and III in agriculture.

At the beginning of last year John Sanderson started looking at getting a New Zealander over for seeding and harvest, as they can keep coming back, but then COVID hit, forcing a rethink.

WITH a combined age that is only a couple of years older than their boss, two young trainees are bringing youth and enthusiasm to the Sanderson Farms operation.

Owned and run by the Sanderson family, the farm has a total cropping program of 6000 hectares split between properties in Grass Patch and Varley plus a share farm in Cascade.

Even before COVID-19, John Sanderson found securing labour a hassle.

"We were getting backpackers in for seasonal work and we did get some really good people, mainly from Europe, but the worst thing about European backpackers is you get one or two seasons out of them and then they're gone," Mr Sanderson said.

"You put all of this effort into training them and you very rarely got that back, plus you were constantly having to teach new staff the same stuff."

At the beginning of last year he started looking at getting a New Zealander over for seeding and harvest, as they can keep coming back, but then COVID hit, forcing a rethink.

Mr Sanderson called the Esperance Senior High School farm to look into the idea of taking on a trainee, putting them through a Certificate II and III in agriculture and offering them a full-time job at the end of it.

The initial plan was for Mr Maree to do a cert II in year 11 and a cert III in year 12, but some difficulties getting the cert II up and running last year, meant he instead went out and did seeding and harvest with a bit of work in between to gain experience.

"Henco wasn't struggling at school curriculum-wise, but he was struggling to focus in class and I was exactly the same at his age, so I had sympathy for that," Mr Sanderson said.

"At the end of last year we had a talk with his parents and the school and all decided it was best for everyone if Henco left school and instead of completing year 12, came out to do an onfarm cert III with us, which he completed just a few weeks ago, before harvest started."

For his part, Mr Maree's family have a small hobby farm at Dalyup, but he also spent the majority of his childhood out in Cascade with his dad, who was a farmhand, sitting in the tractor with him during seeding and harvest.

He always knew that farming was what he wanted to do, so when the opportunity to get involved in the industry came up, he lunged at it with both hands.

"It made the decision to leave school a lot easier having the guarantee of some sort of certificate and qualification to my name as I think that's really important and I'm really proud of it," Mr Maree said.

"We've had our hard times weather wise, as you do in farming, but I believe this is absolutely the best thing I could have done for myself.

"They've looked after me here for the past two years - I love this place and I like the farming operation that they have running, so as long as John will have me, I'll be here."

When Mr Maree finished his Certificate III he moved into a full-time role, joining Gavin Millard who has been there for six years.

However, that left a space open for a new trainee and Mr Sanderson was keen to keep the education ball running.

"I used to be a mechanic and we always had a first, second, third and fourth year apprentice at all times, so often the fourth year would finish and move on and a new first year would start," he said.

"I wanted to try and bring that same idea back to agriculture, so as we have a trainee finish, we put a new one on and if there's no position here for them at the end of it, or if they don't want to stay on this farm, then at least they would still be able to stay in the industry.

"There is a shortage of labour in the industry and there is this untapped resource of young men and women coming out of high school who either lack direction or want to go farming but don't have the opportunity, so we're trying to provide an option for them."

With that in mind, Mr Sanderson, and his father Dan, attended a presentation at Wongutha Christian Aboriginal Parent-directed School (CAPS), the other agricultural-based school in the Esperance area, as part of an initiative from South East Premium Wheat Growers Association (SEPWA), delivered by Tom Carmody, on the opportunities available.

While all was quiet in the room at the time, as is often the case at a school presentation when everyone is a bit shy, Daniel Allan, 15, had his interest piqued and was soon put in touch with the farm.

The plan is for Mr Allan, who is in year 10, to do work experience over harvest and the school holidays, with him spending Monday and Wednesday at Wongutha CAPS, then Tuesday, Thursday and Friday, as well as some of the weekend, on the farm.

"I'm really enjoying being on the farm, learning the information and building relationships with people I would never have normally met," Mr Allan said.

"I look up to what Henco has done in achieving his qualifications and hope to do the same as it will give me more opportunities in the future."

"Henco seeded probably 70 to 80 per cent of the program by himself earlier this year, he owned that operation and now he's doing the same with one of the harvesters," he said.

"Meanwhile Daniel has picked up the chaser bin like a duck to water, so when my blokes are having their rostered day off, he jumps on and fills that role.

"Knowing I've got these good young people who are keen to be here is a weight off my shoulders and it feels good to invest in our own country and our own people."